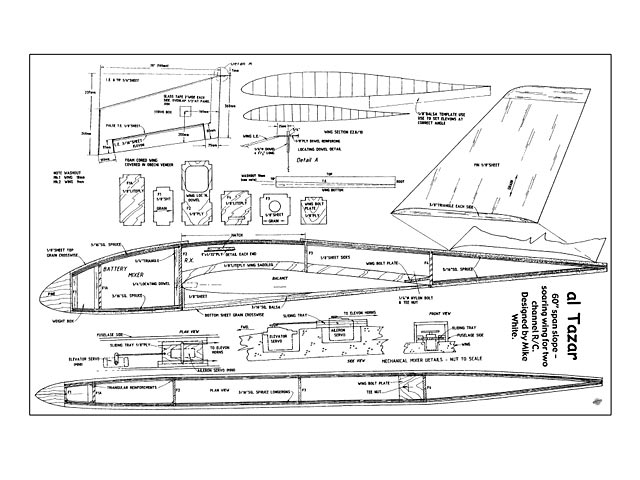 Quote: "60 in span R/C slope soarer for two channels and foam wings. This simple RC slope soaring wing is a great flyer - even in the teeth of a gale. Al Tazar, by Mike White.

When I arrived on the slope for this models' first flight, the cloud was blowing in and the visibility was sometimes down to 50 - 100 yards. It would then clear and you could see for miles, but only for a few minutes. Then the next lot would arrive, and with it the wind of a good fat 35 mph -and I could only just hold the model in my freezing hands.

Previous to this I had only tried a few trimming flights in dead calm conditions and these were over long, crash-cushioning grass. Needless to say, I hadn't put much grunt into the launches. Indications that trim was reasonable were unconvincing, as each mini flight ended with a flat, no lift, pancake and a model covered in sheep sugar! I went back to the workshop and again checked out my calculations. This was my first flying wing design and over several years I had gleaned information from model magazines and kept a file on it. There wasn't very much, as it seemed that this 'black art' was kept locked in somebody's secret file but, I hoped that I had enough. It seemed to me that longitudinal stability was dependent on the amount of washout built into the wing and the position of the balance point. Also of importance was the amount of wing sweepback.

As I stood on that slope face then, being buffeted by the freezing wind, I wondered if I really liked doing this but decided that, as I was there, I had better do something about it. I was also thinking that if I launched the model it would go up into a loop and back over my head before I could duck. But I had come up there to fly it - and fly it I would! I had set in a little up elevator trim just in case the belly flops encountered on those first trimming flights were a true indication of its flying ability. Okay then, this is it - and out it went, sweet as a dream and straight as a die, in a gentle climb. Rock steady too. I zeroed the trim and the speed built up a little so I tried a roll, which needed quite a bit of down elevator at the inverted position. The roll rate slowed appreciably and it later hit me that this was because controls were elevons and as down elevator was applied, it reduced the amount of aileron movement. There is no way around this, unless separate ailerons and elevators are used. I now tried a loop and, although it went over, it only just managed it. By now I was really freezing, so called it a day - a very good one I thought.

Back home again I rechecked the balance and decided that next time out I would remove a little nose weight after each flight until things started to happen, that either frightened me - or I just did not like. So it was that a few days later the weather cleared, with a little wintry sun and no low cloud. For the first flight I changed nothing as the wind was not so strong as on those first flights, at only 20 mph. Just as before, it flew as if on rails, but loops were still not easy to do. Either the balance was too far forward or the elevator movement was too great, which would slow the model too much as it went over the top, or a combination of the two.

I removed half an ounce of lead from the nose and she became more buoyant and loops became easier to do and, with some more up elevator introduced from the rate switch, with a smaller radius. Stalling was a non-event, the nose rose a little, a nod occurred with no height loss - great!

An additional half an ounce of lead was removed and I wondered if this time it was too much. Nothing ventured. The balance now was a tad too far back as, as soon as I even thought of putting the stick forward, down went the nose. Up elevator was not so sensitive but loops were peachy. Rolls on both high and low rates were also good. Inverted flying with the forward balance required quite a lot of down elevator.

One more spectacular then, before a good warm up and a cup of tea. I took the wing up as high as it would go in the lift available, put in maximum rates and pushed the nose over. When it was going straight down at what must have been its terminal velocity, I cranked in full aileron. Round it went in a super corkscrew manoeuvre not increasing in speed, or diverging from the centre axis. Eight times it went around and when it was quite a lot lower down in the valley than the spot at which I was standing, I pulled up and managed to get five rolls before it stopped flying. Another great day. Yessir...

FLYING AND TRIMMING: Without wishing to suggest, even mildly, that flying wings are difficult to trim so that they fly properly, it must be said that they are different from a model with the more conventional layout with a tailplane. If a flying wing has elevons to effect pitch and roll control, as opposed to elevator and aileron which some do have, I would suggest that there can be only one correct longitudinal balance point. In the case of the flying wing section, the trailing edge has an upward reflex which is part of the design to produce a low value pitching moment. All lifting sections produce a pitching moment, to a greater or lesser extent depending on the amount of camber of that section, and it is this which makes the wing pitch down.

If the balance point of a flying wing is not in the correct position, the elevons will have to be trimmed either up to produce a longitudinally level flight path. This trimmed position will, therefore, affect the value of the pitching moment and can, if the balance is too far aft, result in a nose down pitching which may well become uncontrollable. There is, of course, a small range of movement for the balance point, but it is very small indeed, approximately 3 to 4% of the mean aerodynamic chord, much smaller than that for the aircraft with a tailplane, So it is better to start with the balance point exactly as shown on the plan and.change it only by very small increments and only if you think that it is really necessary..." 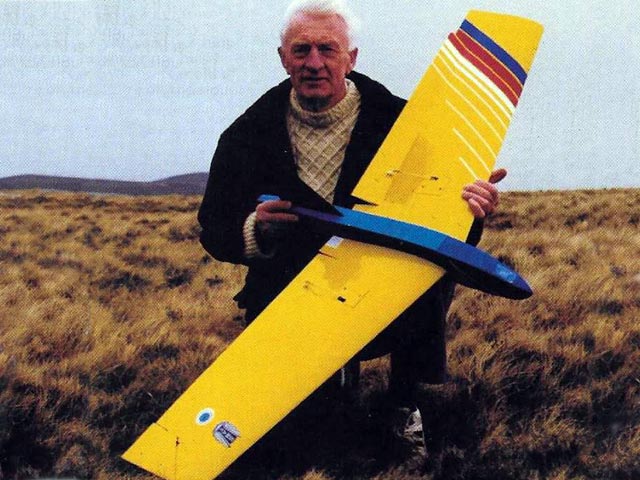