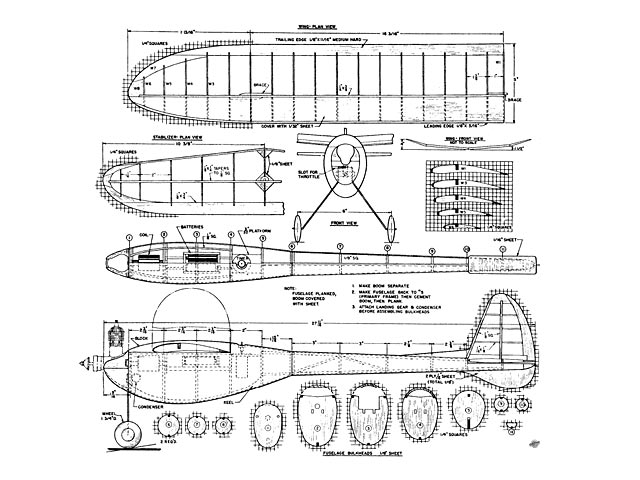 Quote: "THIS is an example of what can be done with one of the hottest of the postwar motors, the Arden. The Giant Killer is 'one of the biggest little models ever built' and we guarantee that, for its displacement of .097, it will come mighty close to beating planes with engines whose displacement puts them at the upper limit of Class A. The Giant Killer has one of the smallest engines on the market, yet it is approximately as big and as heavy as a ship powered by, say, an Ohlsson 19 or the .199 Bantam. The ship has to be that big to handle the power of this very hot engine.

The story of this unusual airplane began with the strobotac tests which the editors make on all new engines. The ability of the Arden to swing an eight-inch diameter propeller at 8,600 rpm and a nine-inch prop at 6,800 suggested an experimental ship to find out what could be done with airplanes designed around such a powerhouse. Under the rules, such a ship must have a minimum weight of 7.76 ounces and a wing area of at least 110.8 square inches. Given a six-to-one aspect ratio, that would mean a wing of less than 30 inch span. We defy anyone to handle such power on such a small ship.

Lacking precedent, we simply made the ship a little smaller and lighter than the biggest Class A jobs. We were afraid that any wing with less than approximately 220 square inches would be too hot to handle. This meant a minimum weight of approximately 15 ounces, which is double the allowable power loading. If the rules were not obsolete in the light of these new powerful motors it would not be necessary to handicap unfairly a fine powerplant, by compelling it to fly at double the power loading of competing ships. Yet it will compete on even terms with any big Class A model and should beat the pants off any of the smaller jobs.

The author would like to mention that Bill Winter did the three-view and the general specifications and that Walt Schroder carried the design to the point where I was asked to build and try the model. There are a number of things about the construction that will bear explanation. The fuselage consists of a pod and boom. The pod is planked, with 1/16 thick strips about 1/4 in wide, and the boom is covered with 1/16 sheet balsa wrapped around its inner structure.

The wing is conventional, as is the tail. Theorists may be interested in the force diagram which features a shoulder wing located close to the thrust line to minimize what would be severe stalling and looping tendencies with such an amount of thrust. Weights are purposely located high in the fuselage to insure spiral stability in power turns.

The bulkheads should be assembled upon the bottom keel, after which the battery tray supports and the wing supporting strips should be fastened in place. This procedure insures an accurate alignment of the pod. In fact, it helps to install the timer mount at the same time. The next step, and this is important, is to make the boom frame just as you would make one side of a box fuselage, that is, it is assembled over a plan on the bench. The boom frame is then inserted through the rear face bulkhead #5 on the pod. Note that the lower member of the frame rests on top of the keel and butts against the rear of bulkhead #5. After the pod and boom have been joined together, insert the additional bulkhead #6 in front of bulkhead #6 on the boom frame..." 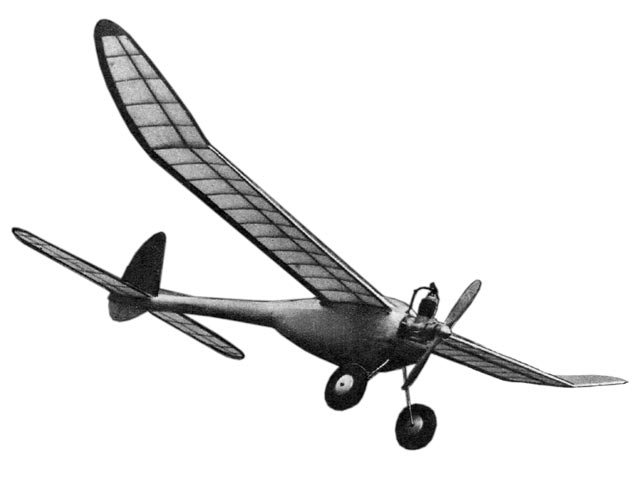