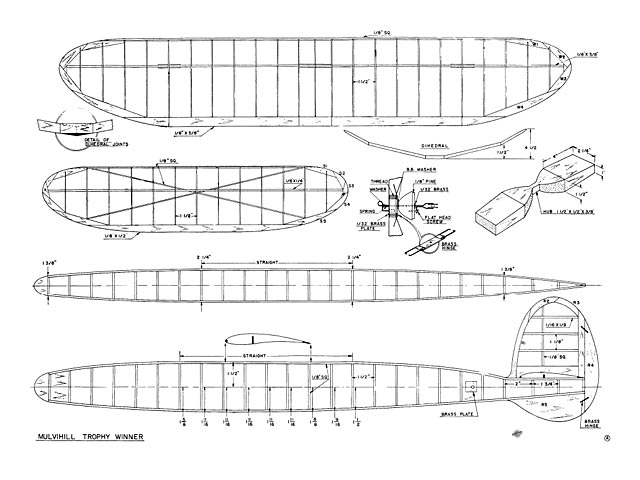 Quote: "How you can can build the high-time stick model winner of the 1941 Nationals - a consistent duration model in still air or in thermals. Mulvihill Trophy Winner, by Ray Smith.

EARLY in the spring of 1941 the third in a series of 200 square inch stick models developed by Bob Johnson won the Mulvihill Trophy. Its principal features are its 7 to 1 aspect ratio wing, strong construction, and extreme simplicity. This last factor is very important in any contest model, because it not only facilitates building but also permits quick repairs on the 'field of battle.'

The first model in this series was built in 1940 and was lost two days after com-pletion. It was a very simple job, with a freewheeling propeller and could fly three minutes without thermal currents assistance! The second model was somewhat more streamlined, with folding propeller and other refinements. This job took first place at our annual club invitational meet in 1940, with flights averaging 2:18 on a windy, overcast day. However, it proved that the model could do 3:15 in still air. A short time later, with only one flight, it took fourth place in another contest.

The third in this series, the Mulvihill Trophy winner has a very low aspect ratio wing. The efficiency of this wing may be questioned, but it has several advantages, such as. lightweight, stronger, easier construction and less susceptibility to warping. It glides slowly at a ratio of 7 to 1, giving the ship a low sinking speed.

On its maiden voyage the model was lost after four minutes: several clays later it was found about 9 miles from its starting point. The following Sunday, two flights were made, one for 10:04 and the other for 6:33. after which it disappeared from sight.

Another ship was completed in time for the Chicago Spring Record Trials. However, after a test flight of 16:04 it was damaged on landing. It was repaired and entered in the annual meet where it flew out of sight after 7 :22, receiving fourth place. Ray Smith built another in time to enter it in the Nationals, where it won the Mulvihill and CW Rogers Trophies. This model averaged a total time of 1184.5 seconds and a long single flight of 15:26. Bob Johnson received eighth place in the Junior Division with the Sallie design. In all, four models have been made from this design; six out of sight flights were made and all the ships were lost except one.

CONSTRUCTION: Before starting construction the plans must be scaled to full size. Note that the drawings are scaled 1/4 in = 1 in. The plan may be enlarged in one of three ways: photostating, laying it off with a divider, or using a rule. Spread a sheet of wax paper over the drawing to prevent cement from ruining the plans. If you use the grades of wood suggested in this article, your model will probably weigh less than 6 oz. Make up the additional weight required by adding more rubber.

FUSELAGE: Pin the 1/8 sq hard balsa longurons to the fuselage outline of the full scale layout, being careful not to split the wood. Cut the cross braces and cement them into place. After allowing sufficient time for drying, build the other side directly on top of the first. This insures perfect alignment. Remove the completed sides from the plan and join them together, as shown in the top view of the plan. It is to your best advantage to work slowly and carefully. Hard balsa fill-ins are added to nose and tail, as illustrated, and the brass plate is inserted for the rear hook.

WING CONSTRUCTION: Cut 23 ribs from 1/16 light quarter-grain stock. Pin the ribs together and sandpaper them as one unit to insure uniformity. Then cut all notches with great care. Cut wing tips from 1/8 sheet balsa according to full size patterns.

The wing is now ready for assembly. Pin the main spar and trailing edge onto the drawing in their proper positions. The trailing edge should he cut from vi.ry light quarter-grain 1/8 sheet. However, at the center section it should be very hard..." 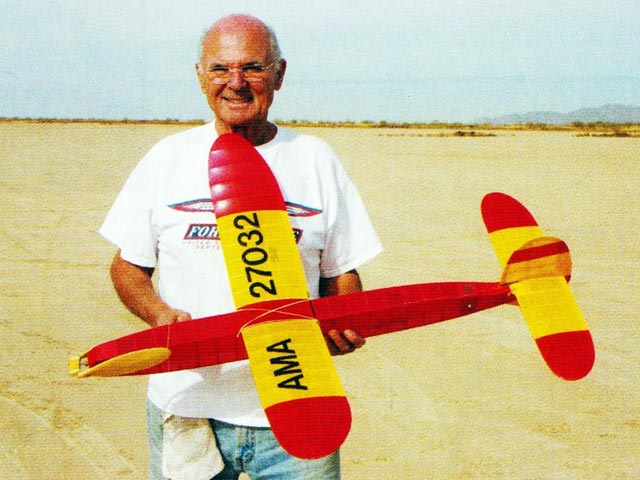