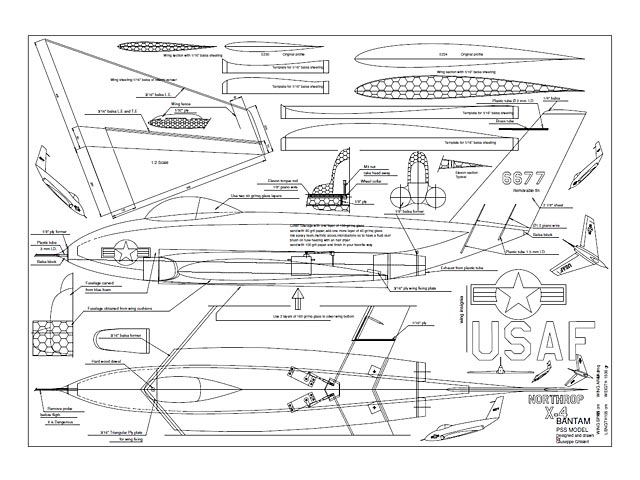 The subject Northrop X4 Bantam was a 1948 prototype twinjet aircraft. With no horizontal tail surfaces, it used combined elevator and aileron surfaces (elevons) for control in pitch and roll.

Quote: "Please find enclosed a DWG of a model of mine. This model has been published in Italian magazine Modellismo and in RCM&E. You may find some good pictures on the English magazine.
Ciao, Beppe Ghisleri"

Note the 'original' drawing here is the CAD zip download. That's the file that Giuseppe sent us, and that is his design, his work. The PDF file you see here, conversely, is only a pale reflection of the CAD drawing. That's because I made it, from the CAD file, just so that we have a PDF file in this slot, for Oz users who don't have CAD software or a CAD viewer. But exporting from CAD to PDF is not my greatest skill, so if anyone out there can create a better, clearer PDF file from this, we'll happily use that. Steve. [edit: this is fixed now, many thanks to RusselH]

Note for more details, there is a good page with pics at https://www.glide.net.au/flyingwing/x4.htm that includes some build article text on this design.

Quote: "Some 200 metres to the right of our launch site at Grone the land falls abruptly for 900 metres to the bottom of the valley forming a rocky precipice which is exposed to direct sunlight. As a result of this you can invariably find very strong thermal activity in the early afternoon. All I had to do therefore, was design a model that would fly in strong thermal lift without having to rely too strongly on wind.

A large, high aspect ratio aeroplane would have been the logical choice, say a U2, or a B52, but as am sure you know, we modellers seldom make the most obvious or informed choice especially if there's a particular aircraft that we fancy building. At that time mine was the Northrop X-4 Bantam. which I first saw in a book on the F89 Scorpion.

In June 1946 Northrop received an order from the U.S. Air Force for two X-4 aeroplanes. Their task was to investigate the manoeuvrability of tailless aircraft in transonic flight (beyond the speed of sound). Its design was influenced by the German wartime Me 163 Komet and from the de Havilland 108 Swallow.

It reached mach 0.94. but at this speed it had serious stability problems. The wing was very stiff, with a loading factor of 8G. Overall the aircraft was very manoeuvrable and could do loops and rolls and other aerobatics with ease. It was powered by two Westinghouse jet engines, each rated at 725 kg of thrust. The canopy had no stiffener and it was the first X-plane to have a seat which could be jettisoned.

The model: Using the reasoning that a flying wing would be quick to build with low drag, I decided on a wing profile to use and got started.

The wing chord at the root is more than twice that at the tip. The cutting of the wing cores is therefore a tough job. Having ruined two sets I decided to bring in a friend of mine who owns a computer driven cutting machine and eventually got two perfectly cut cores that required only sheeting. Luckily Nexus can relieve you of this particular burden by supplying a set of obechi veneered foam wings for a very reasonable £14.60 plus p&p. The root profile is an E224, which changes to an E230 at the tip. According to Mr Eppler, a wing with a sweep of 1-1/2 mean aerodynamic chord, employing an E222 at the root and an E230 at the tip is aerodynamically stable and does not need any tip washout. Although I didn't have the required sweep-back, I used E224 as root profile in order to give an equally stable wing with less sweep-back.

If you opt to make your own you will need to sheet the cores with 1/16 balsa or with obechi veneer. Cut the elevens and face the leading and trailing edges with 3/16 balsa. Note that the elevons are operated via a torque rod passing through a 3mm hole which must be drilled from the bay to the elevon itself. Bend 3 mm O/D piano wire to form a torque rod and face the emerging ends of foam with 1/16 ply to act as a bearing for the rod. Note that the rod is bent at 90° only cne end (the outer end). Insert the torque rods. glue together the wing halves and band with glass as is standard on most power models. install torque rod inner ends as desired using your preferred arrangement. I chose to mount a wheel collet fixed in place with a long bolt. Glue and shape the wing leading edges and wing tips. The wing fences are cut from 1/16 ply. Complete the wing by gluing the hardwood dowel for the wing mounting.

Fuselage: The fuselage is made with blue foam and glass in a very similar way to the 'lost mould' technique, the only difference being that the mould is not dissolved afterwards. Instead I prefer to leave a hollowed core inside which avoids the mess of dissolved foam and leaves a lighter construction as you are able to use less glass..."

Update 09/09/2019: Replaced the PDF here with a much better exported version of the plan (in PDFvector format), thanks to RussellH.

Quote: "Hi Steve, Your wonderful website is as addictive as ever. To show my continued appreciation I have attached a nice sharp PDF rendition of the Northrop X-4 Bantam plan, in case any of my fellow Outerzoners want to give it a go... Best regards, Russell" 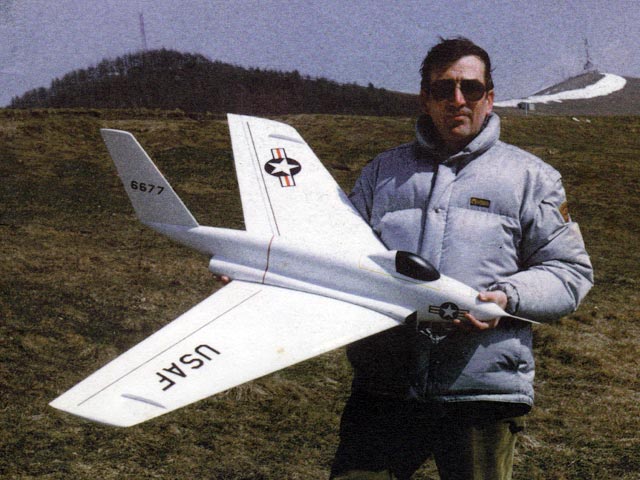 Steve, for people who would like to (but think they can't afford to) use the CAD drawings, there are a couple of excellent freebies out there. Inkscape is one (and it also has plugins that let it be used with a laser or CAD router) https://inkscape.org/ and there is also Librecad https://librecad.org/
Daithi - 07/09/2019
Thanks, I have installed Draftsight (free version) here, and I use that as a CAD viewer, which works fine for me. But doing anything beyond just looking at the plan... is opaque to me. So how to export to PDF at correct scale, for instance, is not obvious. So I end up creating a bitmap version of it, then scaling it in Photoshop. Which is frankly a terrible and shameful thing to do to a CAD file.
SteveWMD - 08/09/2019
I'm sorry if this is not the right place for this, but Draftsight 2019 will no longer be free. It will cost an annual charge of 99€ or equivalent for the "basic" version. I understand Dassault (that Dassault!) are investing heavily in this product and adding capabilities so they'll want to recoup costs. A pity, as I like DS very much.
Miguel - 09/10/2019
Add a comment