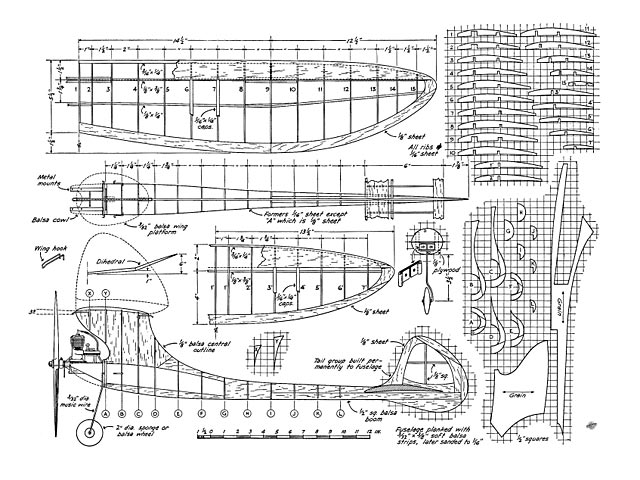 Quote: "THE Stormer is the second model of this general design. The original was built in 1942, weighed twenty ounces and had the same wing area as the later model. Powered by an Ohlsson 23, it had a rapid climb and was sensitive to the slightest updraft.

Using the same specifications, slight revisions in design were made - mainly a change in wing plan and a general reduction in drag. The Stormer incorporates these changes. Some of the principal factors which govern stability are the locations of the

these being relative to one another. Since adequate lateral, longitudinal and directional stability plus favorable spiraling characteristics were desired, the force arrangement was worked out in detail as one of the initial steps in the design of the model.

WING: The wing area is 324 square inches, average chord is six inches, span is fifty-four inches. And the aspect ratio is nine to one. This ratio has proved very efficient and is not so great as to cause structural problems.

The key to wing efficiency is the lift-drag ratio. Selection of wing section, aspect ratio, construction and angle of attack determine the relation of lift to drag. Obviously, the maximum lift is desired with drag held to a minimum. The Davis No.4 wing section was selected because it is similar to the reliable NACA 6409. Leading-edge sheeting and use of capstrips assure an efficient section throughout the wing.

Since the broadest part of the wing is toward the tip, and this area is higher than the center section because of the dihedral, the center of lift is quite high.

These efforts toward wing efficiency were worthwhile, for the model has a fast rate of climb, yet a safe climbing angle, a slow flat glide and great stability - even in gusty weather.

STABILIZER: The stabilizer area is 122 square inches, average chord is four and a half inches and aspect ratio is six to one. Use of a high-lift stabilizer section gives structural as well as aero-dynamic advantages. Pleasing elliptical curves mean more to a model than merely an improvement in appearance. So for appearance, efficiency and for strength, elliptical outlines are used on the wing and stabilizer.

FUSELAGE: The fuselage has a high thrust line, a high wing mount, and is approximately thirty-two inches long, depending on the engine used. To minimize drag and for adequate strength the general fuselage section is round. General fuselage lines..." 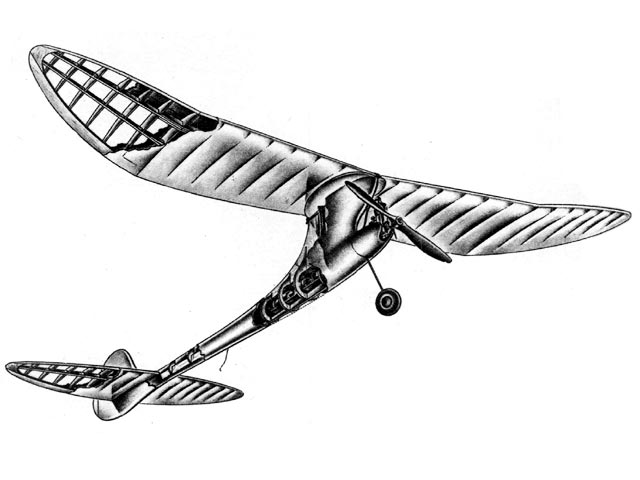