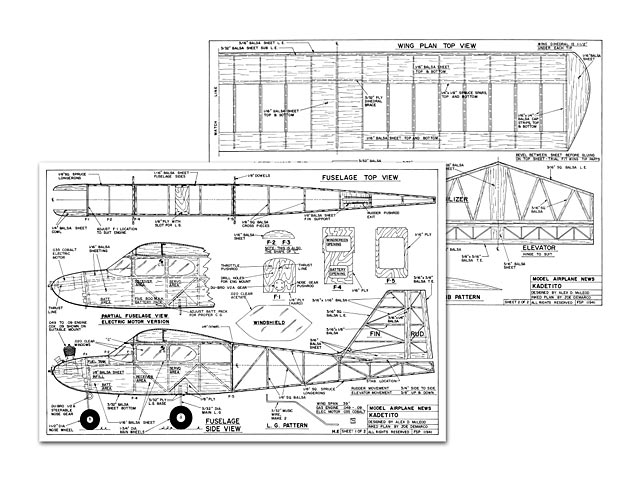 SIG's Senior Kadet and Seniorita are among the best-behaved trainers I've ever flown because of their slow speed and forgiving ways. Their lightness is one of the major factors contributing to this. Light models will withstand many horrendous landings with little or no damage, so it is well worth the effort to construct a built-up type of structure; besides, they look pretty with transparent or semi-transparent covering.

Here's a 1/2A-size, 39-inch-wingspan version of the famous Senior Kadet trainer that, if light enough, will fly well on a Golden Bee .049; if heavy enough, up to an .09. My model fell between and is powered by a G-Mark .061, which has a muffler and throttle. This gives it a better throttle response than most 1/2A engines that have only an exhaust sleeve. A Cox .074 Queen Bee would be an excellent choice, too.

Mike Gretz, and the other designers at Sig, thought it was cute and gave their blessing to this article. The original Senior Kadet and the Seniorita were hanging up in Sig's model workshop when I visited them with my 'Kadetito.' I was pleased with the similarities among all three.

SMALL DOESN'T ALWAYS MEAN 'DARTY': All too often, modelers have been heard to ';41 that little models fly too fast or 'dart around.' Some do, because they're relatively heavy and must fly fast to remain in the air. The Kadetito does not give the illusion of flying fast or being an angry little mosquito darting about. Its lightness and 2 square feet of wing area give it the same characteristics as its big brother and sister. It's 'plane' fun in a schoolyard and can be kept quite close when flying in confined spaces.

POWERPLANT VERSATILITY: I like flying electric models as well as glow-powered ones, so I provided for this when I built the Kadetito. Using a Du-Bro .05 electric motor mount, it can be converted quite quickly to a Cobalt .035 with five 450mAh SCR cells. The electric version weighs 6 ounces more. Naturally, the weight would increase even further if larger cells were used. Rudder, elevator and on/off switch activated by the throttle servo are quite sufficient for flying in downtown schoolyards. No one ever notices the electric-powered model, and it flies just great. Six ounces do make a slight difference though. The model could be built lighter than the 23-ounce glow version by using heat-shrink plastic coveting. lighter we not sheeting the wings. etc. I like the model so well that I'm planning a 48-inch version for a .10 to .15 engine.

CONSTRUCTION: The Kadetito is built out of balsa and a little plywood. The less sheet and ply used, the better the model will fly. if you wish to cut out some of the fuselage and wing sheeting and shave down the ply parts. I'm sure it would help. There is a compromise between strength and weight though, so it's up to you.

FUSELAGE: Some people like to start with the easiest part, such as the tail assembly, but I always start with the fuselage because it's the core of the model. Build the two fuselage sides over the plan out of 1/8-square hard balsa. I used spruce for the longerons; they're a little heavy, but strong. The 1/8-inch-thick balsa sheet used in the forward part of the fuselage sides need not be too hard..."

Quote: "Three years ago my 3 year old grandson asked me for an RC model: "With a small engine?" "Yes but small like this one showing a COX 049. I don't like the blue one as much." I started looking and this was Mateo's model [main model photo]. Saludos Mary y Steve"

Note this plan scan is, I think, originally from HPA, see https://www.hippocketaeronautics.com/hpa_plans/details.php?image_id=2974 and so should most likely be credited to danito69.

Note the original scan has some distortion (from paper slippage I guess) and shows a very, very bent fuselage plan view. I have tried to straighten this out, and it looks about right now, but I would still advise caution if building from this plan. Steve.

Update 08/05/2021: Replaced this plan with a clearer copy, thanks to EduardoJR, Pilgrim. This planfile is derived from the hlsat scan on AF, but here the fuselage views (both plan view and side elevation) have been aligned and straightened out. Accordingly the resulting plan is now stamped both as 'HE' and 'came to you though Oz'. 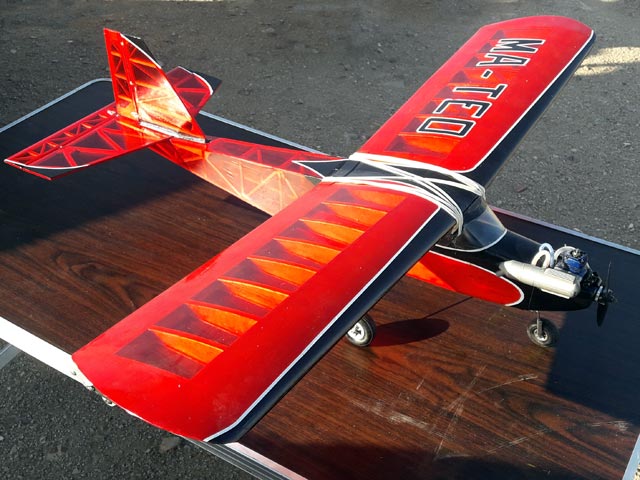