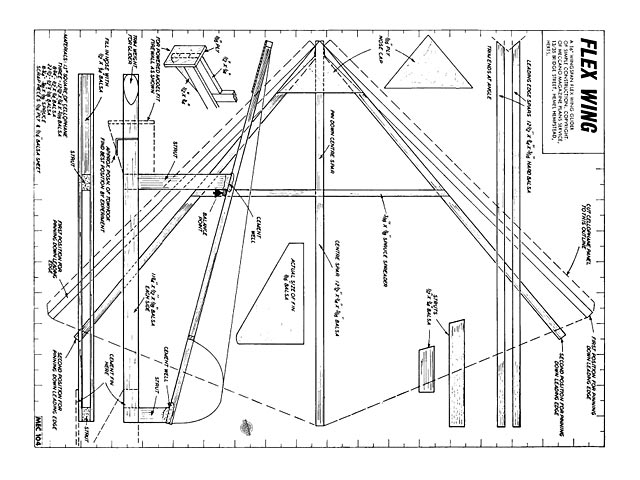 Quote: "Why not build a flexible wing kite. A simple balsa model with kite/glider action, based on the same principles used to land space capsules and rockets.

HERE'S A model with a difference which you can build as a glider, or a power model - or even fly like a kite. In fact, it looks more like a kite than anything else, yet it makes a very stable free-flight model. One other advantage, it takes very little materials or time to make the model. You will need to scale up the plan full size on a sheet of paper about 18 in x 15 in to build the wing properly (or you can obtain a full-size plan from Meccano Magazine Plans Service, 13-35 Bridge Street, Hemel Hempstead, Herts, price 2s 6d post free). The plan as reproduced here is exactly one-half size.

Construction: Start by cutting out a piece of cellophane sheet to the dashed line outline shown on the plan. You can use clear or coloured cellophane, the latter giving a more interesting looking model.

Now cut the two leading edge spars to length and trim off one end of each at the angle shown on the plan (50 deg). Also cut the centre spar exactly 12-1/2 in long. All three spars are cut from 1/4 x 3/16 hard balsa.

Lay the cut-out cellophane shape carefully in posi-tion over the plan and pin the two leading edge spars down over the first position as shown on the plan. Make sure that the cellophane is stretched out taut without wrinkles. Coat one face of the centre spar with cement, lay down in position on the cellophane and hold this in place with a few pins. Now cement the overlapping strip of cellophane in front of each leading edge and smooth round the leading edge so that it is stuck in place. All three spars are now stuck to the cellophane panel.

Leave the centre spar still pinned down, but remove the pins holding the two leading edges down. Move these leading edges to the second position shown on the plan and pin down again in this position. This will, of course, cause the cellophane to slacken and wrinkle, but ignore this.

Cut the nose cap froms 1/16 ply to the shape shown and cement in place. Cut and cement the 3/16 x 1/8 spruce spreader in position and leave the assembly to set. Do not remove from the plan until this assembly has set quite rigid.

Cut the two 11-1/4 x 1/2 x 1/8 balsa side pieces, also the two struts from 1/2 x 1/4 balsa. The side view drawing shows how these side pieces are cemented on each side of the struts, and the angled ends of the struts are cemented to the centr spare of the wing assembly. Cement another piece of 1/2 x 1/4 balsa between the sides in front of the first strut to produce a solid nose to the fuselage. This about completes the glider model, except for cutting the fin from sheet balsa and cementing to one side at the rear, as shown.

Trimming for flight: The model should balance level when supported at the balance point shown (ie on the spreader). Add plasticine or similar trimming weight to get the balance point right. Then try hand launching the model. The cellophane covering will billow out and fill as the model is released and the model should behave just like any other glider. If necessary, adjust the amount of trim weight to get the best possible glide.

Power conversion: To convert into a power model, cut off the fuselage nose short and cement a ply firewall to the front. Brace this with 1/2 x 1/4 balsa as shown in the detail sketch. The engine is then bolted directly to the firewall, but check first that the balance point will come out right. Shorten or lengthen the nose, as necessary, to compensate for the weight of the engine and still have the model bal-ancing on the spreader.

This size of flex wing is about right for an .ono engine. It is a little too small for safe flying with any-thing larger, so if you do want to use a bigger engine you should build a bigger flex wing. Build it in exactly the same way, but twice as big to suit an eaeo engine. You can use the same spar sizes, but this time use spruce instead of balsa. You can also beef up the fuselage sides if necessary, eg use 1/2 x 1/4 in balsa instead of 1/2 x 1/8.

Thin polythene sheet rather than cellophane will be better on larger models. This cannot be cemented, so you will have to use a slightly different technique for sticking the polythene panel to the spars. Lay the spars down first this time with the polythene panel on top and then pin down to the plan. Using a soldering iron, rub along the line of the spars to 'weld' the polythene to the balsa. This is quite easy to do, but do not use too much heat or you will melt the polythene. Then turn the wing over and complete welding the polythene overlap around the leading edges. Finally, pin down in the second position for cementing the nose cap and spreader in place." 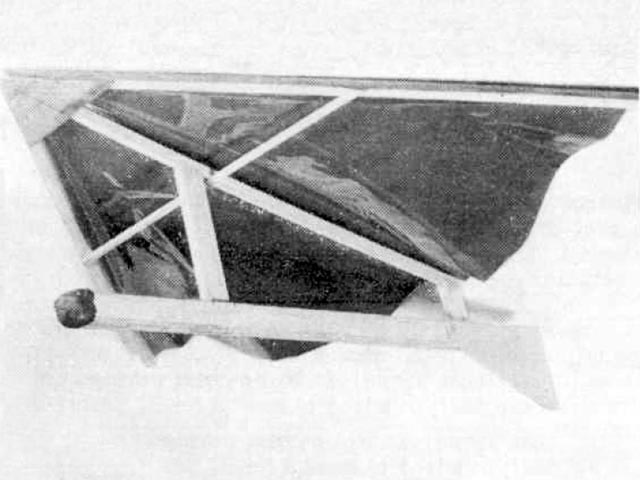