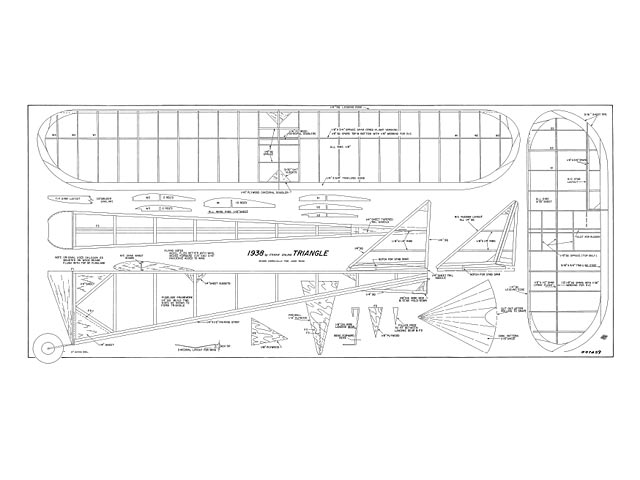 Later featured in a nostalgia article in Dec 1978 MB:

Here's an Old Timer that probably even John Pond doesn't know about. It's Frank Ehling's Triangle, designed and built in 1938. Actually, the first Triangle was twice the size of the model presented here. When Ehling's club decided to hold a marathon contest at Cherry Hill, NJ, he built a half-size version (the model presented here) and powered it with an Ohlsson .23. The idea was to put in as many one-minute flights as possible in one hour. All flights were ROG, and if you broke a prop, you were out (that's why the wheel is out in front of the prop). The model turned out to be a good, stable flier so much so that Ehling won, the contest!

The plans for the Triangle were sent to us by Bernard Shulman, who got them directly from Frank Ehling himself. Bernard has been flying a Triangle with a Cox Tee Dee .049 and Ace single-channel pulse radio, and has been having a ball with it. For those who may want to do the same thing, we've included a sketch of the modified rudder on the drawing.

Bernard says the model flies better with the wing moved a 1/2 inch forward of the position shown, and with 3/16 inch of incidence under the LE of the wing. He also used spruce for the wing LE and spar (the original used balsa). Bernard says the Triangle is so odd-looking, his wife thinks it's cute. Well, it's odd-looking, all right nobody will disagree with that - but cute?" 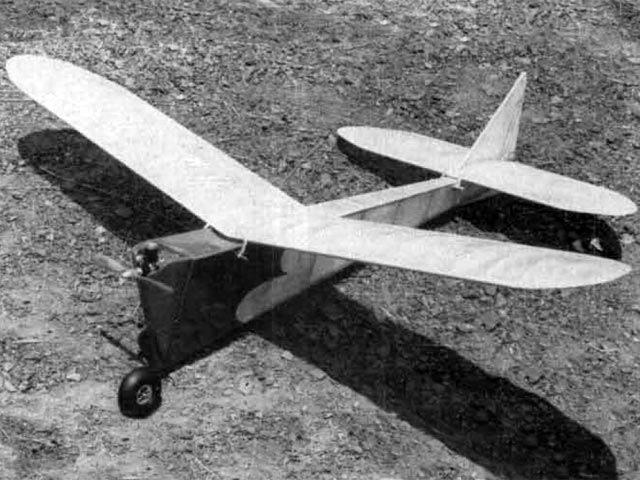