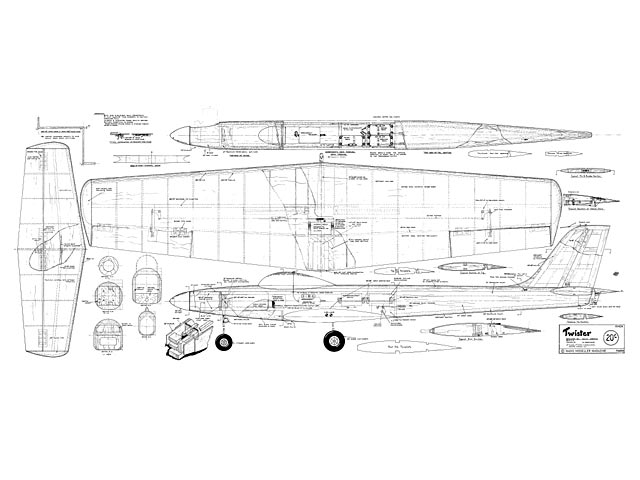 THE Twister is not a beginner's airplane, being designed specifically for the Corsican do. It all started about a year and a half ago, when the infamous Santana wind came whistling over the San Gabriel mountains from the California Desert and, with gusts up to 35 mph, blew out a pylon contest at the famous Sepulveda Basin. The only soul nervy enough to fly at all was Cliff Weirick, so he did, and said to me, as his Midget Mustang went screaming into the air: Watch how this little Toad does the FAI. Schedule! He then proceeded to make my jaw reach for my shoes as he wrung the little jewel out.

The gusty wind just had no effect on the size or shape of the manoeuvres. There was no characteristic screeching stop on the back-side of the Cuban Eight, loops and bunts were clean and round and bigger than a child's eyes on Christmas Morn. The double stall goodie really was, and the inverted eight was clean as a bean. So I says to meself, dumb-founded: Why aren't we all flying pylon racers at stunt contests? Oops, sorry, I mean Rallies.

Cliff then proceeded to attempt a landing and I soon found out why it's not a stunt machine. The thing landed with all the finesse and grace of a well streamlined dust bin. First of all, it wouldn't come down, and when it finally did, it looked like somebody had
yanked the air out from underneath it. Of course, when it finally found the ground, it did the usual bounce ballet, complete with pirouette.

There is no real moral to that story. I just told it because I like to tell tales on Cliff. Really though, it did seem to me, at the time, that a pylon racer made a keen stunt ship for every manoeuvre but the landing. With that thought in mind - I've been told that l've lost mine somewhere,- especially by people, who have built Thunderstormers (oz9052) - I fled home, grabbed a pencil, and Twister was born on the back of a used envelope.

I shall now attempt to elucidate, (whatever that means), on the design philosophies (accidental?) of Twister. The trend to larger models had begun. It is my nature (second) to attempt to reverse all trends, hence a smaller model. This started way back when everybody was flying low-wingers. I flew shoulder-wingers like the Stormer (oz5794). Then, as radios became smaller, small models became the 'in' thing; I went bigger (Thunderstormer).

Enough of this pallaver! It seemed that the thing to do would be to compromise the size and wing loading, which seemed to be what made the pylon racer what it was, to achieve better landing characteristics. Now, the Thunderstormer was a bit of a floater in landing due to its light wing loading, but in climbing manoeuvres (like the Top Hat), it severely taxed the most brutish 60's. Therefore, obviously, an improvement would consist of higher wing loading and lower weight. So, it seems, the answer would be a smaller model. Quite right chaps! But a pylon racer carried the answer too far, so I backed up a bit, split the difference, and forgot the rest. The result of all this was the Twister.

I decided, also, to go to a tapered wing, to see if that was the answer to the 'tail wagging' problem. It was. Also, knowing full well the possible consequences of the tapered wing (severe wing dropping tendencies near stall speed). I gave Twister a progressive (12% root, 15% tip) airfoil. This guarantees that the tips will not stall first. The heavier wing loading eliminates the landing 'float', and thicker tips make 'tail down' landings pure pleasure.

The overall weight came to 62lb (pre-devaluation), which was 15 shillings lighter than the ole TS'er. Even the most casual observer will twig what that did for the Top Hat. I also gave Twister a 35% (of wing area) stab (horizontal tail-plane, troops). This was purely accidental. I have, since then, learned how to use a slide rule correctly. But, fear not lads, it's all good.

Let me say a few carelessly chosen words about our old buddy, 'center of drag.' What it amounts to is this. The farther back the center of drag, the better the damping is. The 'Kwik-Fli dance', ergo, yaw oscillations in gusty (English) weather, is caused by the center of drag being too far forward. How does one displace it rearward? I dunno! At least I didn't until I flew Twister. By applying a dose of 'Aerodynamic Holmesman-ship' (Sherlock, that is) I twigged that the thinner (12%) tapered wing had less drag, and the larger, thicker, (15%) tailplane had more drag. hence the "C of D" had been displaced rearward. Viola! The Twister in flight has been compared to an ancient weapon system (bow & arrow).

The spin-off benefit of the larger tailplane, again appears during landing. It seems that when things quit flying, one of the last things to quit should be the tail. The 'Stall Rollcall' should read some-thing like this:

Any deviation in this sequence results in scraped wing tips and bent nose-wheel struts. So, theoretically, we have satisfied the con-ditions, and the result should be a better flying model, (and a better looking one too!).

Of course, when theory doesn't agree with practice - to hell with theory. But, happily, in this case it does. The overall flight characteristics are closer to the ideal than ever before. The ship is (very) fast, therefore penetrating wind better. It will also fly slow and is safe at or near stall, for those nice tail-down landings FAI judges like to see. It won't soar over the spot, but it will soar up the front side of a Top Hat like a bear up a tree after honey. Giant loops and eights are a cinch, and its speed carries it through them in about the same time it takes the ordinary model to do small ones. The tapered wing makes it easier to spin and the large tailplane minimizes yaw glitching. What more could the contest flyer ask for? A little more skill perhaps?

I will not delve at length into the construction of Twister because I'm getting writer's cramp, but I would like to point out a few important things that I found out about too late to change the first plans sold. The thrust line, mean chord line of the wing, and the MCL of the stab should be parallel (0° incidence). The plan apparently had some slight amount of positive incidence in the wing.

The ailerons, as shown are too sensitive. The way to correct this is to use the wheel output of the servo and link to the inside hole. There is a good reason for this. The rack ouput, although more convenient, will have more slop, because it goes through an additional gear mesh. This mesh is notoriously sloppy on an Orbit Servo, hence I only use the rack output for nose-wheel steering and throttle control. Obviously, this slop shows up as an uncertain neutral and will cause no end of grief during looping manoeuvres. An additional reduction may be obtained by linking to the inside hole on the aileron bellcrank, between the crank and the ailerons. This should reduce the travel sufficiently so that full aileron stick will be just right for the 3 con-secutive rolls.

Next, the rear spar location doesn't agree between wing plan and rib drawing. That's about it for errata's sake. Actually anybody brainy enough to attempt to build this thing, will modify it to suit their own erratic personalities anyway, but I thought I better mention the errata 'in case'. Nuff said? (Note: suitable notes appear on the latest copies of the plan - Eds).

The wing and stab are supposed to be built 'downside up', on a perfectly flat surface. Since both the wing and stab vary in thick-ness, and this will result in a slight amount of dihedral in both. Don't worry about this. You will not get into the least trouble because of it - unless, of course, you attempt to fly the beast - but then you are on your own!

In summary, let me say this: Twister is not recommended for the Novice. It was designed to go like stink and scare hell out of Judges. It will not fly worth a damn on its side, but does astonishingly well on its top or bottom. But then, to do good knife-edge flight, the thing would have to look like a fish (sorry Fritz). Good job knife-edge isn't in the schedule. The original Twister went 'down that great waste chute in the sky' during the fun fly at Corsica, (beware of Corsican wine). I thought so much of the ship that I decided the next copy would be identical to the original. This is the very first time I've done this. Cheers, troops!"

Quote: "Please find attached a copy of my Twister Plan from from 1968 along with the article from the Magazine. I could not find it in your library so thought you may like to include it. Kind Regards, John" 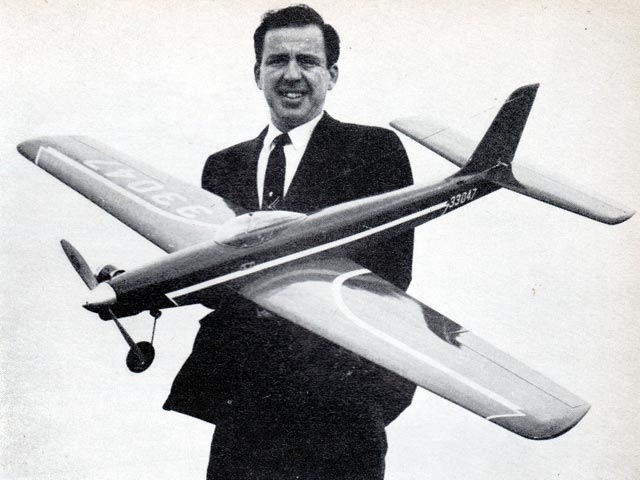 This is one of Doug's models I had never seen, pretty small for a honkin' Webra 61, must have been a blast to fly. Doug's claim to fame though, is as the inventor of the R/C servo, the exact same configuration we still use today over 50 years later. You could take one of his original servos and plug it into a modern receiver and it would work, centering perfectly. Doug never patented his revolutionary design and every other manufacturer copied his circuit.
Doug Smith - 06/09/2019
Add a comment