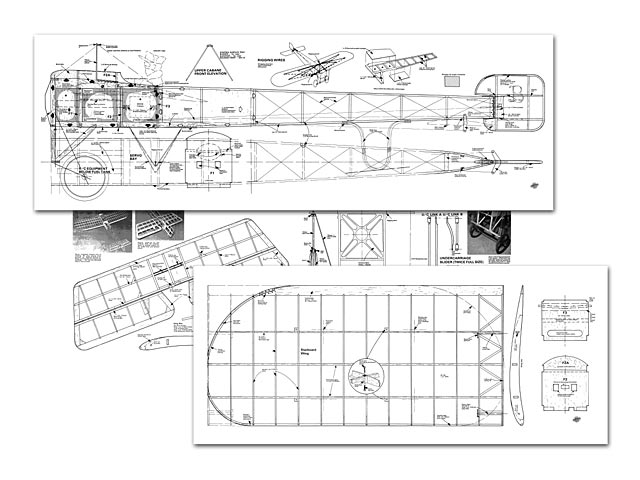 Quote: "Classic model from the pioneer days of aviation. For 2 or 3 function R/C systems and .15 - 19 motors. Bleriot XI, by David Boddington.

WHEN designing and building model aeroplanes is your business, as well as your pleasure, it is possible to become stale and loose your desire to build models in your spare time. Occasionally, very occasionally, this happens to me as it did a few months ago. The malaise did not last too long and what brought me out of this unnatural state was the designing of a series of vintage scale models. Shortly to be screened was the TV Series 'Flambards' and we had so much pleasure building and flying these models that I decided to draw them up in miniature form, for 2 or 3 function radio and .15 and .20 engines.

Presented here is the Bleriot XI, but I have also built the Blackburn 1912 Monoplane (oz7659) and the 2 seat Blackburn Mercury type monoplane. Having also designed 1/4 scale versions of the Bleriot and Blackburn 1912 you will realise how much I am 'hooked' on them. I must confess that before the Flambards contest came along I hadn't contemplated building this type of model, the 1914-18 war period was more my scene. Now I know what I have been missing. The models offer great rewards for the model builder and they are charming to fly with a real vintage aerial flavour.

One word of warning, if you are genuinely a 'put it together tonight and fly it tomorrow' modeller then I suggest you pass this one up and have a look at the foam/glassfibre adverts. On the other hand, I know from the response to WWI free plan issues that many of you do enjoy a building challenge so this one's for you. As a matter of interest I started building my Bleriot in my spare time on a Saturday morning and it was completed, apart from covering and radio, by the Sunday of the following weekend. When I say spare time I do mean dedicated spare time and the family didn't see too much of me during this period. However, as the construction period included building the wheels and undercarriage from scratch it does prove that it is not so time consuming if you get stuck into it.

To ease the modellers load, and to supply some of the more difficult to obtain items, I am offering an accessory pack for those of you, who prefer not to go it completely alone,

The Bieriot type XI first flew in January 1909 and was, of course, famous for becoming the first powered aircraft to fly the channel in July of that year. It was probably the most successful aeroplane of its era and was produced in large numbers and there were many versions of the type XI. The version presented here is not the earliest one but represents a model used by a number of countries both for civilian and military purposes. In addition to the single seat BieriGn Xl's there were also two and three seat versions and some using a parasol wing.

Construction: Before talking about the actual building, a word about materials, The open structure of the fuselage is strong enough, providing you are careful with the selection of materials. There is 1/8 in sq spruce and 1/8 in sq spruce. Pick the wood that is slightly oversize rather than under, and do select straight grain material of approximately equal pliability. You will note that beech is specified for the undercarriage upright and horizontal members. I know that this size is notreadily available at the model shops (it is provided in the accessory pack) but your local timber merchant will probably cut some for you if you speak nicely to him. Spruce can be used in lieu of beech but it is not quite as strong - nor does it have the character of beech. Wing ribs - there are a lot of them - should be from medium stock with the hardest examples retained for the root ribs. On the prototype model I made the mistake of using nylon monofilament line for the fuselage bracing and although this is a nice material to work with it is too flexible.The bracing does add a lot to the rigidity of the fuselage and I would suggest using strong black thread (ie Blakes Button thread) and not the ordinary sewing thread. Laystrate wire or fishing trace line is too stiff to bend on a model of this size.

The position of former F2 can be adjusted to suit the spacing of the servo bearers, there is ample room for three servos to be fitted side by side. Between former F1 and F2, and below the fuel tank, is situated the receiver and battery (250 MAh size) and, again, there should be sufficient room for most modern receivers. If you are a bit cramped for space I would suggest lining this compartment with thin foam rubber instead of trying to wrap the individual items.

On the prototype I used a PAW 19 diesel engine - now available with R/C throttle - as diesels have the ability to swing large props (11 x 4 in) at moderate revs. This both looks right and sounds right. A glomotor would work equally well but check off the spacing of the bearers and the carburettor position. It will be necessary to use a small dumpy silencer with a glo-motor but a moderate reduction of power will not be of any significance.

No additional nose weight was needed on the original, despite the small nose moment, but if this situation occurs with your model it is possible to move the batteries forward to a position under the engine. Naturally, they will require protecting from oil and fuel by wrapping them well in polythene bags. 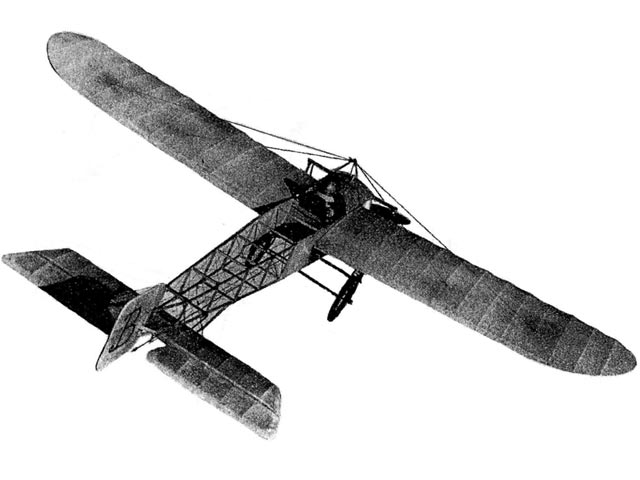