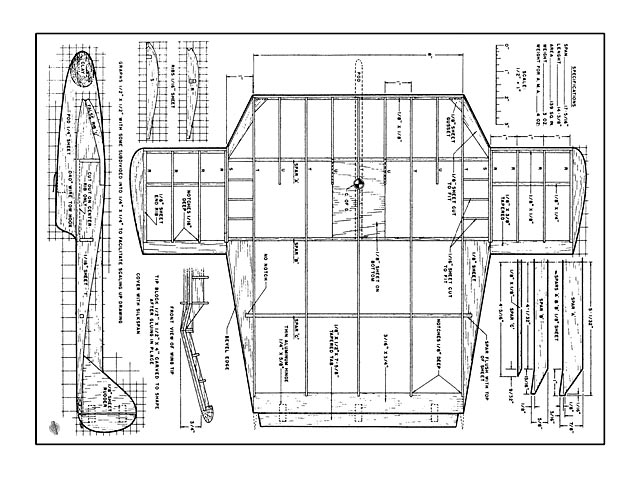 IN AN English model airplane magazine I came across a design of an unusual tailless towline glider. After studying it, I decided that because the plan form was almost round, it would be rather hard to construct, so to facilitate building it I designed my ship on rather straight, rakish lines. This is not a copy of the foreign model, as that ship had a nearly round plan form and had no outer wing panels.

These panels are used to give lateral stability in the same manner as a regular dihedraled wing, whereas the English job was dihedraled in the center only and rather messed up the lines of an otherwise neat ship.

After initial testing, it was found that more rudder area was required. The model responds to rudder adjustment readily, and is very stable while gliding. The tab in the rear was set in a neutral position and clay was added until a long, flat glide was obtained. It has not been moved since.

When adjusting the ship the operator is advised to leave the tab iii a neutral position and only add clay for adjustments, as this air foil seems to be very stable. Towing the ship is a pleasure, as it rises almost straight up, leveling out at the top of the line and sliding off the hook with great ease.

Building the ship is easy as pie, and will cost less than a dollar. Scale up the plan and soap in the usual manner. Pin punch ribs T, U, and R onto stiff 1/16 sheet balsa and use them as templates to cut out the others as required. (Note there are only two S ribs.) Cut out the spars from hard sheet balsa along with the triangular-shaped side panels. The trailing edge of the center panel is cut from 3/16 sheet, 34 in wide and 8-1/6 in long, notched and pinned in place on the plan (do not shape bottom until wing is finished.) Slide the ribs T onto the spars and line up with the plan, then pin in place and glue. Add the leading edge (1/16 x 1/8), ribs S and U. Glue in place the corner leading edge pieces, gussets, and triangular side pieces.

The outer panels can be made in the same manner while the center is drying. When the inner panel is dry, remove from the plan and add the stiffening pieces be-tween the outer ribs T and S, as well as the 1/16 sheet on the bottom that forms a guard against your fingers when holding the model for launching. Remove the outer panels and glue the tip blocks in place. Round off the leading edge on the center panel and generally clean up the frame-work to help in obtaining a smooth cover-ing. (Do the same to the outer panels when the tips are carved.)

Cut the rudders from 1/16 sheet and the tail trim tab from the same. Carve the pod from 1/4 in sheet and apply several coats of wood filler, sanding between each coat to get a really smooth finish and a good base for paint. Cover the rudders and trim tab with Silkspan, and then cut the rudders apart and use thin aluminum for hinges. (Use the same method when attaching the trim tab.)

After gluing the outer panels in place with the proper dihedral, you may proceed. to cover the wings with Silkspan. When done, water dope the paper and leave dry. The rudders and pod on the original were painted blue, while the wing was covered with red Silkspan. After the wing has dried, apply two or three coats of clear dope. When finished, glue the rudders in place, along with the pod and trib tab. Add a tow hook of .040 wire, and you're all set to take her out and test her.

When flying the ship, leave the rudder tabs and the main trim tab neutral. Add clay until a long, smooth glide is obtained. Now tow the model up, on about a 40-foot line, and determine which way it naturally wants to turn. When adjusting the turn, try to make it as tight as possible without spinning the model into the ground." 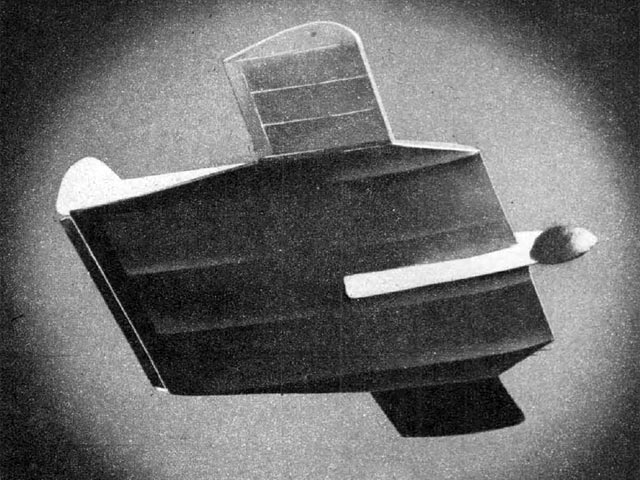 This is a propos as quadrangular tableware is in fashion these days . This may be the first time I see winglets employed, eat your heart out Burt Rutan :-)
Miguel Morao - 04/09/2019
Add a comment