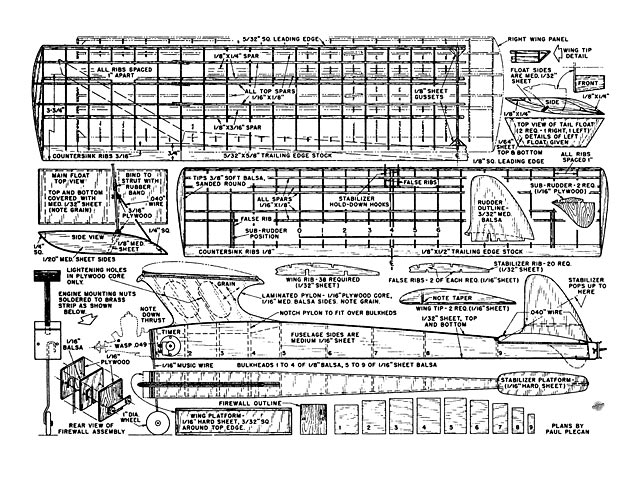 Past Due. Free flight power floatplane model, for Wasp .049 engine.

Quote: "This proven contest winner can fly off-the-ground or as a rise-off-water job Past Due is a high-performance A/2 contest type free flight model, capable of a fast climb under power and a very flat glide. It was designed for easy construc-tion, durability, lightness and dependability. The multi-spar wing and stabilizer have stood the rough conditions of contest work and proved themselves warp-free. The model in the picture has been shipped to both coasts and to Texas via railroad, automobile and airlines without a trace of warps in either the wing or stabilizer.

This ship is equally at home on land or sea, having been flown in both the ROG and ROW events at two National Contests. Last year at Los Alamitos it weighed in at 5 oz on the nose with floats and turned in a time of 13 minutes plus on three flights ROW.

The balsa used throughout is medium firm unless otherwise noted on the plans. Start by cutting out the two fuselage sides and the bulkheads from 1/16 medium sheet.

Mark off the bulkhead stations on the sides before cementing in place. Note: be sure to keep the fuselage sides square. Cut out the plywood core (1/16 ply) for the pylon including the lightening holes, then laminate both pylon sides with 1/16 sheet balsa (note grain). After cementing, lay a weight of some sort on the pylon while it's drying. When dry, notch pylon to fit over bulkheads - at this point be sure to keep the same wing incidence as is on the plans - and cement in place using plenty of cement.

Sheet the top and bottom of the fuselage with 1/32 sheet balsa (note grain). leaving a small section open on the bottom and to the front of the fuselage until fire-wall is cemented in place. Cut out wing and stabilizer platforms and cement in place. Use plenty of cement to form a fillet. Use 3/32 square for edging of the wing platform. Cut three pieces of 1/16 plywood to size for the firewall, bend the landing gear wire (1/16), and cut out middle piece of plywood to fit gear; now sandwich together using cement liberally, and clamp in vise until dry. Cement firewall assembly to fuselage; when dry, drill holes for your particular motor including the brass strip on which the nuts are to be soldered. Solder nuts to strip and cement into fuselage (on back of #1 bulkhead).

Cover the section that was left open on bottom of fuselage. Cut out the hole for the timer. Cement a piece of gauze around firewall to sides of fuselage. Sand entire fuselage with fine sandpaper and cover with Jap tissue for strength. Give the fuselage a coat or two of sanding sealer, sanding between coats, and finish off with one or two coats of fuel-proof dope (colored or clear). Mount timer and dethermalizer hooks, engine, solder on wheel - and the fuselage is completed.

The stabilizer is constructed by pinning down the notched trailing edge stock and the two lower spars. Cement the ribs and false ribs in place and then add the 1/8 square leading edge and top spars. Remove when dry and add the tips (sand round). Sand the entire stabilizer lightly and cover with Jap tissue or rubber-weight Sky Sail. Shrink with water and when dry give two coats of clear dope. Cut out rudder, sand to shape and cover with tissue, give two coats of dope and then cement into place between the two center ribs of the stabilizer. Add the 1/16 plywood sub rudders and fuel-proof the entire tail section.

If the wing is to be constructed in full at one time, make a rough drawing of the right wing panel to join the left. Con-struction is the same as the stabilizer with the exception of the tips (see detail), and the top spars which are added after the dihedral has been cemented into wing. At the polyhedral breaks the top spars are crossed and cemented for strength. The entire wing should be sanded lightly before covering with tissue. After cover-ing, shrink with water and follow the same procedure as with the stabilizer.

When assembling the completed model be sure to key the wing and stabilizer to the fuselage with a split dowel.

The finished model should balance one and one-eighth inches in from the trailing edge. Hand glide over high grass; make sure that the glide is slow, almost to the stalling point. Tilt the stabilizer to give a left circle in the glide. Power flights should be started with motor runs of five to seven seconds. The power circles are to the right in wide circles. This model climbs on its wing and not on the propeller, and should consistently turn in flights of over two minutes in calm air.

With this model as well as with any other presented in AT, the Editors would like to hear of your flight performances. Write 'em!" 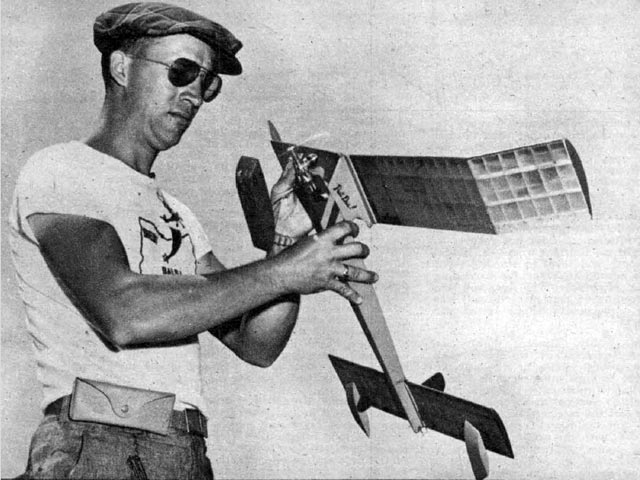