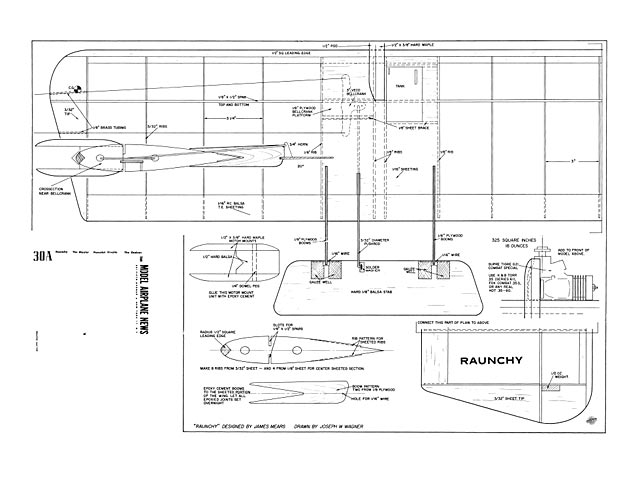 Quote: "Combat today is the main interest in this section of the country and the heartbeat of the Texans MAC, therefore a combat ship has to be something extraordinary to merit building. Not especially to look different but to have simple, light construction with tremendous strength combined. Many ships shed their outboard wings in our 30 to 40 mph winds.

Many hours of thought and planning went into the construction of Raunchy and finally, on a very windy day in March 1962, the plane was launched and tested in every way. The ship was everything, and more that I had hoped for. Eager to fly, fast as lightning and smooth as silk. Responding perfectly to every movement of the handle, Raunchy created as much excitement for me as the first time I tried to loop.

The 1/8 x 1/2 spars kept the outboard wing intact through the sharpest maneuvers while the 16% stunt type airfoil eliminated yawing and slowing down in tight turns. The 33 sq inch stab helped stability, yet very little movement (20°) was required for snappy turns. With this small amount of movement the stab seemed to act as a deflector rather than a brake. All in all the test flight of Raunchy was very successful and my pride in the ship was evident to everyone near.

Being unable to attend the '62 Nats, planes were given to Sherwood Buckstaff and Bentley Page Jr who were making the long trip to the Chicago Nats. Buckstaff took second place in Sr with the Raunchy, but due to fuel problems, Bentley lost out in the finals. In AAA meets, it has won or placed in: Dallas South-westerns, Tulas AAA Sr., Lubbock AAA which were the only AAA meets within 300 miles of Lubbock in '62.

Modelers at the Southwestern meet in Dallas were very impressed with the plane's performance and requests for plans were received from top combat flyers from Los Angeles, New Mexico, Okla. and Texas.

To the best of my knowledge, this model has placed in every contest within a reasonable distance of Lubbock since it was designed, and has earned a reputation any ship can be proud of.

Pin trailing edge and spar to your building board as most of the construction will be finished before you take it up. After the glue has set, place top of trailing edge in place using a generous amount of glue where the trailing edges meet. Notch bottom and top spar to accept tank or pen bladder compartment. If tank is used about 1/4 in will be left on each spar. Install tank and slide top spar in place. Now pin your leading edge in place (note on plans that the leading edge is rounded to form a better airfoil). The strength of the wing is in the spars, so don't be afraid to use light wood and sand it down.

Wing tips can now be glued in place, and leading edge cut off to match tips. Cut the ends of the top spar at proper angles to form tip braces. Put 1/2 in plywood bellcrank platform in, and weight can be added if desired. I use 1/4 oz when running pen bladder and none with tanks.

Now remove the wing from the building board and cut the bottom spar for tip braces. If your building board was true, the wing should not have any twist. Cut a piece of 1/2 in balsa for your motor mount and glue maple strips as indicated on plans using the 1/4 in dowel for extra protection. Pull the motor mount in place using a generous amount of cement. Install bellcrank, pushrod and leadouts, sewing and gluing leadout guides to tip..." 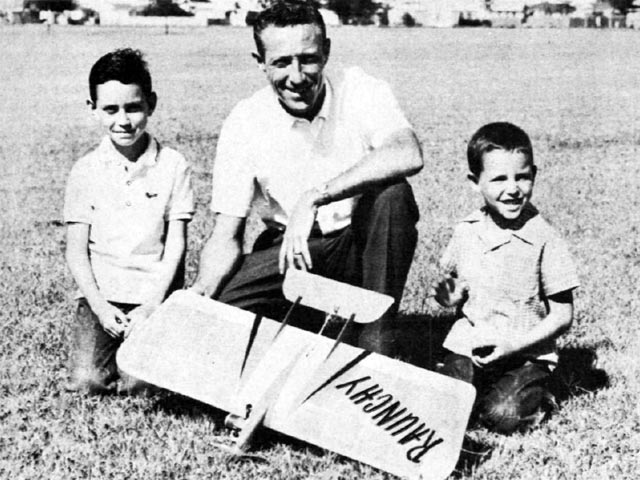