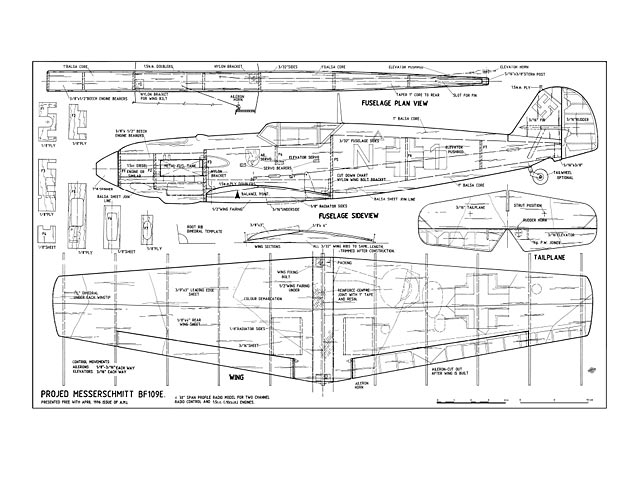 Quote: "Airborne fighting on two channels and an ounce or two of fuel. Projed Me109, by David Boddington.

Jedelsky wings, utilising a relatively thick leading edge sheet and thinner rear surface shaped to an aerofoil, are remarkably efficient - more so than one might expect. I have used them for sports models, free flight and radio, for the past thirty years and am constantly surprised by how well they perform, they have been used for a longer period in competition glider models.

Combine the Jedelsky principle with a profile fuselage and you have the Projed series semi-scale designs intended for simple R/C equipment (and some free flight models in the pipeline). To date we have Projed Spitfires, Mustangs, Grumman Tigercat (twin) and the Me 109 presented here, built and successfully flown. The choice of prototypes to model is almost limitless.

If you are contemplating building one of your own designs, there are a few points to bear in mind. One of the advantages of the Jedelsky wing is that it uses common wing ribs, which are trimmed after the wing panel is built. With a wing planform having a greater taper on the trailing edge than present on the leading edge this automatically builds in desirable wash-out on the wings. The reverse would be true for an aeroplane such as the North American AT6 Harvard where the taper (planform) is on the leading edge. Fortunately most designs (Mustang, FW 190, Spitfire etc) have more taper on the trailing edge.

To make the radio equipment linkages simpler I tried a 'Spitfire' using rudder control in place of ailerons, it wasn't controllable. It would be possible to fly a model with rudder/elevator control, including the Me109, but you would have to increase the wing dihedral (about double) and the aileron linkage is not such a hassle.

It is possible to use standard size servos but it will be much easier to fit mini-size servos (it is not necessary to go to micro types).

Small receivers are also needed for these designs, again they do not have to be the micro versions but why not try the inexpensive Hitec two channel micro receiver on 27MHz - assuming that your flying site is suitable for this common use frequency. Small battery sizes present no problems these days, there is a wide selection of capacities and shapes, try Overlander, 134 Duncan Road, Aylestone, Leics. LE2 8ED (0116 2836649 Fax 2440215).

Do take the trouble to plan the installation of your radio and linkages before commencing construction. You will probably find it easier to build the battery into the fuselage - also to use a charging socket/Isolating switch arrangement in place of a standard slide switch. It would be possible to lighten the structure by using thinner grades of wood and prudent sanding. This together with micro radio could allow you to use smaller engines and, possibly indoor flying. Jeff Barringer is following this route, watch the 'IT BIT' file for details.

Away we go: One of the obvious advantages of this style of model is that it can be built and finished in short order. I actually started, from scratch, one model on the Friday morning and was flying it late
afternoon on the following day (thanks to De Luxe Materials fast setting adhesives, Modelite filler and Holts cellulose primer and gloss colour). However, this is not a recommended action - it can lead to misunderstandings in the family - it is more important to concentrate on good wood selection, keeping the rear end light, and making a warp free, true model.

Let's start with the wings, as this may be the first time you have built a pair of wings using the Jedelsky method of construction. Cut out the ribs (all the same size and pattern) and the 1/8 sheet rear wing sheeting. From a 3/8 x 3 inch sheet of balsa, shape the leading edge section as shown in the photographs. Sand the underside of the rear sheet, thoroughly as it is virtually impossible to sand when the wing is completed.

Cut the leading edge sheet to the plan outline and then use the razor saw and sanding blocks to reshape the tip leading edge curvature to a reasonable aerofoil.

When both panels are constructed and removed from the building board they can be sanded smooth on top before cutting away, with a razor plane, the underside of the outer ribs and trimming the ribs so that they do not extend beyond the leading and trailing edges. Do not trim away all the rib undersides otherwise it will weaken the wing. Trim the outer ribs to match the depth ratio of the root rib.

Holes for the wing fixing bolts, sleeving and a small rear fairing (for the rear engine bolt fixing) completes the main wing framework. Cut out the ailerons, gluing the additional aileron ribs in position first and round off the leading edge. What form of hinge you use is up to you, I opted for 'old fashioned' sewn hinges.

Slim fuselage: You must sketch in the installation of the RC equipment and linkages, also the engine (which will determine the bearer spacing) and the fuel tank. Many of the control line fuel tanks can be adapted for the Projed models, but remember that, if fitted horizontally, you may well not get a full tank run.

Cut the fuselage sides and one inch balsa core, mark the position of the core, formers, bearers and doublers on the port side and glue these items to the side.

Fit the elevator pushrod and Mead battery pack before gluing the second side in position, the supports for the servos should also be fitted to the sides before joining. Remember to screw the rear wing fixing bracket to former F4 and the 3/8in.sq. beech block and anchor nut to F3.

Round off the top and underside edges and cut away for the fuel tank, the engine and the holes for the pushrods and switches. Tail surfaces are from 3/16 sheet balsa, taper the trailing edges and round off the leading edge. Because of its wing structure underside, film or 'tex' covering is inappropriate. You could use coloured felt pens for a simple colour finish or follow the conventional system of lightweight filler, a primer/filler and spray or brush colour application. Try not to let the weight build up too much at this stage, a cellulose finish is fuel proof for diesel fuel but not for glo-motors.

Hand launch only: Before hurling your fighter into the wide blue yonder, carefully check the balance point. Your model should weigh up to 1-1/2 lbs (680gms) and the suggested control surface movements are shown in the premium plan drawing. Carry out all the safety checks, get someone to give you a smooth hand launch and you will be surprised how 'non-twitchy' the model is to fly.

Treat it as you would any low-wing sports model, it has a reasonable acrobatic repertoire and looks quite scale in flight. The stall is gentle, the engine off performance more than adequate, just keep it a little closer in than you would with a larger model. You could go to a 12 or 15 (0.15 cu in - 2.5cc) engine, but certainly no more than this, most modellers will find a 10 (1.5 cc) engine perfectly adequate.

Watch out for the Tigercat drawings in a future issue of AMI - probably in the autumn."

Quote: "Hi Mary and Steve... I have attached a scan of a plan that I hope is of interest and that I'd thought I had lost, but found an old copy of it the other day. I have no magazine article to back it up, and it was rather a long while ago that I got the magazine and plan, but I think it is possibly a David Boddington design [edit: confirmed]. As it says on the plan, it was from AMI 1996, so maybe an historian can cast some light on the heritage. The original plan also included rudders from another AMI design, but I erased them to simplify. Thanks again for your website. Best regards," 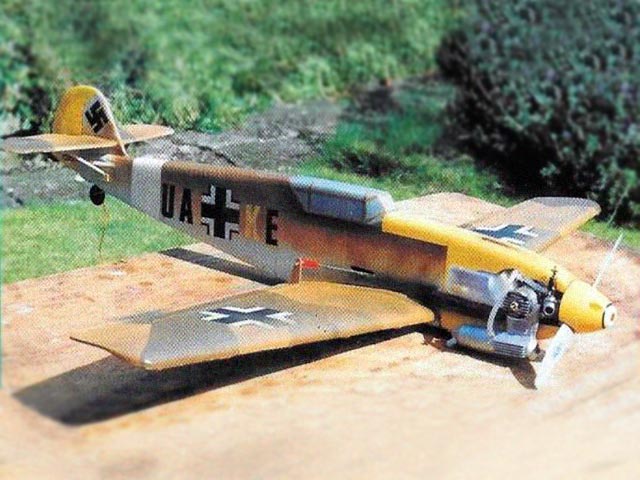