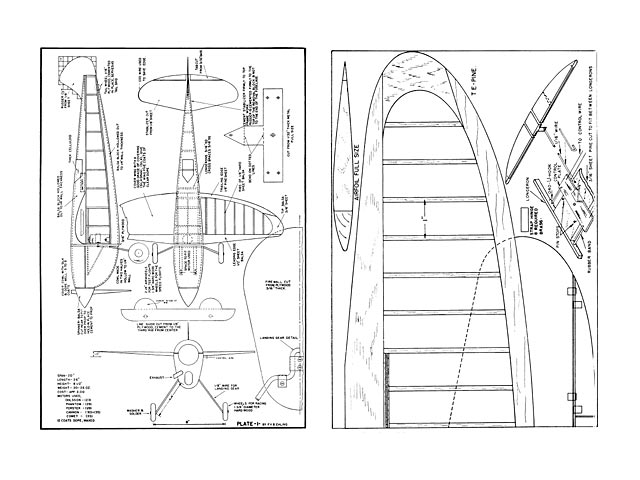 Quote: "A fast, snappy U-Control model that provides all the thrills of piloting a full scale racing plane. Spee-Dee, by Frank Ehling.

THERE are all types of models that one can build, yet there are few that look like a real airplane and still turn in good performance. This model on the wing looks as realistic as one could expect to see. All this is only obtained with the aid of U-control tethered flying, for most of these "little bullets' would really crack up when landing, since they are so fast.

In designing this little ship scale effect has not been lost nor has flying ability, yet it is an easy ship to build and fly. With a simple framework and a few balsa blocks to streamline it, a good strong ship will result. These little racers, unless handled carefully, do not come in to land like an indoor glider but more like a streamlined brick; that is why they have to be built as strong as possible.

The wide range of motors that can be used in this ship will make it a hit with model builders. If your motor does not fit the cowl all that need be done is cut the bottomt off the cowl and let the motor extend out the bottom, for the extra power you will get in return will offset the drag of the motor.

It must be remembered that streamlining takes effect above forty miles per hour and with this in mind a good smooth finish will add speed to your ship, it will also preserve the ship from oil and gas that will rot the balsa. This is one reason that these ships most generally boast a slick paint job.

To start with, the plans of the wing and stabilizer are drawn full size so you will have little trouble. The fuselage will have to be enlarged: this can be done with a pair of dividers. All that you need do is draw a straight line which will represent the thrust line: this will be drawn four times the size shown on the plan. Then start by marking the first bulkhead and set the divider at the thrust line and put the other point at the lower part of the fuselage. Then set the divider on the thrust line and mark off four times. This will give you the depth of the front bulkhead. You can go right along down the fuselage in this way and when the bottom is finished, the top can be done next. The same procedure is done to get the top view.

Start by laying down the sides: these are made one atop the other, in this way they will be more alike than if one at a time were made. After that is done the firewall can be cut out of plywood as shown on the plan. The fuselage is now to be finished, so separate the two sides which by now are dry and add the cross-pieces; notice that the bottom on the forward part of the fuselage is narrower than the top. After the crosspieces are in position the front bulkhead is cemented in place.

The balsa blocks are now added to the top and bottom of the ship. They are cemented to the fuselage lightly so they can be removed after. Shape the blocks to conform with the plan and with the former. After they are shaped to the shape that is wanted they are removed and hollowed to 1/4 in wall thickness.

The lower cowl is now cemented in place, while the upper one is held in place with a small rubber band. The landing gear is now bent to shape and bolted in place with clamps. The motor mounts are cut and bent to shape and then are bolted to the firewall. This will depend upon the motor used, however, they must be lined up so they will hold the motor and the thrust line will be the same as on the plan..." 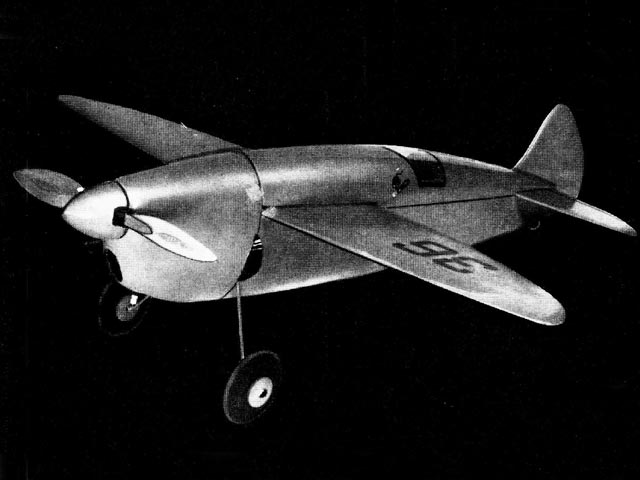