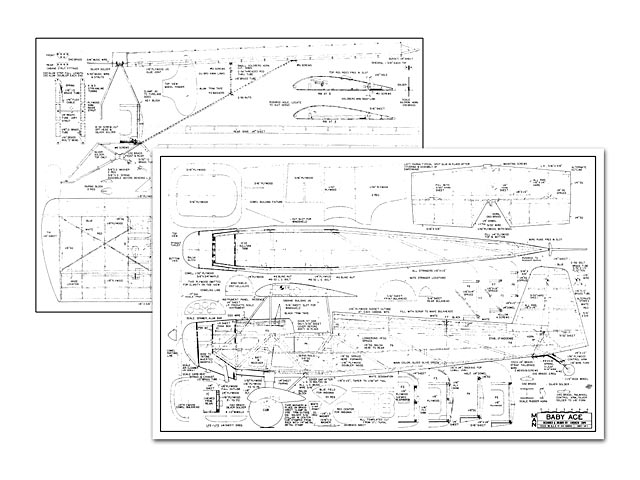 PREFACE (Taken from Ace Aircraft Mfg Co literature): First, a bit about these airplanes. They go all the way back to Mr OG Corben who opened an aircraft factory in 1923. A few years later he came out with a ship he called the 'Baby Ace.' This Baby Ace was the granddaddy of today's modern up-to-date version, the Model D. Mr Corben sold the early version in kits, and several were built in the thirties. Later the Federal Government placed such restrictions on home-built aircraft that none could be built, so the Ace designs lay dormant for several years.

In 1953, Paul Poberezny, president of the EAA, acquired all the old Corben Aircraft rights. This included the Baby Ace and the Junior Ace. He was joined by Stanley J Dzik, a former Waco engineer, and together they redesigned the old Baby Ace. Paul and a group of friends turned out a new Baby Ace in about nine months_ This version of the Baby Ace was known as the Model C; and it was featured in Mechanics Illustrated in a three months' series back in 1956. This series of articles gave the EAA a tremendous boost and was, a great help in putting the EAA on a firm footing. It was also discovered that there was considerable demand for plans, parts and kits for such an airplane as this.

Since both Paul and Stan were executive officers of the EAA, to dispel any suggestions of a profit motive, the design rights to the Baby Ace and Junior Ace were sold to Cliff DuCharme of West Bend, Wisconsin. Again the Baby Ace was redesigned, reengineered and refined. Special tools were designed and built to turn out Baby Ace parts in quantity. This refined model is known as the Model D. A few years later, Cliff DuCharme sold the rights to this improved model to Edwin Jacob of McFarland, Wisconsin. Thurman G. Baird, owner of Ace Aircraft Mfg. Co., 106 Arthur Rd., Asheville, North Carolina 28806, acquired the rights from Mr Jacob. It has been estimated that there are about 350 Baby Aces flying today and hundreds more being built. Ace Aircraft Mfg. Co. feels that it is, hands down, the No. 1 home-built in the world today.

A legitimate question regarding this project might be - which came first, the chicken or the egg? Since I had done some work on Father John Fitzgerald's full-sized Baby Ace, could there be a better way to choose the subject for a scale construction than one I had helped to build?

Father Fitzgerald acquired the partially completed airframe in early 1972. I built the tail surfaces and welded the engine mount, landing gear, lift struts and all fittings to the fuselage frame. The covering, painting, assembling and test flying were done by Father John. The first flight took place in August, 1973.

Around Christmas, 1973, my flying buddy, Jerry Messier, was looking for a subject for an R/C Stand-Off Scale model. After reading the AMA Rule Book and much talking, we decided to have a look at the Fitzgerald Baby Ace. This seemed to be an ideal choice. Since it was based only 25 miles away, we could get all the pictures and measurements we might need. The paint scheme was olive drab and yellow with stripes like the old Curtiss-Hawk P-6E which would be a natural for a MonoKote cover job.

The more Jerry and I talked and planned about this project the more interested I became in building the Baby Ace myself. We made a deal - Jerry would finance the project, and I would do the building. As stated in the preface, there are more than 350 Baby Aces flying today. A modeler could check around the small airfields in his area and probably locate one of them. Then he could obtain all the pictures and proof-of-scale measurements he needed for a one-of-a-kind Stand-Off Scale model. This is not a beginner's project, but it is not too complicated either. I will cover some of the things that might need clarification.

FUSELAGE: The fuselage uses spruce longerons and lots of plywood in the forward area. The use of epoxy glue is a must. The ca bane struts willtake much time and should be done carefully. A jig arrangement, as shown on plans, was used to hold the cabane wires in place while fitting the wires and silver soldering. The lower end oft he cabane struts are sanded with 80 grit paper and have notches filed in them to help hold them to the epoxy in their slots. The plywood area of the fuselage was given a coat of epoxy before covering to protect it from the fuel. The cowling around the cockpit area was covered with MonoKote before it was glued in place. The stringers on the side and bottom were tapered before gluing in place.

The cowling was built from 1/32 plywood and a balsa nose block. This method of construction was taken from an article in June, 1974, RC Modeler(pages 58-59). All doublers were added, cutouts made..." 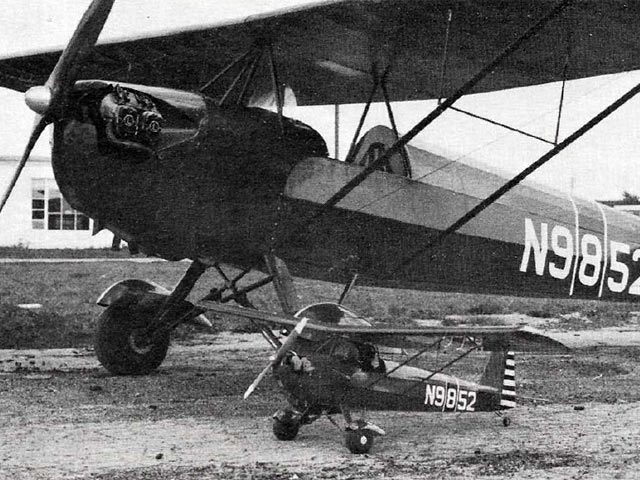