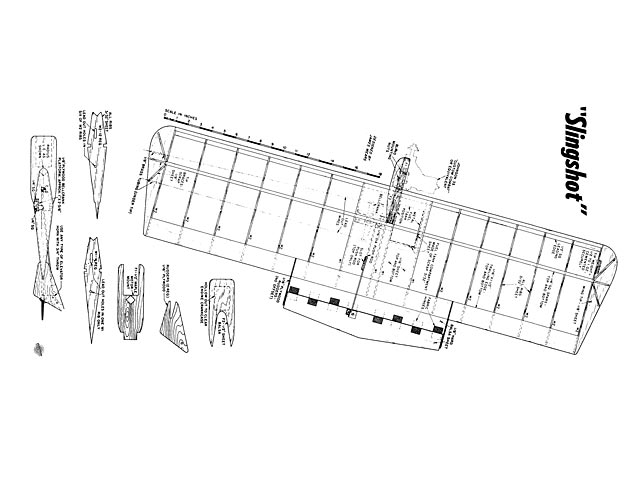 Slingshot, a high-performance control line combat model, can fill your trophy case with something more than pipe dreams! It is a popular design, having won 3 first-, 4 second-, and 2 third-place trophies in seven area meets for the 'Lubbock Texans' club. At the Dallas Nats it was clocked at 102 mph pulling a streamer.

Even if you are not an experienced Combat man, this ship will give you speed and confidence. A hot mill up front is not too important until you have some 'wins' under your belt and are heading towards regional or national meets.

This simple 'fused-wing' maintains positive control under the most adverse weather conditions, yet has speed and snap in all maneuvers. The diamond airfoil and relatively high aspect ratio wing adds little drag and keeps the model solid on the lines. The stabilizer connects directly to the wing, intro-ducing a 1-1/4 in moment arm to the elevator hinge line. This eliminates the tendency of many wing jobs to shudder or stall in violent maneuvers. Twin rudders which skid on hard surfaces and serve as a point for streamer attachment impart a 'different' look.

Motor mount (F1) is maple or high grade plywood, 1/2 in thick (2 x 6 in is just right). I prefer solid maple, but if you can get aircraft or marine grade plywood, that's fine. The mount is slipped on the 1/2 in sq leading edge and pre-cemented to slip between center W1 ribs. Rudders are 1/16 plywood. Drill streamer holes and sand to a sharp edge. Stabilizer and elevator are hard 1/8 balsa. Do not sand stabilizer until it is fastened to wing - this way you get a smoother joint. Wing tips and tip braces are from same material as stabilizer and elevator.

When wing assembly is dry enough to handle, motor mount and leading edge are slipped in place and cemented. I use either Pactra C-77 cement or Elmers Glue here. Be sure mount is straight with no up- or down-thrust. If a tank is used, install it now, as the top spar wedges it in place..." 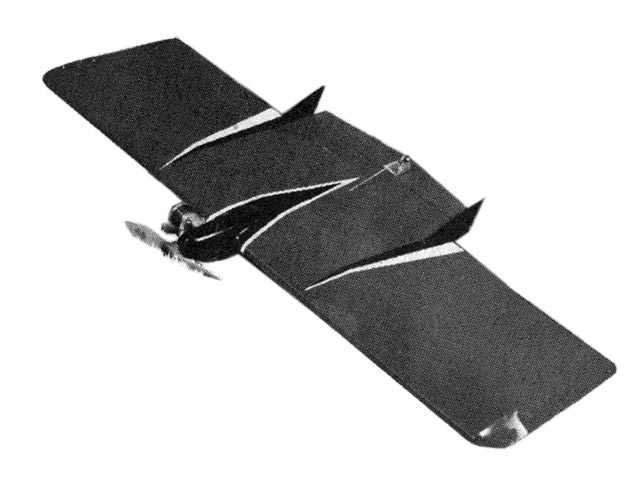