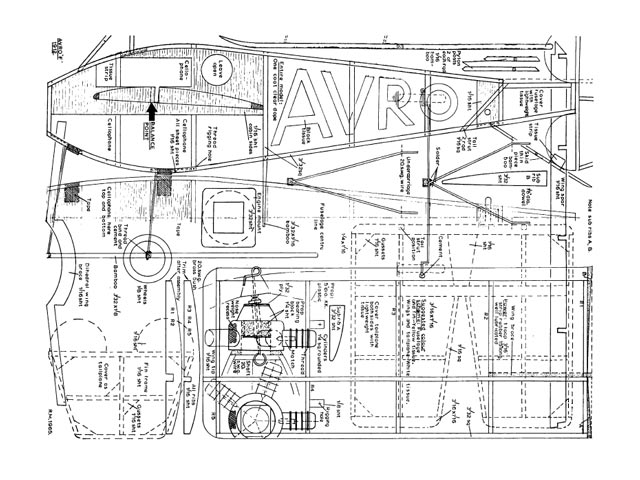 ALL of us owe a great deal to those gallant men who started out, over half a century ago, to conquer the air. The model we are presenting this month is a scale model of the Avro 'F', which first flew in 1912 and was designed by AV Roe. Its span was 29 feet, length 23 feet, loaded weight 800 pounds, and it was powered by a 40 hp five-cylinder Viale engine. Also, it was the first cabin-type aeroplane in the world.

Our model Avro 'F' does require a little skill and care to build, but it flies well and will capture for you some of the excitement and suspense of those early days of flying. The stages for building the Avro 'F' are shown in the 'easi-build' sketches, so we are confining these instructions to advice on the trickier stages and to notes on test-flying your model.

Cover the fuselage and fill in the cabin windows with thin cellophane. Use lightweight tissue for covering, water shrink and give one coat of clear dope. Do this before cementing the tailplane, fin and wings in place.

Before binding the bamboo central skid to the two undercarriage 'V's, moisten the front 3/4-inch and bend up gently. Around the thread binding rub a coating of balsa cement. Build the two wing panels as shown. You will need a tracing for the port wing panel. When covering, leave the inner underside panel open. This will help you to make an accurate union between the wing mainspar and the wing dihedral brace.

The correct dihedral: After the wings have been assembled to the fuselage, check that there is an equal amount of dihedral under each wing tip. The inner underside wing panels may now be covered, shrunk and doped. The wing bracings, so characteristic of these early aircraft, may be omitted if desired, but the original model has made dozens of flights without damage to the thread bracing and there is no doubt that the bracings add much to the 'old timer' look of your Avro F.

Note that the 5 inch diameter KK plastic propeller has the cone of the spinner filed off. Very few early aircraft had the refinement of a spinner over the hub of the propeller. By the way, a 5 inch diameter balsa propeller fitted with a free wheel clutch, would increase the duration of flight. One important point, check your construction frequently, using a set square. Also, use coloured tissue on your Avro F, not coloured dope, as this adds too much to the finished weight of the model. The engine should have the crankcase painted silver, the cylinders black and the cylinder heads silver... " 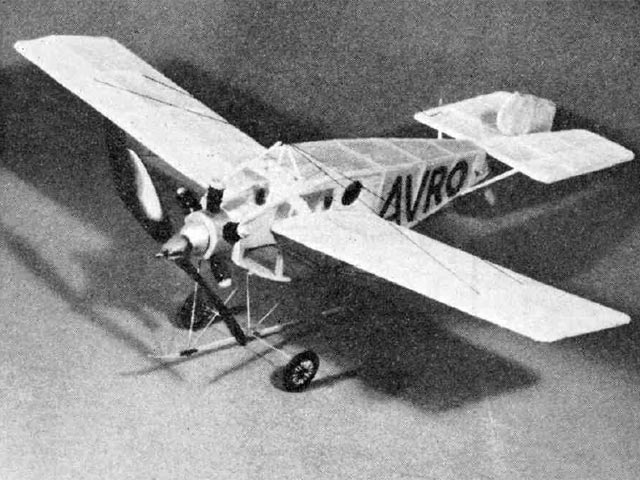