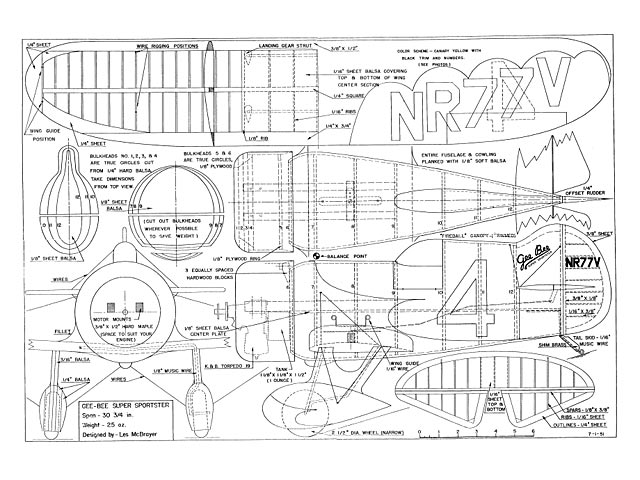 Quote: "The hottest racer of it's day, the glamorous Gee Bee Super Sportster is here converted into a successful control-liner by one of the country's top hands.

One of the most famous of all racing airplanes, the Gee Bee with its short stubby design makes an unusually attractive control-line model. Although a little harder to construct than some models the builder will be rewarded with a smooth easy to fly model which can be used for Scale or Team Racing contests. The Gee Bee will attract great attention wherever it is flown.

Gee Bee NR-77V was built by the Granville Brothers in Springfield, Mass. It was powered with a Pratt & Whitney Wasp Jr engine developing 525 horsepower. The unusual design immediately earned a such nicknames as the Flying Silo and Flying Milk Bottle. Lowell Bayles flew the Gee Bee in the 1931 National Air Races at Cleveland, Ohio, Flying in the Shell speed dashes he averaged 267 mph. This qualified the Gee Bee for the 100 mile Thompson Trophy Race. Flying a beautiful race, Bayles won the Thompson at an average speed of 236 mph, breaking the old record by about 35 mph.

Late in Novenber 1931, Bayles flew his stubby yellow and black racer, now equipped with a larger engine, in a n attempt to set a new world's landplane record. He was unofficially clocked at 307 mph, but timing difficulties prevented a new record.

Article pages, thanks to RalphB. 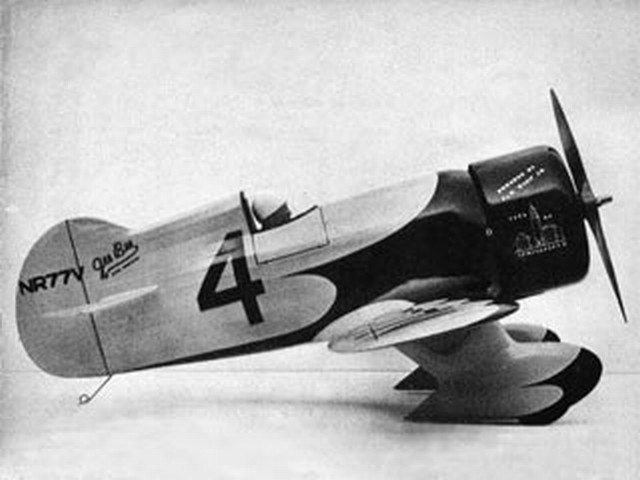