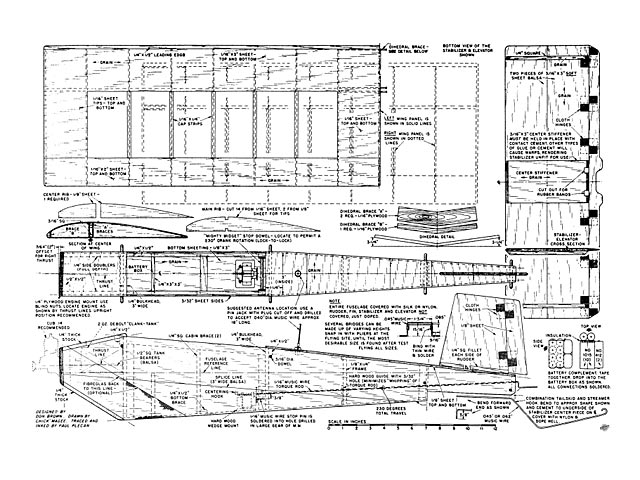 Quote: "After having given serious consideration to flying radio-control combat and thinking of the possible consequences with anything like a six foot airplane and TTPW or reed equipment, it seemed a lot wiser to design an outfit specially for this purpose.

Your R/C Combat plane should be as small as possible and inexpensive to build. The control system must have proportional elevators if you hope to get near enough for a 'kill.' (Incidentally our group is about equally divided between 27.255 and 'hams' on 50-54 megacycles - thus making two or more planes in the air at one time possible.)

When considering a control set-up, our minds naturally slid into a familiar, well-worn groove - galloping ghost, or as we prefer to call it, the 'Crank' system. This project also, presented an oppor-tunity to design a force set-up to specially favor the 'Cranks' peculiarities: The craft must have snappy action with a minimum of control surface, particularly elevator. This will eliminate the characteristic gallop and will reduce actuator current and air loads. The resultant airplane is not very pretty but it is a good flyer and will take plenty of punishment due to its simplicity and lack of complication.

Chick Magee collaborated in building the first pair of planes and drew the plans which have been used by local modelers to turn out a number of similar planes including a biplane and some very pretty 'cleaned-up' jobs.

Construction is very simple with a minimum of cutting; as you will note fuselage lines have been extended on the plans. This eliminates measuring and tracing parts. Just lay balsa over the plans and using a straight edge, draw from extension lines. At the same time, mark locations of the fuselage bulkheads. Bottom planking is cut to size with its grain lengthwise, the fuselage built right on top of it - double glue all joints. Cover wing and fuselage with nylon or silk. Do not cover stabilizer or rudder; use balsa filler on them and as few coats of dope as practical for an adequate finish. Keep weight down in the tail section. A landing gear may be employed but it increases the tendency for the planes to 'lock horns' in any possible mid-air collision. Landings are smoother without any gear as the ship will not nose over. If you fly on a paved runway, it might be well to fiberglass the nose section as indicated on plans. A nylon propellor will last many flights.

Combat sessions are crowd pleasers and also an education in depth perception. With us, mid-air crashes have outnumbered cut steamers but the damage has been minor in most cases. Anyway, this will not daunt the spirits of the true enthusiasist..." 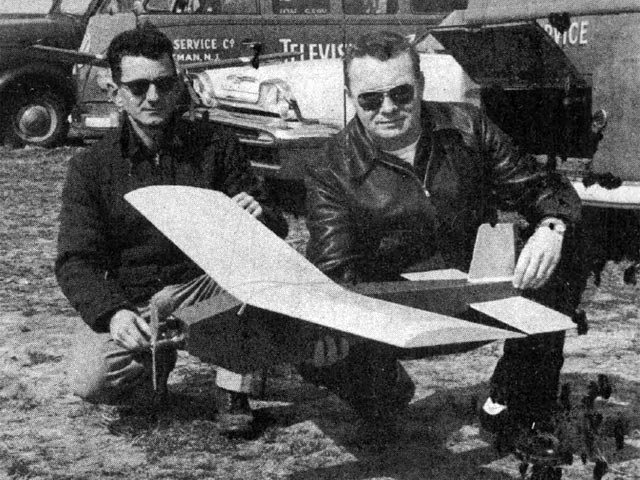 Hello, I hope you are doing well and are safe. For the Don Brown Ramblin' Wreck (oz11479), here are two photographs from John Worth's archives [pics 005-007]. The red and yellow model is with Don Brown, the other with checkered wingtips very probably with Chuck Magee.
I am currently buiding one of them, see: https://www.rcgroups.com/forum...
Best modelling regards.
JeanMariePiednoir - 20/04/2020
Add a comment