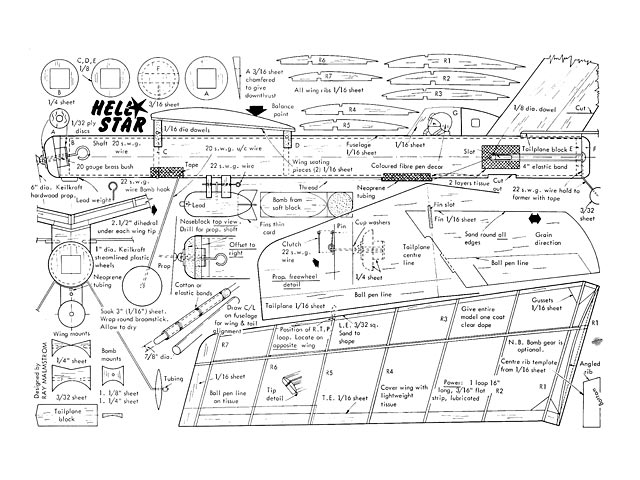 Quote: "Hellstar. Ray Malmstrom rings the bell again with an 18 in dandy for indoor activity.

Hellstar possesses what the car salesmen call an 'optional extra' in the form of a simple to install bomb (or midget glider) dropping gear. Fit it, or forget it, as you wish - Hellstar turns in a great flying performance either way, and unlike that optional extra on a new car you get the extra on this job for free. Feel inclined to have a bash? Great!

Then let’s get cracking with the simple structure. Soak a 13 x 3 inch sheet of balsa in warm water for about 20 mins. Then wrap it around a broomstick, dowel rod, etc of approx 7/8 in diam. Rubber bands or thread will hold the balsa sheet in position. Leave it to dry, preferably overnight. Cut out the circular formers, B, C, D, E. Open out the balsa tube and lightly mark their positions on the inside. Cement in place, close up the tube and cement well along the join. Hold in position as before until set.

Draw a line down the centre of the fuselage tube to help you line up the wing mounts, tailplane block, etc. If you are going to fit the release gear cut the rear dowel slot, otherwise just drill a 1/8 in dia hole. Reinforce the slot with two layers of tissue doped on. Also, cut a small rubber motor access hole, fix the fuselage below the rear dowel peg. Add former A to nose. This is chamfered as shown to give downthrust to the noseblock. Bend tailwheel wire and push upper end into former E. Hold with a small piece of silk or tape, well cemented. Add tail former E.

Bend u/c wire to shape and cement in place on fuselage tube, reinforce with silk or tape. Put 1 in dia, wheels (KK plastic streamlines) on axles and retain with a piece of elec tubing from which the wire has been removed. The tubing must be a tight fit on the axle ends. Cut out the two wing mounts, mark their positions on the tube and cement in place. Cut two pieces of 1/16 sheet and make the wing seating on top of the mounts. Add 1/16 in dia dowel rods to the wing mounts. The wing on Hellstar is adjustable and removable and these dowels hold the rubber bands retaining the wing in position. Cut the tailplane block from 3/32 sheet, shape carefully, and cement centrally at end of fuselage. Give entire fuselage one coat of clear dope and very lightly sandpaper.

The insignia of the Swedish Royal Air Force on our original Hellstar were painted on thin paper with poster colours, and then dry rubbed with candle grease and polished with a piece of clean rag. This not only improves the appearance but gives some measure of water-proofing the markings. They were then cemented in position. A band of coloured tissue is doped around the nose for decoration and added strength. Cut the fin and tailplane from 1/16 sheet, sand round the edges and give the parts a coat of clear dope one side at a time and pinning to building board while drying to avoid warps. The squadron numerals on the fin and fuselage are waterslide transfers.

Cement tailplane to tailplane block seeing that it is at zero incidence. Slot the fin into the tailplane and cement, checking that it is upright. Cut out cockpit piece G, give a coat of dope and paint in the pilot, cement to fuselage and fin. Build a left and right wing panel. Use centre rib template to obtain correct angle of centre ribs, join panels together. Check that there is 2-1/2 in dihedral under each wing tip.

Cover wing with lightweight tissue, shrink and give one coat of clear dope. Pin one wing panel at a time to building board. Use little 1/4 in sheet balsa blocks under leading and trailing edges to keep wet undersurfaces clear of board. With this method you avoid our old enemy, warps.

Build up the nose block, noting that when viewed from the top and rear the hole for the brass bearing bush should be drilled a little to the right. This angle (off-set) will take care of propeller torque, use a 6 in dia hardwood KeilKraft prop (from your model shop) and fit the simple freewheel shown on the plan.

If you wish to fit the bomb release gear cement the bomb mounts centrally below the fuselage where indicated. Also on the centre line cement a small length of neoprene tubing. Hold in place with two layers of doped-on tissue. This tube acts as a guide for the release thread. Make a wire release pin from 22 swg wire, to the pin tie a length of fine thread. Run the thread through the tubing and tie it to one side of the rear dowel peg. Arrange ths so that when the peg goes to the rear end of the slot the release pin will be clear of the bomb hook. Make bomb from soft block fins from thin card. Weight nose of bomb with a tiny piece of lead.

If you would like to drop a midget glider we suggest that you make the glider from 1/16 or 1/32 sheet, with a wing span of around 4 to 5 in.

Swedish marking on the wings of our own Hellstar are cut from blue tissue (the wings are yellow tissue) to save weight. A 4 in long approx rubber band operates the bomb release, the band is slipped over one end of the dowel peg, passed around the end of the fuselage through the slot in tail former F, and slipped onto the other end of the dowel peg. Some adjustment (by trial and error) of the tightness of the rubber band may be necessary to get the best moment for releasing the bomb.

You can now install the rubber motor (first lubricate well ) and balance your Hellstar. Balancing is very important, don’t skip it! It should hang level both from front and side views when suspended by a pin and thread from the balance point. A tiny amount of weight may be added to nose or tail to achieve correct balance.

Test glide over long grass on a calm day. From a hand launch (launch gently, never throw the model) Hellstar should glide down to land about 20 - 25 ft in front of the point of launch. Obtain a straight glide. Slightly bending the rudder trailing edge will correct a turn. Bend in opposite direction to the turn. You can then try a 'power-on' flight. If model dives reduce the downthrust, if it stalls increase it, if it banks violently to the left increase the off-set angle.

Take time with your trimming and you will be delighted with Hellstar’s performance. 35 to 45 second flights are common even with the commercial prop. Fit a carefully carved balsa prop and you’ll be heading for the minute. Chocks away - lets roll!" 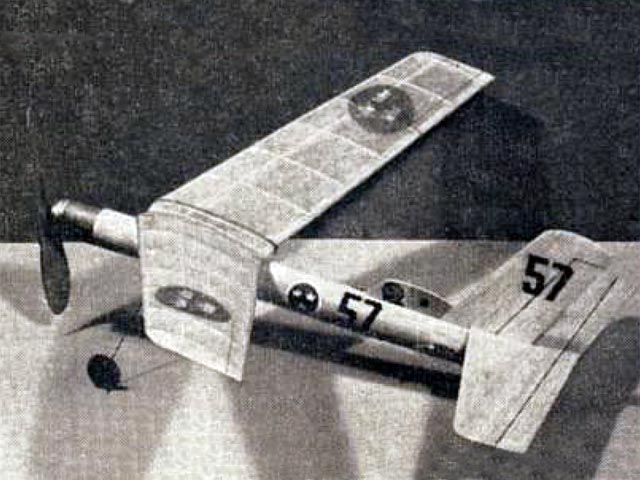