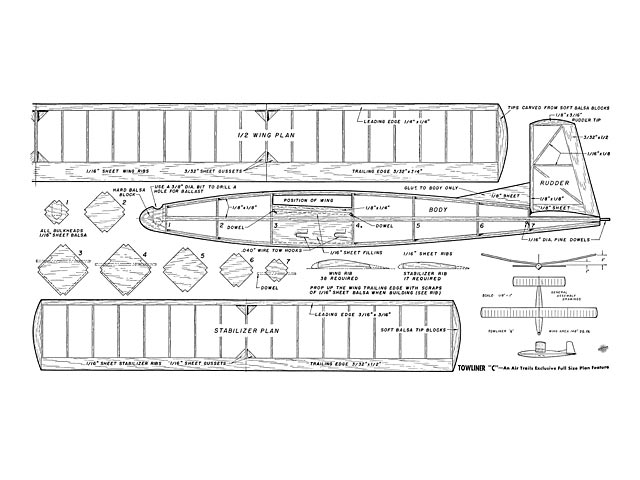 Quote: "FOR contest work and sport flying this small Class C towline glider is as ideal for the beginner as the advanced flyer. It is small, simple to construct, and a dream to fly. It will equal the performance of the big Class D and E jobs without the expense of building a six-foot model.

Flown in two major contests its performance proved its worth as a thermal-riding sailplane. It took 2nd place in the '46 PhiIly Flying Circus with a 7 :56 flight, and 1st in the '47 Richmond, Va, meet with 4:32, an out-of-sight flight from which the original has never been recovered.

Unusual points in design of the Towliner 'C' which give it excellent performance are the stab and wing configuration. The stab has 50% of the area of the wing, a feature rarely seen on a glider. Thus it supports a good share of the weight of the ship in flight. The sparless wing was designed to flex while under tow to smooth out the climb.

Construction should give no trouble if the plans are followed closely.

Start by cutting the fuselage formers from 1/16 sheet and cementing the 1/8 sq longerons in place. Cement the balsa nose block in place and hollow out the weight compartment. Cement the 1/8 x 1/4 wing mount strips between formers 3 and 4; raise leading edge 3/16 for incidence. Fill in below the mounts to the longerons with 1/16 sheet. Cement the 1/8 sheet rudder fairing to the fuse and sand to a streamline shape. Cover the fuselage with tissue.

Cut out wing ribs and cement with 1 in spacing between the leading edge and the jasco trailing edge. Block up the trailing edge so it will fair into the rib section. After dihedral is put in, cement the joints several times. Cement the 1/16 gussets in place and the solid balsa wing tips. Cover the, wing with tissue and cement the dihedral breaks again. The stab is of similar construction.

The rudder is built flat and sanded to a streamline section. Cover with tissue and cement to the stabilizer. Cement the wire towhooks on the le ft side of the f use-lage and the 1/16 dowel in the rear.

When ready to fly the Towliner 'C' assemble the parts with rubber bands and add weight to the nose until you get a flat glide with a left circle. Attach a short line to the front hook and tow gently. It should go up with very little forward motion. When model is adjusted switch to the rear hook and use a 100-foot line. Then watch the Towliner head for the clouds.

One note of caution: in a high wind it will be necessary to walk back toward the model (with the wind) because of the fast climb." 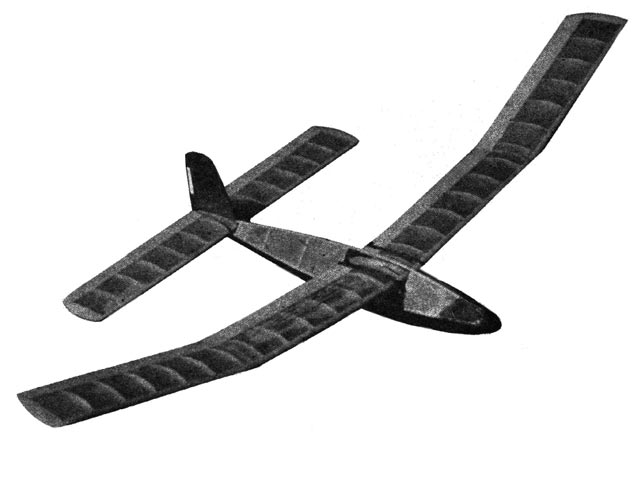