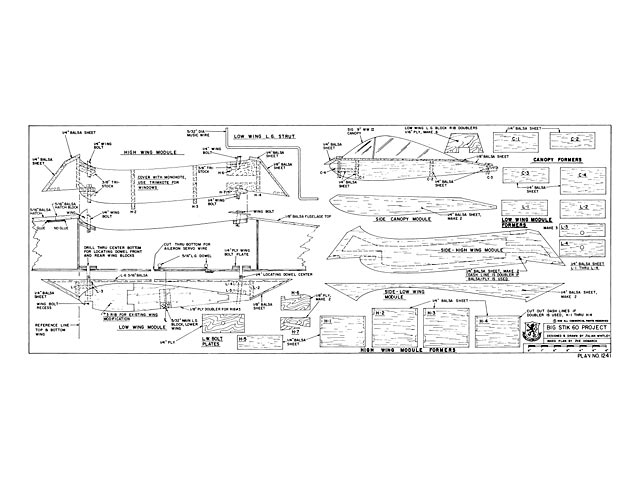 Quote: "This project actually began in the sixties with a Jensen Ugly Stik (oz1253). At that time, I only had visions of being able to fly R/C. Years passed and local interest increased, someone to teach became available, and I learned to fly. First a twenty size Stik, then the Jensen. It was love at First flight. The Ugly Stik is now stored away waiting for my grandchildren.

During the passing years Dennis Gargus, later to become my best friend, instructor and test pilot, bought, built and flew a Big Stik 60 (oz11467). After many hours of watching him do slow low passes, hover and fly backward in the wind, land on one wheel, and when the wind was right, land almost vertically, I knew I must have a Big Stik.

His Stik's wing was built with dihedral. I really enjoy scratch-building, so I got his plan and built a straight wing for him. After using this wing for some time, he had the misfortune of being shot down by a fellow flier leaving his transmitter on. The Big Stik is a tough airplane and I ended up with the damaged wing.

Using his plan, I was in the process of building a Big Stik 60 of my own. The airplane was built as per plan with the following exceptions:

(1) The shape of the vertical fin.
(2) Dowels were installed to mount the main gear.
(3) The front of the fuselage was modified so as to use wing dowels in front and bolts at the trailing edges.
(4) A home-brewed cowl was built.

Having given a lot of thought as to how a Stik could be converted to a low wing airplane, and having very good luck in converting an airplane called the Strikemaster (oz5958) from shoulder wing to low wing (RCM March 1974) started dreaming. By the way, l still have the original Strikemaster and two of the seven low wing versions that I built.

Since my Big Stik 60 was finished, it was necessary to build modules that could be added without requiring major modification to the finished airplane.

If it is possible to build a low wing module, why not a high wing? And if you have a high and low, why not put them together for a bi-wing version? I first concluded that the wing location and Center of Gravity would conform to the original plan.

All three modules are built using your airplane as a jig.

The High Wing Module: Since I had built my model to use wing dowels, problems were encountered making everything fit. You will not have these problems with the plan as drawn.

All module sides are shown using 1/4 in balsa (hard is best). For the high wing module, a weight saving could possibly be gained by using 1/8 balsa ply with a 1/8 doubler. The doublers are shown in dash lines on the high wing side. If balsa ply sides are used, cut and cement the doublers to left and right sides. Lay sides on a flat surface using weights (ie old fluorescent ballast) to be sure they dry straight. Dash lines show former modifications also.

It is my opinion that the entire project could be built with 1/8 and 1/4 balsa ply (Global Hobbies). This product has a fantastic strength to weight ratio and thin and medium CA works like a charm. Use 1/4 ply for wing module hold-down plates for strength.

Cut all hi-wing parts prior to starting construction. If your airplane was built as per plan, the parts should fit with little to no modification. If not, make necessary modifications.

Cover the wing saddle with plastic wrap. Place HWM sides in wing saddle, pin and support sides to assure that they are in line with, and vertical to, fuselage sides. To simplify construction, install front 3/8 tri bolt plate support and 1/8 ply wing plate doublers before locating the side on airplane. Locate sides on plane and install formers H1 through H5. When dry, rmove module, check all glue joints, and install wing bolt plates. Sheet front and rear module ends.

Use two 1/4-20 all thread rod sharpened to screw into front and rear wing bolt plates. Leave enough extended as to mark drill hole location in bottom plates of HWN. Drill holes accordingly (a little oversized will make installation simpler). Remember the rear bolt is at an angle. I used Du-Bro nylon 1/4-20 nylon bolts because the center hole is a hex, and a 3/16 ball driver can be used to install them. When satisfied with fit, install on the model and set on a flat surface. Place your wing in the new wing saddle. Now check distance from tip to surface. If measured distance is not equal, sand and/or trim saddle accordingly.

Be sure when HWM is installed that formers do not interfere with existing servo linkage. Now using your wing as a guide, locate drill and tap upper wing bolt plates. When all is okay, the HWM can be finish sanded and covered with MonoKote. Use your imagination.

The Low Wing Module: It is important to locate the LWM properly. The front of the wing saddle should be located directly below wing saddle of your Stik. A square was used to make a reference line. First cut two LW hold-down plates. The front plate then is installed with epoxy in the bottom of your Stik behind former F2..." 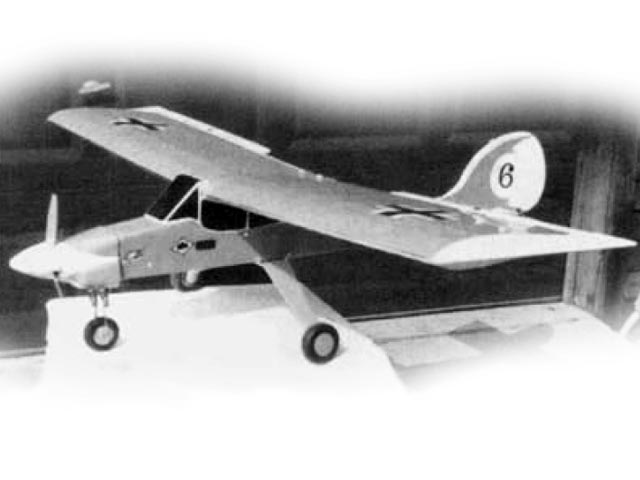