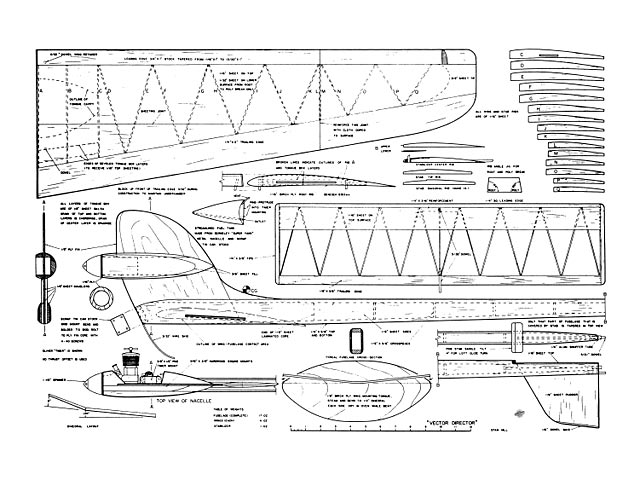 Quote: "The 'Vector Director' is a different sort of contest model - with a reason. Any new design must justify its existence by doing something better or easier. Without this, it has little point in being. The Vector Director was designed to be non-critical and safe in a vertical climb pattern, yet capable of the highest performance.

The design problem is that nearly all contest ships have a safe and an unsafe side for turn under power and that this, together with the need to maintain ade-quate decalage for longitudinal stability, forces the use of a spiral climb pattern that unquestionably robs them of some altitude. Thrust/weight ratios are such that models can be made to climb almost straight up with little help from the wing's lift. Indeed, this very lift works against us by introducing a looping moment that must be compensated for at the expense of stability or performance. This dictates a clean ship of the minimum weight permitted by the rules. How to keep it under control? Let's tackle the problem of characteristic climb first.

Torque and spiral propeller wash pres-sures dictate the turn that must be flown in order to climb safely. The common low thrust line pylon model. must climb to the right - left is disastrous. A high thrust line ship, with the bulk of the fuselage below the thrust line is exactly the opposite - left is safe; right is bad. A straight climb can be safe only in a design in which left and right are equally trouble-free. If we are to design a model to do this, then yawing and rolling moments induced by torque and spiral wash must be balanced by proper placement of all parts of the model that are in the prop wash.

Without going into a highly detailed account of the reasons for placement of each part, it is sufficient to say that a forward fin model with thrust line about midway up the fin, a narrow fuselage, and an underslung rudder accomplishes this end well. The Vector Director can, in fact, be launched in either right or left vertical bank, immediately assuming its characteristic near-vertical climb attitude with perfect safety.

Happily, this same very high thrust line location also solves the second problem - that of longitudinal stability. The lower the thrust line, the greater the stabilizer incidence necessary to prevent nosing up, resulting, in a low thrust line pylon model, in very low decalage and over-sensitive power trim. The Vector Director's VHTL layout is the only one that can balance looping tendencies in straight flight and still maintain enough decalage for safety.

Summarizing, the Vector Director can get a little higher with greater safety than its competitors, paying off in the consistency needed to win.

Lest it seem implied that this approach is entirely original, may we hasten to say that Keith Hoover, Oscar Czepa, Allan Brown, and Russ Hansen have all, independently, come up with astoundingly similar configurations. In fact, Keith and I, upon advising one another of new developments invariably found that the other had also arrived at the same conclusion.

Nearly all the construction is extremely simple and the plans self-explanatory, so no step-by-step coverage of the model is given. Instead, several items that need clarification or special emphasis are presented. It is highly recommended that highest quality selected light weight wood, such as Sig Contest Balsa, be used throughout.

FUSELAGE: All joints involving the plywood fin core should be made with white resin glue, conventional slow-drying model cement being adequate elsewhere. While not necessary, a single layer of fiberglass applied from the nacelle to a point near the trailing edge of the wing will contribute to rigidity and eliminate fuel soakage problems. Silk and four coats of dope will do the rest. Do not glue in the ply wing tongue until all other construction is complete and has had a couple of days to dry out to final weight. This will permit precise location of CG by shifting of the tongue. In spite of the tongue being plywood, use regular cement - the water base of white glue may relax some of the steamed-in dihedral... " 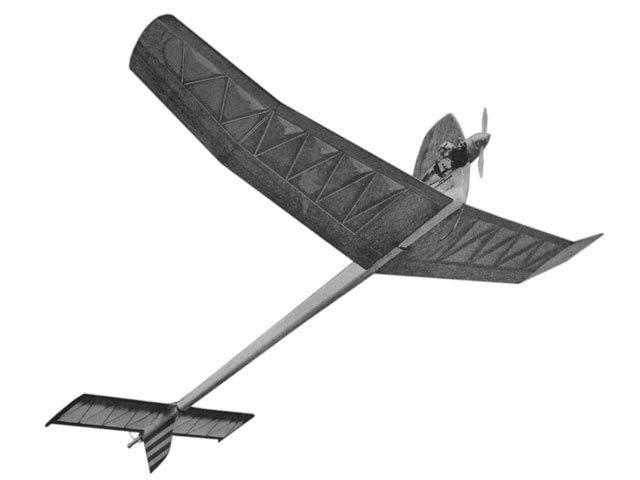