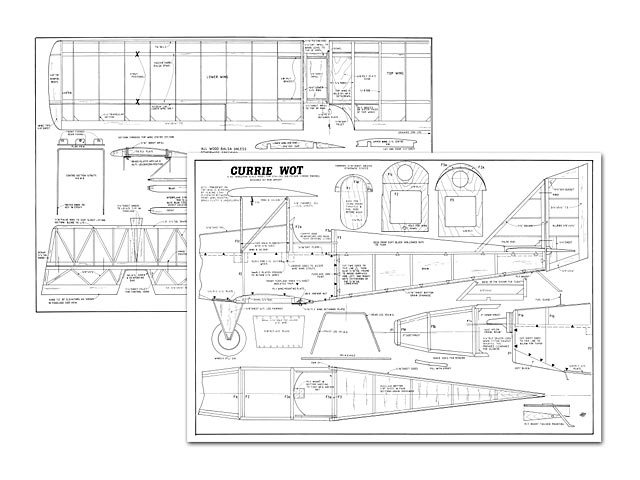 Fifty three years ago Mr JR Currie, who was a pilot and lecturer at the College of Aeronautical Engineering, designed this little single seat biplane. It was of wood and fabric construction and initially powered by a 40hp Aeronca -JAP two cylinder engine.

Today it is still a firm favourite with the Popular Flying Association whose members have constructed many examples.

The aeroplane has very good proportions which I thought would result in an easy to fly model and one which would, at 1/6th scale, be of a convenient size to be transported fully assembled to the club field.

A full description and drawing of a WOT appeared in the March 1965 issue of Aeromodeller. Reprints of this article, together with a good 1/24th scale dye line print, are available from the Plans Service, ask for plan number 2788.

To avoid the necessity of making a cowling for the Walter Mikron engined WOT shown on the above mentioned drawing I based my model on a JAP engined version which was flying in 1958 and registered as G-APNT.

For more years than I care to remember my series of light scale models have used flying surfaces held in place by the tried and proved elastic bands and been flown using only rudder and throttle controls. This WOT departs from that simple conception by having bolted on wings, tail unit permanently secured to the fuselage, and a third servo controlling the elevators. Your editor will no doubt approve of these, for me, 'hi-tec', arrangements.

You will find the drawing had plenty of annotations to assist in the construction. I feel this is better than embarking on a blow by blow account of how to glue A to B.

However, may I offer a friendly word of advice to those who may be embarking on their first scale model? Don't treat the drawing as you would an engineering blue print and expect it to be correct to plus or minus one thou'. In my experience no two models end up the same even when made from identical kits let alone form a magazine plan. You will perhaps be less frustrated and more successful by adopting a 'cut and fit' policy, for example, when making the wing struts.

Tail first: The tail unit is a good starting point. It is very easy to make and gets you into the swing of things. The wings should present no problems as they too are very conventional. It is only a matter of rib cutting and assembling them on to the spars directly over the plan. The fuselage is best made in two boxes, front and rear, which then mate together at F3. It is advisable to cut the grooves into which the centre section wires fit before cracking and bending the 1/4 in sheet sides. I have used this method of fixing centre section wires for a number of my light scale models and it has never failed yet.

When you have the basic fuselage together it is time to think of servo mountings and their associated control rods. These will vary from model to model. in my case the rudder and elevator servos were mounted under the pilot, the throttle servo up front with the battery and the receiver under the centre point. This arrangement brought the CG to about 25% of the wing chord which turned out to be about right.

With the model covered and decorated in the scheme of your choice and all gear installed it is time to set off for the field.

Fly like real: Now I am not bothered about loops, rolls, inverted passes at zero feet and the like. That's for experts. My aim is to have a scale model which looks realistic in the air and flies at as near a scale speed as possible. So whether my WOT will do these stunts I don't know. However, I do know it is a nice stable flier and yours will be likewise if you go about tests flights in a methodical way. Don't be too eager to see daylight under the wheels. These small scale aeroplanes will not fly out of your hands like a Junior 60. If you alter the trim make only one adjustment at a time. Small bites at the cherry is the rule! Good luck with your WOT. " 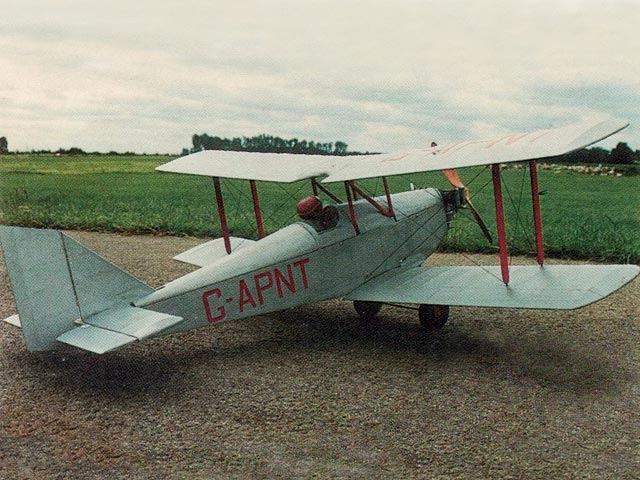