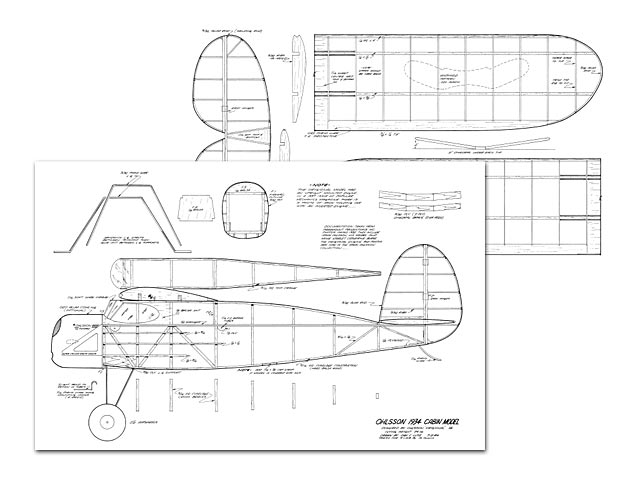 Ohlsson 1934 Cabin Model (Ohlsson Original). Originally dating from 1934, this is the redrawn plan by Dan Lutz and Al Novotnik, from an article in MB Oct 1987.

Back in 1934 Irwin Ohlsson, along with Roland Barney, designed and built what was at that time the smallest gas model engine. Here's the story of the engine and the plane it flew.

The history of this model dates back to 1934, when the Los Angeles Herald Examiner newspaper wanted to expand its circulation. I was approached by the paper to design a model airplane that would be given to young boys as a premium for obtaining new subscriptions.

The first prototype was powered with a compressed air-type powerplant developed by a Mr MacFarland. It used a mixture of smokeless gunpowder, sawdust, lime, and engine oil. This mixture was compressed into a stick similar to a Jetex fuel capsule. It was inserted into an aluminum tube and ignited. The pressure of the gas drove a five-cylinder radial motor which had a 38-inch bore by a 1/4-inch stroke, rated at 1/25 hp at 2500 rpm. The model for this adventure was almost identical to the one in this construction article.

A demonstration flight was made in a dry field just below the Arrowhead Springs Hotel for the manager of the Examiner newspaper. The model flew quite well, but, after landing, it burst into flames. He (the manager) proceeded to stomp out the flames that engulfed the model and surrounding dry grass. Needless to say I resigned after this disaster and turned the whole project over to Ira Hassad. He too had the same problems with fires, and the project was abandoned.

Later on I had an idea that a small gasoline engine could replace MacFarland's folly. I contacted a friend by the name of Roland Barney, and the two of us worked together for several months. We emerged with two very small engines for power-plants. They had a 1/2-inch bore by a 5/8-inch stroke, resulting in a .12 cubic inch displacement. These were considerably smaller than the Brown Jr and Loutrel engines that were being manufactured on the East Coast. One engine was installed in the cabin model, and the other one was used in a cute little biplane that resembled a Fleet Trainer.

Early one morning we left for Muroc Dry Lake (now Edwards Air Force Base). The sun was just coming up over the horizon. After a little trimming, we had both models flying very realistically. They both lacked the power to gain more than about 30 feet of altitude over the desert floor. As I look back now, the ten-inch diameter propeller that we were using was just too big for the little engines. Maybe an eight or even a seven inch would have done the trick and let the engine rev up and produce the added power to fly the models higher and longer.

Once again I contacted the newspaper with high hopes of selling them on our newly developed gasoline engine-powered model. The manager had been fired, there was no longer any interest in model airplanes, especially the ones that catch on fire, and the subscription program was called off. So this great idea came to an end. But there was a happy ending. My interest in engines and model airplanes led me to a very rewarding profession as one of the leading engine manufacturers for several decades to follow.

I often wondered whatever happened to those two little engines (I must have sold them). Then several years ago, I received a letter from Erwin Schwartz. He said that Victor Savage installed the engines in a couple of high-wing monoplanes back in the late thirties, with gratifying results. He also mentioned in his letter that he still had one of the engines and was going to return it to me! Several weeks later, when I received it, I could hardly believe my eyes. Here was the very first Ohlsson engine back in my hands. It is a piece of history that holds a very special place in my heart. Miracles do happen!

I might add that T & D Research Associates is in the process of marketing a replica of this engine. Larry Jenno of J & J Aircraft Accessories is doing the tooling and all the machine work. He is well-qualified and has the know-how to duplicate this very first Ohlsson engine.

Getting back to the model, my friend Dan Lutz developed a set of plans from the photos taken by Paramount Productions in 1935. We both think it makes a good nostalgic old timer sport model. Dan has built four of them, and they all fly great. The construction is straightforward, using the basic box-type fuselage. The top crutch is added by using a balsa or pine block for the gap between it and the longerons. Add the compression members (uprights) then slide the block out. This will give you a top frame that the wing rests on that is parallel with the top longerons. The wing should have a 1/16-inch positive incidence.

The 3/32-inch round aluminum welding rod, which is used for the flying surface out-lines, can be purchased from most welding supply shops. In order to form the outlines, cut a template from 1/4-inch plywood and pull the rod around it. The rod will want to spring back, and it will be necessary to clamp one end to the form. Use your thumb and continue to shape it until it fits the out-line of the form. Also, sand the rod with 180 grit. This will give you a good gluing surface for construction and covering.

The model will fly well with any of the smaller R/C engines. All the prototypes so far have used the OS 10 FSR, which is plenty of power. If the model is built light and a mini airborne system is used, a good .049 would also fly the model. By selecting your wood and covering materials you can control the overall weight of your model. I personally like fairly firm balsawood and silk and dope for all all-around sport models.

Also, I might add that this 42-inch model was quite small for a 1934 design. There were very few small bore engines available at that time, and the weight of the coil, condenser, batteries, and flight timer made it almost impossible to fly a model of this size. To my knowledge, it was the world's smallest gas model back in 1934." 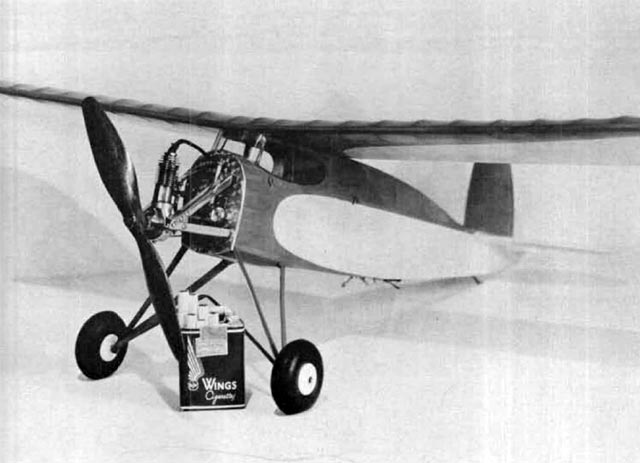