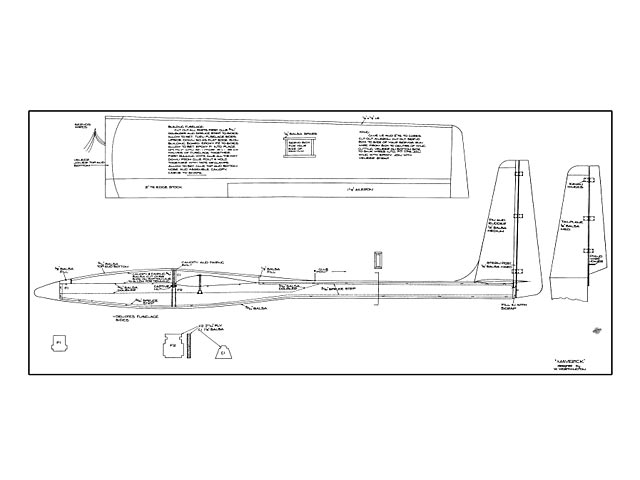 Maverick was designed to create a glider with a different appearance, yet still be quick and easy to build and strong enough to withstand sport flyers' landings. In the air, the performance is good enough for it to keep up with all but the most specialised models. Two wings are shown on the plan, an intermediate wing with which, if the weight is kept down, the model can match 100 inch class soarers. Alternatively, the areobatic wing can be fitted for a sparkling slope performance.

A thick wing section was chosen for two reasons, it allows the use of conventionally sized servos for the ailerons and it gives a very smooth and easily recoverable stall. The fuselage is very strong, even though it's very thin just in front of the tail. I'm very pleased with the way the combined hatch and wing fairing turned out, it looks very neat and allows easy access to the radio. One word of warning, do make sure the hatch has a secure fixing (proper catches, not just elastic bands) or the battery and receiver will involuntarily eject during negative-G manoeuvres.

A foam wing was used on the prototype and, as already indicated, a conventionally sized servo was installed in each wing panel to directly drive the servos. Proper leaf and pin hinges were used for maximum security at the high speeds Maverick can reach, while the overall model was covered with Solarfilm. All up weight of the prototype was about 3-1/4 lbs.

Construction: Medium balsa was used throughout except where detailed. Start by cutting the two fuselage sides, preferably from a single sheet of four inch wide balsa as it's more economic and the two sides are more likely to be matched in density and grain than if two separate sheets are used. Mark them left and right (it's better to be safe than sorry) then add the fuselage doublers. Cut formers F1 and F2, then fix the 3/16 sq spruce longerons in place, making sure the glue is kept clear of the rear fuselage. When dry, the former F2 can be epoxied in place and the fuselage sides and former turned upside down on a flat surface to dry. Make sure it's properly aligned before the epoxy starts to cure or it will be impossible to build a straight fuselage. After the epoxy has cured, F1 can be epoxied in place and similarly allowed to dry. Now the rear of the fuselage can be pulled in, first running PVA glue along the unglued sections of the spruce longerons to fix them together, but pull the sides in and hold them to-gether with clamps or sellotape before the glue dries.

When dry, the fuselage can be com-pleted by adding the top and bottom sheet-ing, nose block, the 1 in and 1/2 in balsa fills and the 1/4 in ply wing bolt plate. Now it's time for the canopy-wing fairing to be built.

This can be a little fiddly so wait until you're in the mood (building wise). Cut out the canopy sides and F3, glue the 1/4 in strip to the sides and epoxy F3 into position. Sit the canopy structure on top of the fuselage and pull the canopy sides in so that they line up with the outer edge of the 3/16 doubler and then epoxy the balsa stays into place. Sand the top and bottom edges of the canopy level and glue the top sheeting into place..." 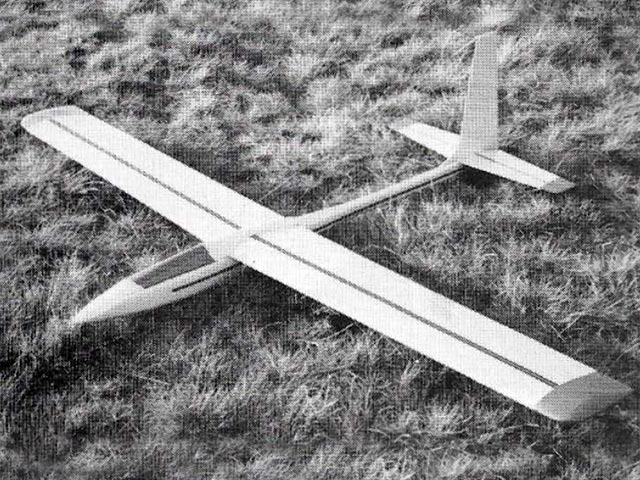 Nice looking ship, very sleek and I like that tall rudder, gives the model a unique appearance. But it seems there is some information missing from the plan. The article references two different wingspan layouts and also mentions root and tip rib templates R1 and R14 for a built-up wood wing, but none of that is shown on the plan.
Phil Bernhardt - 22/08/2019
I agree, the Maverick design is very elegant but rather enigmatic. Why, for instance, does the article show two different radio installations?
RussellH - 23/08/2019
Add a comment