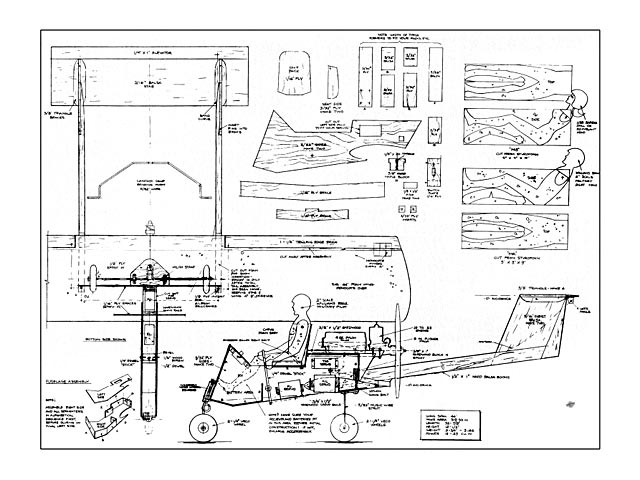 Quote: "Simplicity of a popular EAA design inspired this very flyable R/C Funster. Choice of a pilot makes this plane your very own and has everyone at the flying field taking time from their flying to comment. Mister Funster, by Ted Teisler.

To design an aircraft of extreme simplicity is the ultimate goal of most 'design-it-yourselfers'. The Bede planes, Bensen's Gyro-Copters, the Breezy, hang gliders, etc, all attest to this never-ending quest. And now, with ever-increasing technology and experimentation by home-builders, the gap is narrowing between the dream and the reality.

In 1971, at the annual EAA (Experimental Aircraft Association) Oshkosh Fly-In, I saw one of these planes - the Aerosport Rail. It looked simple in its basic airframe design, yet to my amazement I found that its engineering history was quite complicated. It was small with forgiving flight characteris-tics and a real 'Funster'!

This is where yours truly fits in. It just so happened that it was my idea of the ultimate Radio Control plane - one that can be put together quickly, cheaply and yet affords maximum flying fun. One week later, after having made a few alterations to the original Rail's design, such as two booms instead of one and a single engine instead of two, I had a rough version on the drawing board. The next weekend it was on the runway. (I don't waste time when I like something!)

The finished version impressed me even more than I thought it would , not to mention the impact it had on my club cronies - There goes Ted again with another hair-brained idea! What have you done now? Can't you build a kit, Ted? Undaunted, I ignored the sentiments of my 'friends' and had a ball! The Funster will do just about everything in the book except a knife edge, as rudders were abandoned for a simple three servo set up: elevator, throttle and aileron, the latter controlling the nose gear.

To me, the most unique feature of the plane is the styrofoam mannequin that sits up front and can be made to operate the elevator and throttle controls if so desired. Admittedly this is the most complex part of the construction, because it has to be carved from styrofoam for the sole purpose of cutting down weight. A family seamstress comes in handy here to make the mini-clothes, which are limited only by your imagination.

The female version uses a Barbie doll head with a carved styrofoam body. (Here again, your imagination can make her as sexy as you care to - or dare to.) The male version uses a Williams Bros two-inch military pilot's bust attached to a carved styro body. Follow plans for rough body shape; then carve gently to rounded realism. The clothes cover much carving error, so don't worry if you're not a Leonardo da Vinci. The final effect in the air must be seen to be truly appreciated. A simple rubberband seat belt completes the ensemble.

CONSTRUCTION: Fuselage: The fuselage is constructed of 3/32 plywood sides and formers. The former width must be cut to accommodate the width of your radio, engine, etc. Make sure you include enough radio padding in these variable dimensions before you cut them - this is a very critical point. Cut out sides as shown on plans making sure the throttle servo cut outs fit your throttle servo; if not, alter to fit. Epoxy all formers, the elevator servo rails and the wing hold down block H to one of the fuselage sides. Then, epoxy the opposite side of this unit... " 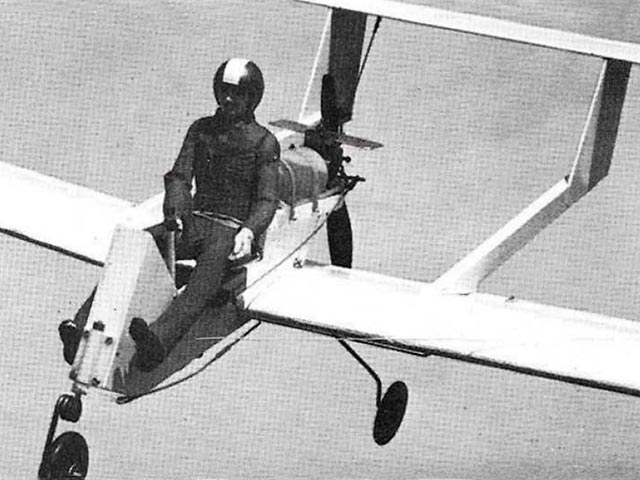