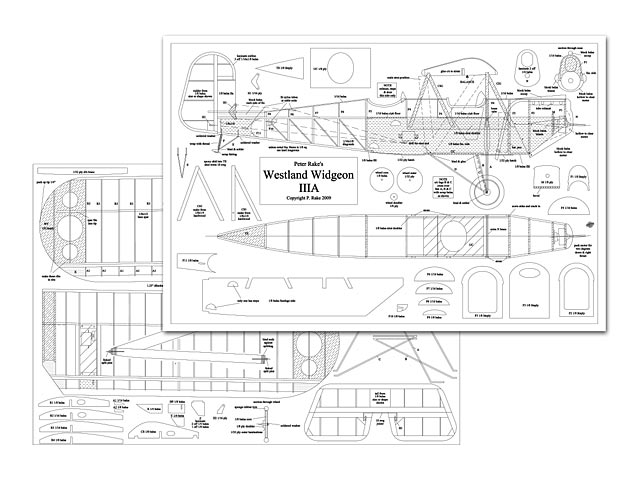 Quote: "The Westland Widgeon started life in 1924 as a two-seat parasol built for the Lympne trials set for that year Built entirely of wood and fabric-covered, with a 35 hp Cherub twin engine, this first version had highly tapered wings that folded flush against the fuselage. During a trial flight the lightly loaded and underpowered aircraft was pushed into the ground by a downdraft and totalled.

The remains were rebuilt into the Widgeon II with a 60 hp Armstrong Siddeley Genet engine. This particular version proved to have a better performance than the Westland Woodpigeon biplane during testing so was selected for production, but before the first production model was built, modifications changed her into the Widgeon III. Constant chord folding wings and plywood fuselage sides were added.

Prototype G-PEBW, powered by a Blackburn Cirrus II engine took to the sky in April of 1927 and was the version that went into production. Construction stopped in 1929 because of contracts for the Wapiti biplane for the Royal Air Force. (A military aircraft contract during that lean between-the-Wars period was something not to be passed up).

About 30 Widgeons were produced, the last few being the 111A model with metal fuselages and the divided main undercarriage. In addition to UK, examples went to Australia, Canada and Africa. I can only find one example in Australia that is restored and still flying. I like to think of the Widgeon as the grandfather of the Lysander of WWII. The IIIA version is the one we have modelled here.

Construction begins: I always start a model by building the things that I least enjoy doing first. Tails and wings are not my most favourite parts so we will start there. The rudder outline is laminated from three pieces of 1/8 x 1/16 strip wood. I make a cardboard outline of the surface using the inside line of the drawing. That way, when you add the laminations around it, the outline will be the proper size. Use a crayon or candle to cover the edge of the cardboard so the glue won't stick.

As much as I love using Hot Stuff cyan glue for all my building, I don't on laminated out-lines. I wet the strips and let these soak. I then brush on aliphatic glue. I call it yellow white glue. Pretty dumb huh? (Sounds a fair description to me, works like white glue, but is yellow. PR) All pieces are coated on one side, then stuck together and wrapped around the form. They are pinned and left to dry. The rudder is the only laminated surface on this model. Once it is dry, clean up the piece with sandpaper and build the rudder.

The fin is cut from sheet balsa. Be sure to add the balsa in-fill at the bottom of the rudder. It is the mount for the horn.

The tailplane is straightforward and built from strip wood. Just remember to add the horn mount (as with the rudder) and make the wire joiner before you hinge things, otherwise you will be rigging both elevators separately! Finish-sand both items, then set them aside for now and it's off to the wing.

Wing: The wing is built in three sections. You could make both panels removable from the centre section, or you can build it on one piece as I chose to do. I drive a Pick-up that can carry models in one piece, so that is how I build them. I am lazy and hate putting models together at the field. Yuck! So the choice is yours. Nothing is shown to make removable panels, but simple tubes and pins would be sufficient with the struts being used. These would support the wing to a large degree.

The centre section which, on the full size aircraft housed the fuel tank, is built first. The plywood dihedral brace is glued in behind the spar and sticks out both sides of the centre section when done. It will set the dihedral angle for you. If you go for the three-piece arrangement, you would need to fashion a box for it to plug into on the main panels. (Or omit the brace altogether and use wire dowels and brass tubes to mount the outer panels. PR).

On the main panels, the ailerons are full length and are built separate from the wing. Strip the proper size 1/8 sheet for the false trailing edge. I like to put the spar down first and then use a couple of ribs to space the leading and trailing edges. Once you have them correctly placed, you can add the ribs where they go.

Note that the two inside ribs of each panel are lower, for the sheeting to be added on top. The pieces numbered 'Z' and the wing tips are 1/8 liteply. The two tip ribs are just blanks that you add and then shape to obtain a smooth slope, down to the tip. I used light ply for the piece that glues to the inboard edge of R4, which is the thick rib for the struts. I like to use blind nuts and screws to mount the struts. You can use the method shown on the plans or come up with your own way.

Build the aileron as a separate piece, then sand and set aside. Do not forget the piece that the horn mounts in and note that the leading edge is a thicker piece than the wings' trailing edge. (To allow for shaping. PR)

Plywood plates for mounting the aileron servos are cut from 1/32 ply. I like to add pieces and frame the plates so they sit flush with the wing. Then I just tape the servo to the plate and tape the plate into the wing after covering - but I am getting ahead of my self a little.

Add the centre top sheeting and sand the panels and ailerons. The R1 rib is notched wider than the others to allow for the brace to slide in behind the spar. Set the dihedral at 1/2 inch under each wing tip and glue her together. I brought the servo leads out by the centre section struts and ran them down the strut into the fuselage. You can use a 'Y' lead in the wing or bring them out separately. The choice is yours. (It is possible to disguise the servo lead/s as fuel pipes, running from the (c/s tank into the fuselage. PR).

Sand everything again and make sure you have shaped your leading edges and tip ribs and set your wing aside until you are ready for covering. If you use the laser cut parts 1 must say that things just fall together. Everything is the right size and it fits. Takes all the work out of building and makes it funl!

Fuselage: OK! Now we get to the part that I like. When my Dad would build a model, he wouldn't stop until he had the fuselage up on the landing gear. At that point he would consider it an aeroplane. Then he would sit and smoke and look at it. I still remember that from my childhood!

Anyway the fuselage is built in standard 'Rake-fashion'. A plywood box front and a squared-up stick rear fuselage. Build the two rear side frames and square them up. Don't forget the two laser cut pieces F10 and F11. The front is squared up using both sides and F3 and F5. There is a balsa doubler that glues to each side between these two formers. Part UC glues on the bottom between the notches.

Add the rear to the front and make yourself a fuselage. You can now glue in the two 1/16 balsa cockpit floors, as they will help to square things up.

Cut a scribe line on the fuselage at F3 and crack the sides so you can pull them in and add F2 and F1. (The marking and scoring is probably more accurate if done before joining the sides to the formers. It's certainly easier. PR).

Hold off on part M until you figure out what motor you are going to use. I used an E-flight 450, which seemed about right. Mount your motor and then install part M with some right and down thrust. You may have to add or subtract a little from the sides of part M depending on the motor used..."

See 2009 build log by sweptside (of the plan prototype) on RCGRoups at
https://www.rcgroups.com/forums/showthread.php?1258710-Westland-Widgeon-from-Peter-Rake-plans 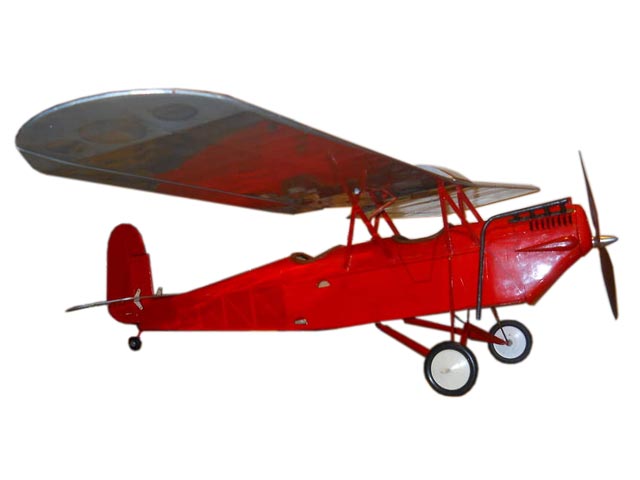