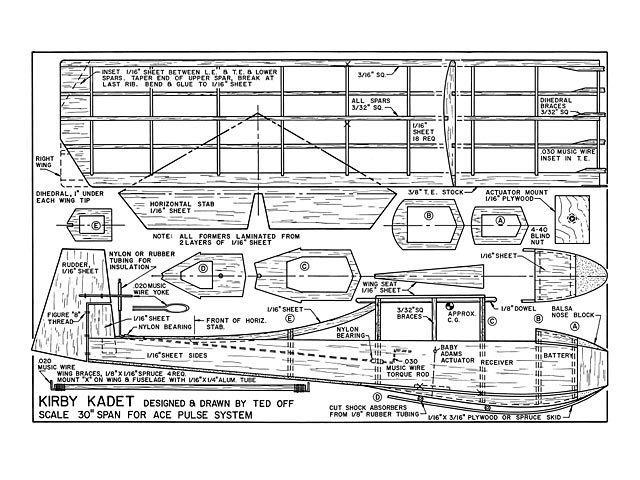 Quote: "An appealing small glider, scaled from the old original primary trainer for single-channel R/C, a fine flyer and lots of fun! Kirby Kadet Glider, by Ted Off.

Small gliders have always appealed to me. Several years ago, I came across a set of plans for a small free-flight model of the Kirby Cadet (oz5682) an Obscure Aircraft plan by Bill Hannah, now marketed as plan No. BH 137 by Peck-Polymers. It looked awfully small, but I thought it might fly with the Ace pulse system if it were 'beefed up' to carry the radio gear. With a few nights' work, the model was ready, and I proceeded to the local slope soaring site. With chuckles from the audience (and a few test glides), I pitched it off the cliff. A pleasant 10-minute flight followed, much to the surprise of everyone there, including me.

I have a stable of small gliders. Some are my own design. Many are kits or from magazine plans. To build one even smaller, which flies well, is an experience. To have it be an accurate scale model is an added bonus. After building the Kadet, I asked myself, Could I go smaller? The answer is really no. The Kadet is just about as small as one can go with commercially available R/C equipment and have a reasonably efficient flying machine. To go through the numbers:

The flying weight of the Ace pulse system is a little over 2 ounces. In general, one can build a glider to weigh about the same as its radio gear, without sacrificing durability. This gives an all-up minimum weight of 4 ounces. Then, if it is not to fly like a bomb, a small glider should have a wing loading under 6 oz/sq ft. For 4 ounces, the minimum wing area is about 100 square inches: the size of the Kadet.

The same line of reasoning can be followed using the new small two-channel digital systems that weigh about 4-1/4 ounces. Here, the minimum reasonable size ends up at about 200 square inches of wing area.

For those who are enthusiastic about Scale, the full-size Kirby Kadet is really not an 'obscure aircraft.' Over four hundred were built by Slingsby Sailplanes Ltd, one of the world's leading sailplane manufacturers between 1936 and 1948. With the exception of a couple of troop transport gliders built during World War II, this is the largest number of gliders of any one type turned out by any British manufacturer. A number of them are still flying.

The Kadet was a single-seat, intermediate training glider, As originally designed, it was Slingsby's first attempt at a soaring version of their nacelled primary glider. During World War II, it was used extensively as a training glider for British pilots.

For simplicity, the model I have chosen to illustrate in the plans is the original design. The plane, built during WW II, had a slightly lower rudder, and a wheel replaced a portion of the skid. The pictures are of this later version. The small dihedral and elimination of the tail skid and some rigging are the only significant deviations from scale. I have no information on color schemes so if you want to go the full-scale route, you'll have to dig up your own information on this subject. Additional details are available in British Gliders and Sailplanes by Norman Ellison (New York: Barnes and Noble, 1971).

CONSTRUCTION NOTES: Fuselage and Tail Surfaces: For strength, the fuselage formers are laminated from two sheets of 1/16 balsa, with the grain of the second sheet perpendicular to the first. These should be cut out and fabricated first. Because of the keel and raised wing, the fuselage cannot be built flat on a building board. However, the formers B and C are the same width and can be glued to the two 1/16 sheet sides while the fuselage is laying on its side, to get things off to a square start. The inside rear of these two sides should then be tapered slightly, so when pulled together they will match the 1/16 sheet rudder. Formers D and E can then be installed. A little ammonia or water on the portion of the fuselage sides in front of former B will help in pulling these together when gluing in former A. Installation of the me sheet keel is a 'cut and fit' operation.

The horizontal stabilizer should be glued to the fuselage before installing the torque rod for the Adams actuator. I used a small round jeweler's file to drill the diagonal hole in it for the torque rod bearing. Installation of this bearing is a little tricky. It and the front bearing should be epoxied in place carefully, with the music wire torque rod in place to assure proper alignment. After the torque rod has been bent to shape, the fin can be installed. It is keyed into the fuselage.

Although the rudder should not be laced to the fin and fuselage until the plane has been finished, note that, unlike most pulse installations, the yoke from the torque rod is fastened to the front of the rudder. Watch this when hooking up your radio installation, so that right rudder doesn't make the plane turn left.

I choose to mount the Adams actuator in small planes by screwing the main bolt holding the coil to a blind nut mounted in a piece of plywood on the floor of the model (rather than lacing the actuator to a vertical piece of plywood, as illustrated on the Ace R/C instructions). This method is necessary in the Kadet, because it allows one to remove the actuator without tearing the plane apart. There is one disadvantage If the plywood is not well glued to the sides of the model, a hard landing can break this joint loose and possibly damage the receiver..."

Quote: "Hi Steve, I trust you are doing well. Attached are some more files to go with the Kirby Kadet OZ #11450. The DXF file can be used by folks to laser cut their own copies of this glider. I include both DXF and TurboCAD 2016 format files. I drew the parts to fit exactly to the plans as published, then built it in this thread: https://www.rcgroups.com/forums/showthread.php?3576283
After a few finishing details I'll be posting in that thread some more photos. Hopefully this week I'll have it finished up. If folks in USA or Canada would like me to cut them a plane, I would be happy to do that. Contact me at andy@andykunz.us" 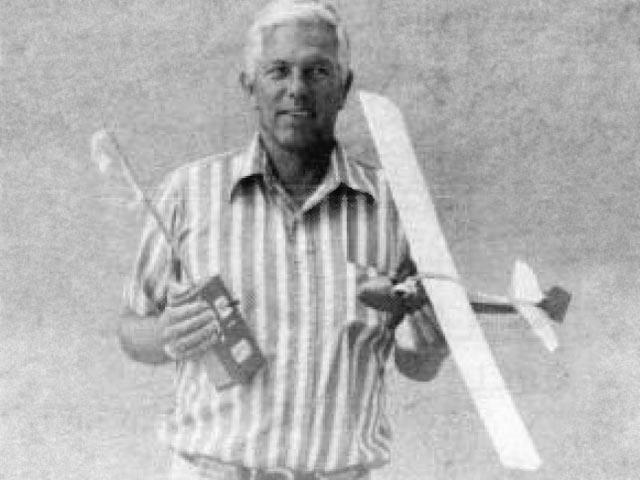