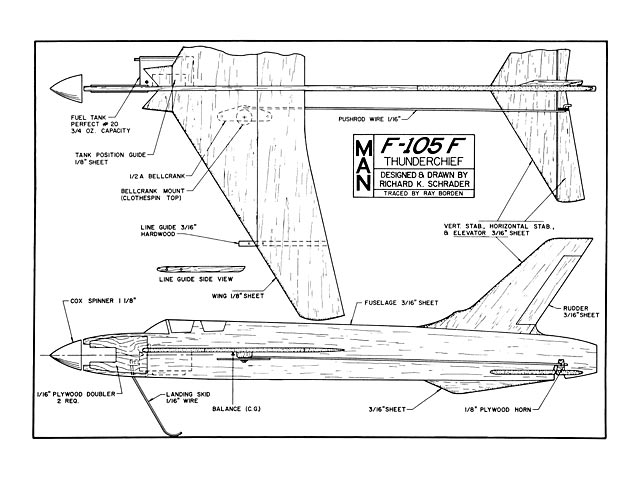 Quote: "Sleek, semi scale profile of famous fighteribomber. Republic Aviation continues its Thunder series with this new Thunder-chief, and we add this profile control liner to our other fun Stunters! F-105F Profile, by Richard Schrader.

McConnell Air Force Base, in Wichita, Kansas, was once home to the F-105 Thunderchief. I hear the fighters are gone now, save for those given to the Air Guard across the field. KC-135 tankers (military version of the 707) have moved in.

A friend and I used to go to the base on Friday afternoons when the school week was finished, and the time we spent in the company of Century fighting machines was time well spent. The way the Thuds blasted off, the engine roaring with the afterburner kicking in, the formations flying overhead, the approaches with the fighters 'breaking' behind the leader and the landings - all of this we enjoyed and appreciated.

This was where I first learned of the Wild Weasels, the unique team of flyers who launched a major bombing campaign against North Vietnam. They searched for and destroyed Surface to Air Missile (SAM) sites. When the air war over North Vietnam was in full swing, American planes laden with bombs became easy targets for the SAM's. A form of SAM suppression tactics became obviously necessary, and F-100's were used as the first 'Weasels.' Later the F-105F, a specially equipped, two-seater Thunderchief, took over the job. The crew consisted of the pilot and his 'Bear,' the electronic warfare officer who sat in the back seat and interpreted the radar scope's electronic messages and warnings. The pilot and Bear always flew together as a team, understanding and trusting each other's abilities completely...

The model of the F- 105F is an 049 powered control-liner, simple to build and a good flyer. It performs very well, yet it also is very stable in flight: there is no problem with the craft's being extremely sensitive on the controls. In the air, the outline of the plane is definitely F-105, when you see it from its profile view. In view of the rising costs of materials in this hobby of model airplanes, the F-105F is a fine plane for the beginner and sport flyer. Construction costs are relatively inexpensive.

CONSTRUCTION. Building the F-105F is straightforward. The wing is cut from 1/4 in balsa and then covered with Silkspun Coverite. This material saves filling the wood and sanding, and enables one to obtain a nice finish without spending a great deal of time. Brush on several coats of clear dope - do both sides at a time to avoid warping - and, between each coat, with #400 wet dry sand-paper, wet the surface and sand. While the wing is drying from the doping process, begin on the fuselage.

Quote: "Hi, Steve and Mary. Good afternoon. Today, I send you another of my CAD redraws. The 1/2A control line model 'F-105F Profile' by Richard Schrader (oz11448). As usual, it includes the vectorial PDF file, plus both CAD vectorial formats: DWG, and DXF. Greetings, from your friend. Valeria367" 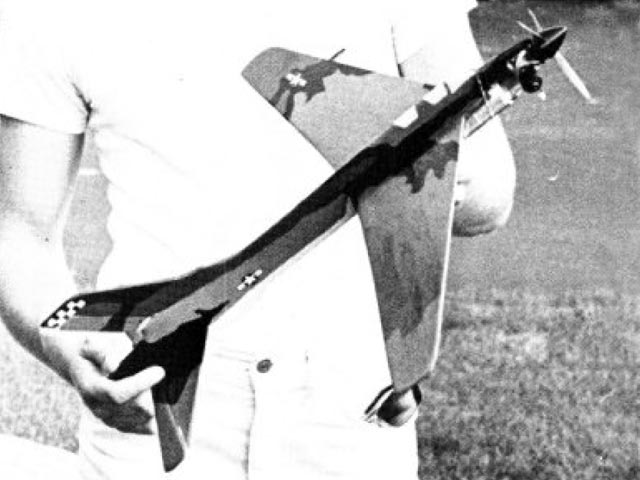