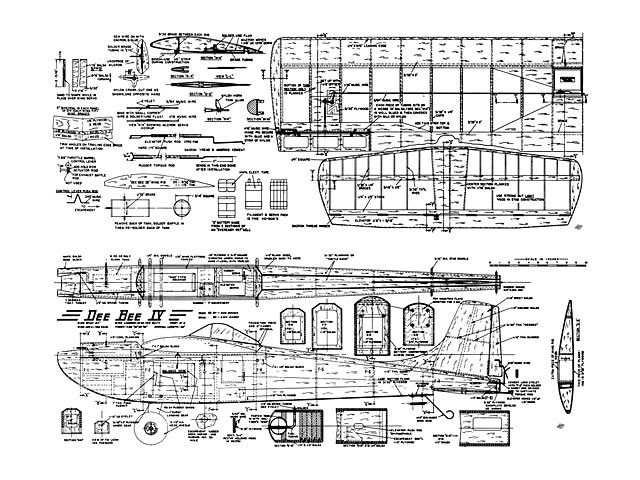 After three earlier planes and thousands of flights, Don Brown considers this craft ideal for the TTPW-CAR control system. Freely admitting it isn't a 'beautiful' plane, he points out it is truly functional. No wild bomb in the air, the Dee Bee IV is smooth as silk, will do any maneuver you desire - and won't give you ulcers while you are at it!

The model was demonstrated to a critical, expert, enthusiastic audience at the recent DC/RC 2-day Symposium in Maryland. It emerged from that affair with the designation of 'sharpest Multi contest plane in the East!'

TTPW proportional control, less complex than other multi-control systems, in my opinion is easier and more satisfying to fly. The proportional pilot needs only one stick to control his craft and has an infinite number of control surface positions, all simultaneous.

The main drawback has been the lack of ready-made actuators and an airplane with the proper characteristics to bring out the best in the control system. The airplane cannot be a modified reed type configuration because the requirements are vastly different. The actuator must be specially designed with low current drain and a practical centering system, not a warmed-over reed type actuator.

The Dee Bee IV is the end product of a development program aimed at getting the most out of our favorite control system - TTPW-CAR. Particular attention has been given to matching an airplane to the advantages offered by dual proportional control and steering clear of a couple of shortcomings inherent in the system.

In our opinion, we have really 'arrived' with this airplane. It flies fast, clean, and in a groove. Dee Bee IV will perform the precision pattern comfortably upright or inverted and any specialty stunt with ease. She has no 'cranky' characteristics what-ever.

The first problem encountered in pulse control of a fair size, fast airplane has been the lack of servo power available to move large surfaces on a short coupled airplane. However, in studying Walt Good's research on hinge moments and servo power, we found what is needed. By careful design, the control surfaces of Dee Bee IV are high aspect ratio in keeping with Walt's findings. At the same time, our tail and aileron moments are long. This makes for good leverage and smooth, effective control. The high flying speed of the ship is also used to advantage by keeping control surface movement to a minimum while obtaining necessary action for any manuever.

Incidentally, one of the most frequent pitfalls observed in proportional control flying is trying to get a duplication of reed type control response. This makes for unsteady control, particularly on the elevators. Settle for as little control as must be used to get the job done, and flying will smooth out amazingly. Dee Bee IV is capable and comfortable in inverted passes at 3 to 4 feet altitude. When coming across the field it gives the impression of being on a 'wire.'

With proportional ailerons, inverted flight is quite easy, as only the elevator stick movement is reversed. Rudder coupling is via a separate servo and through a 'soft' torque rod, allowing considerable 'blow-back' at high speed. This cleans up aileron manuevers that would normally be upset by an 'out-of-phase' rudder. The rudder linkage at the tail of the airplane will lock-up at the extremes, when needed, to stop the plane from blowing out of spins. If full rudder is pulled in at the top of a stall, it will reach its extreme position easily, due to low pressure on the control surfaces and will stay locked even in the most violent of spins.

To aid our relatively small ailerons in roll manuevers, the shoulder wing configuration with fairly low empennage was chosen. This allows the rudder to effectively assist in rolls..."

Quote: "Herewith a couple of photos from John Worth archive of Don Brown with the Dee-Bee IV in 1961. Don Brown is famous for his Quadruplex line of RC systems which he produced from 1962. Lots of information about Don Brown and Quadruplex in this link: http://www.rchalloffame.org/Manufact...lex/index.html
with all the schematics and more here: http://vintagercfiles.com/Files/Dee%20Bee%20Quadruplex/. Thanks again for keeping the Outerzone. Best modelling regards. Jean-Marie Piednoir" 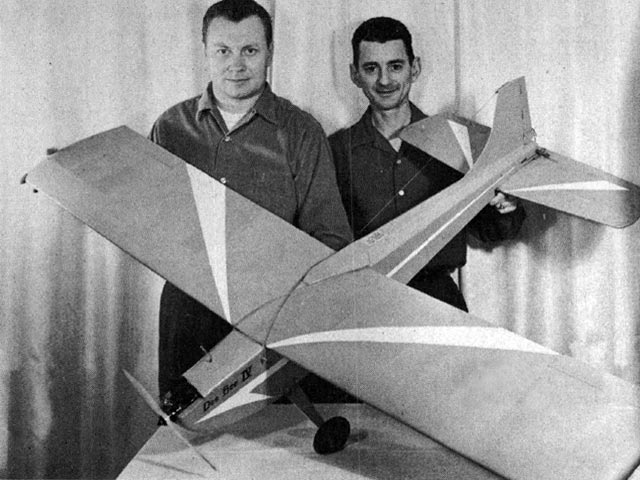