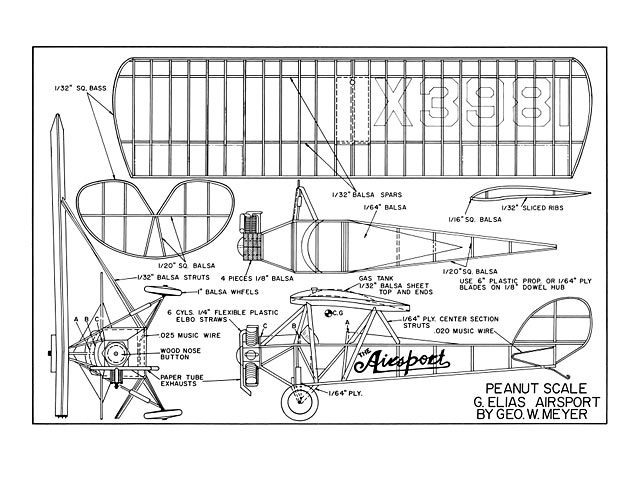 Quote: "This saucy parasol has enough wing area to compete with the Fikes and Laceys. Elias Airsport, by George W Meyer.

IN MY SEARCH for an aircraft suitable for a peanut scale with gobs of wing area that would compete with the Fikes and Laceys, I came across this aircraft in the 1929 Aero Yearbook. It is the Elias Airsport with a 28 ft wing span, 7 ft chord, and aspect ratio of four-to-one. It is ideal.

After Lindbergh's epic flight in 1927, the industry was booming and the manufacturers were trying to design aircraft that would be attractive to the airminded youth of the period. The Elias Company, of Buffalo, New York, had started out in 1917 as a government contractor of military aircraft and, after the war, built a variety of commercial and military aircraft.

With the demand for an economical, easy to maintain aircraft, Elias produced the first convertible 2-place, side-by-side aircraft, the high-wing Airsport EC-1. A cabin section could be buttoned on in a matter of minutes to produce a closed aircraft known as the Aircoupe - an option that could be purchased at a small additional cost.

The EC-1 used construction which included a chrome-moly steel-tube fuselage, with most parts interchangeable from right to left - exceptions being the landing gear vees and the upper wing panels. The landing gear shocks were steel coil springs inside the shock struts, which did not require maintenance usually required for air or oil shock struts.

The EC-1 was exceptionally easy to fly. If left uncontrolled in an abnormal attitude, it would right itself almost instantly and resume a normal flying attitude. You could put the machine in stall with full power, remove your hands from the controls, close the throttle - and the EC-1 would gently settle flat and go into a glide. The EC-1 could be forced into a steep dive with full power, hands removed from the controls, and would come out into a normal flying attitude.

Make the rear rubber hook and tail skid from .020 music wire; bend and glue it to the tail post and the rear of the top longerons. Form a small loop at the end of the tail skid, so you can install the pin in your winding stooge when using a rubber winder. Leave open the area on the bottom of the fuselage so you can install the rubber motor. This rear hook is the design of Dr John Martin, of the Miami Indoor Model Club.

Make up a dummy 6-cylinder (2-row, 3-cylinder) Anzani engine. Make the laminated balsa crankcase from 1/8 soft balsa. Make the cylinders out of the corrugated section of 1/4 flexible plastic elbow straws. Make the intake and exhausts of paper tubing by wrapping paper around a 1/16 rod. Glue and slide off the rod. Put 1/16 balsa disks on top of the cylinders. Make the rockers from scrap balsa and the single pushrod from tiny flower stems available at art and hobby stores. Glue with Hot Stuff all parts of the engine that attach to the cylinders. This is the only glue I have found that will stick to the plastic soda-straw cylinders..." 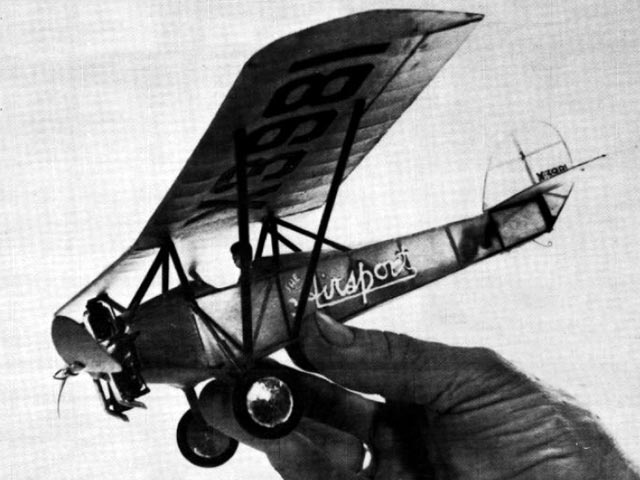 How can someone design, build and FLY such a pretty machine and not be a good person?
Miguel Morao - 15/08/2019
Add a comment