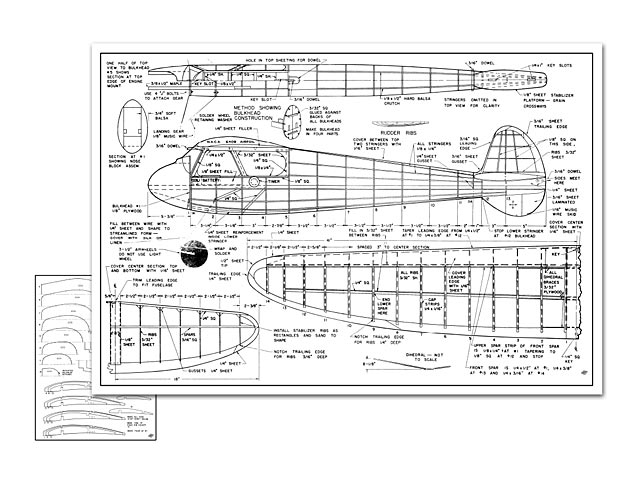 If we free-flighters were content to build airplanes that flew a bit more realistically and less like home-sick angels, we would have a lot more fun. Instead of lost ships and cross-country marathons we'd have many a good flying session out of every job that came off the work bench. When Air Trails asked us to develop a cabin job around the Cyclone-type Class D engines we were tempted to tone down performance until contest-type flights were eliminated, but then would others want to build such a ship?

What resulted was a compromise, a dependable cabin sportster, with good but not spectacular performance. As far as the designer is concerned, this ship was going to be flown on far less than full power. We recommend that you do likewise, but if you do want to fly your ship all out, you can be sure it will provide very creditable results.

Although the fuselage is not a box, it is not difficult to build. A well rounded fuselage and stringer construction always enhances appearance. A crutch is made from 1/8 x 1/2 in hard balsa, after which the top half of the formers are fastened in place. When the top half of the fuselage has been completed, it is removed from the bench and the lower halves of the formers are glued on. The mounts are 1/4 x 1/2 in hardwood. Every gas modeler is familiar with this popular type of construction. However, there are a few details on this particular ship which may require clarification. In general, you will note that the grain of the formers runs vertically, and that each former is reinforced cross-grain by strips of 3/32 square balsa.

Station #1 consists of a 1/8 plywood firewall to the rear of which is cemented the 1/8 balsa former halves. We suggest pinning the crutch to the bench in such a manner that the firewall hangs over the edge of the bench. This permits the installation of the plywood as one piece, rather than in halves. Station #2 is built up from a piece of 3/16 sheet, laminated with a piece of 1/8 sheet; the grain of the thicker sheet runs vertically and that of the thinner sheet crosswise to the fuselage. The remaining bulkheads are normal in every respect.

The fuselage is considerably strengthened for the landing gear from the firewall hack to station 4. A piece of 3/8 x 3/4 hard strip is glued across #2 bulkhead at the point where the landing gear wire is attached; the wire itself runs through a groove cut in the rear face of the strip before it is cemented in place. Two pieces of 1/4 in square run diagonally upwards from the rear side of former #2, where the landing gear attaches, to the crutch members at station #3. Pieces of 3/16 sheet are tailored to fit between the stringers from stations #1 to #3, from the window sill, completely down and around the fuselage and up to the other window sill. This sheeted-in portion of the fuse-lage is shaped and sanded.

The cabin formers that extend from stations #1 and #3 at the bottom window line up to the wing support_ are made from 1/8 sheet, reinforced at their outer edges, as shown, by pieces of square strips. The 3/32 sheet window outlines provide further reinforcement..." 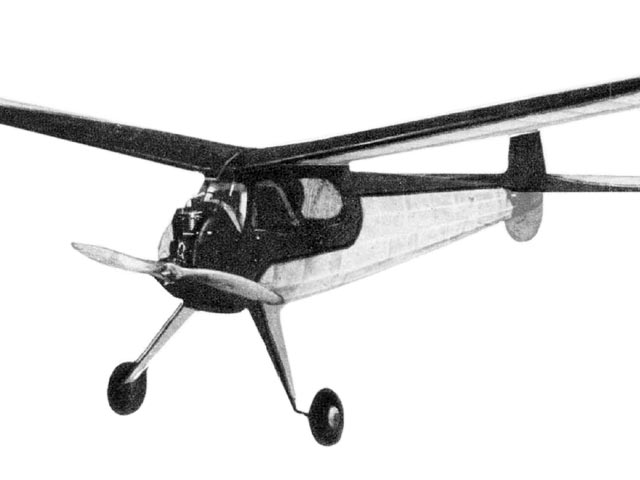