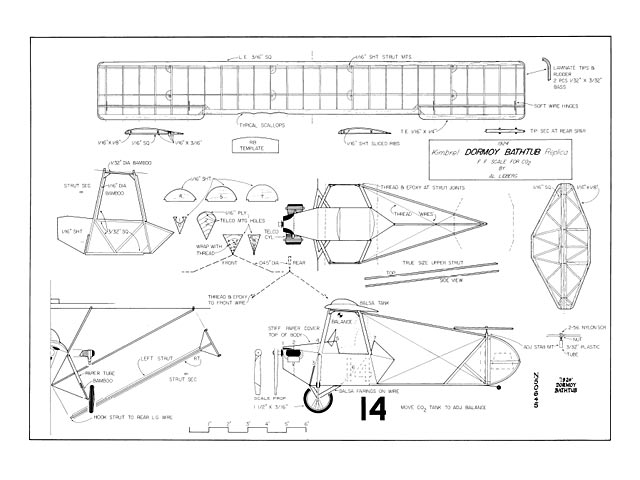 Most people wonder if the Dormoy Bathtub can fly at all, and are really surprised to discover that not only did it fly, it was a racing plane. In 1924, this plane, powered by a Henderson 4 motorcycle engine, flew in the National Air Races and won the Rickenbacker trophy with a non-stop flight of 140 miles. All the other entries had to make forced landings along the way, but Dormoy had worked out a special kind of cooling duct for his engine and was not troubled by the overheating problems they were experiencing.

A homebuilder named Mike Kimbrel resurrected this design a couple of years ago, working from a set of three-views published in Air Progress. The Kimbrel-Dormoy 'Bathtub' is the result, and it makes an interesting subject for CO2 power. Kimbrel chose to power his replica with a 40-hp VW engine, so those who wish to make an accurate scale model should find engine detail readily available in auto junkyards, dune buggies, home-built airplanes, etc.

The Bathtub may look a little complex in places, but if a logical order is followed, the tub will be only a little more difficult than a sport model. After all, we're talking about a high-wing monoplane with inherent simplicity and stability, and one that requires covering only about half of the body! While the real tub has numerous rigging and control wires, the mod-el only requires three rigging lines; two lines go from the bot-tom of the tail post up to each rear center wing strut, and one goes from the rear bottom of the body tub up to the top of the tail post. These thread lines provide some rigidity to the tail post and rudder, and will make flying adjustments more consistent.

CONSTRUCTION: Let's begin construction with the wing because it will be needed later on as a jig for assembly of the body. Curved outlines for the rudder and wing tips are made from laminated strips. Use three layers of vu" balsa strips or two layers of 1/32 basswood. Make a template of cardboard to the shape of the inside of each piece. Soak the strips in hot water for a few minutes, dry them off, and put a thin layer of Titebond on the facing edges. Pin the laminated strips around the templates..." 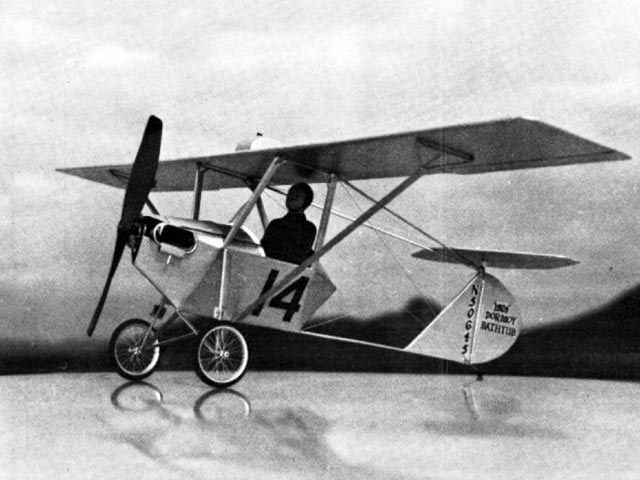 What a delightful chicken coop! Is that a stabilator at the back or an ironing board someone forgot there? :-) OZ contains several reincarnations of this design, and they all shout to be printed full size for a delightfully breezy micro-light! Failing that, here's a beautiful plan :-)
Miguel Morao - 14/08/2019
Add a comment