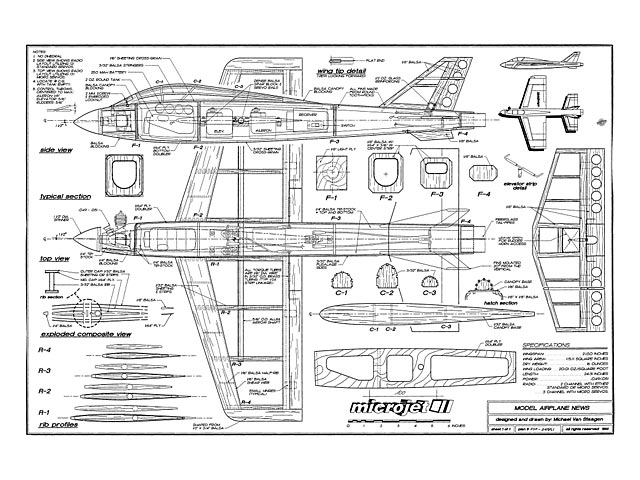 Quote: "In 1987, I visited a friend at my school's aerospace engineering lab during the final days of a .60-size, senior-design construction project. I noticed that they were creating a rather large model and a rather large pile of scraps. Never one to let an opportunity pass by, I acquired the seemingly useless balsa to use in my next project. As a student of architecture, I have always been fascinated with the 'less is more' principle. Unfortunately, this also happens to be my wallet's favorite principle. With the dreams of a new kit behind me, I took inventory of my modeling supplies and ended up with a 7-channel radio sporting full-size radio gear; an old, but well-running, Cox TD .049; and a lot of junk in the hardware drawer, covering and scrap-balsa boxes. I now faced the familiar problem of converting these components into a fierce, screaming, wild and exhilarating model airplane for about 20 bucks - yeah, right!

THE MICROJET: I began by laying the components on the table. First came the engine, then the 2-ounce tank and the battery pack, a couple of servos, the receiver and the switch. Now, about that plane: what if I scaled that screaming jet down to a size that would simply encompass the needed components? Could I do that? I ended up with Micro-jet I - a tiny, 20-inch-long plane with a 16-inch wingspan and a dry weight of 16 ounces.

The first flight was most embarrassing; the plane was barely controllable. I flew it through an oak; its small size allowed it to pass most of the way through only to catch the very last branch, and that sent it spinning in pieces to the ground. Additional flights and investigation into the design revealed a few design problems. The 31.37 oz/sq ft wing loading was too high, and the sharp, knife-like leading edges on all flying surfaces caused the air to prematurely separate at high speed and create a stick-jamming, turf-snatching situation, if you know what I mean.

A couple of years went by, and it was time to try this design again. The results were Microjet II. I enlarged the wing area to reduce the loading to 20 ounces per square foot, and I thinned the wing to a minimum dimension by incorporating an aluminum arrow shaft for the spar. I then re-sized the tail feathers to balance everything out. The new version is about 30 percent larger, yet it still weighs in at 16 ounces dry. It uses two standard servos, or three microservos, a 7-channel receiver and a 250mAh battery.

Fuselage Construction: Begin by cutting the fuselage sides out of 3/32-inch-thick balsa, leaving an extra 1/4 inch of length at the firewall for the future alignment and trimming. Mark the hole for the aluminum spar, but do not cut it out at this time. Make the 1/64 plywood doublers next. Cut out all the holes, except the one for the spar. Once the fuselage and wings are complete, make the spar holes. Laminate the doublers to the fuselage sides with thick CA. Then glue 1/4-inch triangular balsa stock to the top and bottom edges of the fuselage sides, and stay even with the fuselage edges as shown on the plan in the 'typical section.'

Cut out the fuselage bulkheads, orienting the grain as shown on the plan. F-1 is made of 1/8 lite-ply, and the rest of the formers are of 1/4 in balsa. Make several 3/16 strips of 1/4 in lite-ply, and cut across the grain so they can be easily bent. Glue these strips to the inside edge of the holes in F-2 and F-3. Now is a good time to make sure that your tank will fit through the finished hole in F-2. The hole is designed around a 2-ounce, round Sullivan tank.

Begin joining the bulkheads to the right fuselage side; start with F-2, followed by F-3 and F-4. Tack F-1 to the right fuse side with a drop of CA, and remember to position it 1-1/2 degrees downward as shown on the plan. Next, join the bulkheads to the left fuselage side in the same order, and make sure that everything is square with the plans. Before gluing F-1, hold the front of the fuse with a rubber band to pull the sides together. Now align F-1 to the top and side views on the plans, and glue it into place with thin CA. F-1 should provide the engine with 1-1/2 degrees of down thrust and side thrust. Sand the fuse sides flush with F-1, then gently sand the top and bottom, squaring and smoothing the assembly.

Sheet the bottom of the fuse with 3/32-inch-thick balsa (cross-grain), and leave the rear hatch open. Tack the hatch in place until the final sanding has been completed. Install the triangular balsa stock on the sides and bottom of the firewall. Cut a 1/64-inch-thick, lite-ply bottom doubler that's just big enough to fit between F1 and F-2 (within the edges of the tri-stock). Glue the doubler into place with thick CA.

Using the centerlines shown on the plan, temporarily attach the engine mount and the engine to the firewall. Draw the inside boundaries of the mount on the fire-wall, and route the fuel tubing through the firewall. Once the mounting screws have been removed, affix the blind nuts with CA..."

Note photo of completed Microjet II model (by strictlyscale) was found online at https://www.rcgroups.com/forums/showthread.php?1035967-Microjet-II-by-Michael-Van-Staagen also worth a look for some in-flight video. 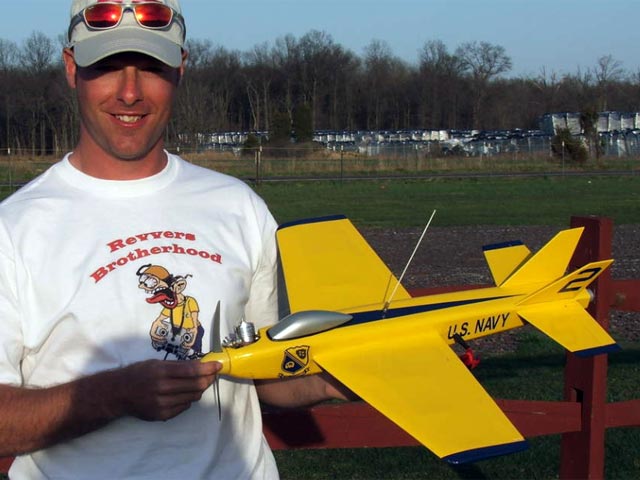