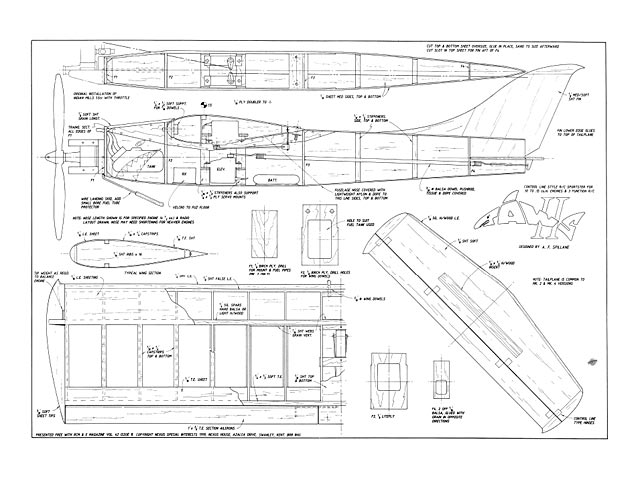 Quote: "Basic though it may be, Tony Spillane's 'Jaws' has more to offer than meets the eye.

The JAWS family is a direct result of various experiments in model aircraft design after I was so pleased with the performance of the original, JAWS-1.

JAWS-1 was designed to capture some good old-fashioned nostalgia! Schoolboy sized model (easy to get on and off the bus!), diesel power, control line type construction, Keil Kraft C/L type wing tips, frantic Sharkface (oz4416) type performance, it's all there! Using modern lightweight radio equipment meant that dihedral was not required, ailerons could be used, as could throttle control though the latter is mainly to save the walk when landing! Keeping the weight down is a priority, though the construction used has shown itself to be very tough as well. Speaking of which, it has just had its first mid-air collision and didn't even get a scratch - the other model wasn't so lucky!

Having built and successfully flown #1, I was keen to build another but wanted to do something slightly different. JAWS-2 used a more modern wing construction, with sheeted leading and trailing edges, cap strips and film covering. Originally, it was powered by the lovely G-Mark twin, and boy did it go! Unfortunately, the G-Mark 'threw a rod' and got replaced with the equally effective Tee Dee 09.

POCKET ROCKET: With the power thing starting to take a grip the next development resulted in the building of JAWS-3. I had by chance, obtained an MDS 15 with tuned pipe, and experimented with fitting a throttle. As long as the nitro level was high, it went like the clappers, with lovely throttling. JAWS-3 was the ultimate 'hooligan machine', with a thinner wing section, sweep-back and a multi-coloured fluorescent paint scheme to give a sporting chance of keeping up with it for the duration of a flight!

I couldn't fly it on full throttle for too long, but it was great fun to see it accelerate from half throttle, particularly going into enormous loops! Having said that the wing loading punished half-hearted hand launches with flick quarter rolls!

With the hooligan phase over, the socially conscious era dawned, with JAWS-4, This was to be an electric powered version; quiet, compact, and easy to fly - all that woolly jumper stuff. Mind you, I was still reeking of 30% nitro, so I wasn't going to let 'electric' mean 'no performance'. From the weight analyses of the previous JAWS, I knew I wanted a certain wing loading, yet felt that a single Speed 400 would not give me the go I wanted. Suddenly, the idea of a twin seemed exciting, and an electric twin is so hassle-free to fly! The sums showed that I needed a little more wing area whilst a flat bottom wing section would help carry the weight with less drag. Well, go it certainly does - probably as fast if not faster than JAWS-1, which in turn is no slow-coach. It really does feel like IC performance in an electric plane - its aerobatic performance is that good! It also glides fast but flat!

So, there you have it. The JAWS family grew up from an initial design, that was then developed in various directions. Having done it I can whole-heartedly recommend the development stages which I have to say were as much fun as designing the prototype - try it!

CHOOSE YOUR WEAPON: Firstly, decide what you want to make! The plane is 'modular', so you could make almost anything out of it, I've been thinking of a biplane or even a control-line version next!

Once you've made your mind up, think it through to make sure it's all compatible, I always weigh everything so that I can estimate the final weight and get the balance right without a load of lead. Once you've decided on your motor, radio, etc, and the layout of the plane, you're off. Brief building notes and points of interest are included in a separate section for those who wish to proceed beyond the reading stage.

AND FINALLY: The flying. Once you've completed the rigorous installation checks, balance the model on the spar and check the surfaces for 1/4 in travel each way. If the plane is on the portly side, ie around two pounds or more all-up weight, then don't be too lethargic in the launch or you could have some early unscheduled aerobatics!

Once underway, all versions are terrific fun to fly. The electric is almost comparable in terms of speed and will loop and roil easily from straight and level. Those with a lower wing loading result in a wider speed range and can be made to hover like a hawk in only mild headwinds.

Generally, Jaws has a good glide, the electric being fast but flat. If you need much up elevator, especially to flare out at landing, then it's too nose heavy. Finally, don't be tempted to 'beef it up' anywhere, it will only hit the ground faster!

That's it, have fun and experiment!

1. Start with the wings. The plan details the wing section for the Mk.2 and the Mk.4 (flat-bottom) as these conform to current construction techniques.

2. Fit the aileron servo mounts before sheeting the centre section, and add the paper tubes for the electric twin to feed the power cables through.

3. For the electric twin, cover the wing before adding the nacelles then adopt the following procedure: Solder the cables to the motors and fit the motors into the nacelles. Remove the film from around the contact area, feed the cables through the tubes and finally glue the nacelles to the wings. The big cooling outlet should mean that you won't have to remove them too soon!

4. The use of medium to soft 1/16 sheet for fuselage sides will come as a shock to members of the Lawn Mower Association, but trust me, it works. Cut your sides out, check the fit to the wing and then add the stiffeners including the 1/16 ply wing seat, the various vertical stiffeners (leaving a slot for the servo mounts) and the hatch area stiffeners. Saw cut 1/4 triangular section and apply around the nose on the electric version.

5. Cut out the formers and make the sides into a box. Pinch the nose and tail in, fit the transverse stiffeners and then the longitudinal top and bottom sheeting, cut oversize and sanded back afterwards.

6. For the electric version, make up the 1/8 liteply battery box (size is for a seven cell pack - I use 'lightweight' 1400 mAh) with the fancy cut-outs and fit it into the nose.

7. Keep the tail light, it will then be less inclined to meet the nose in an unscheduled arrival! With soft 1/8 sheet, I recommend the hard leading edge strip to make it more ding-resistant on landings. The 1/8 x 1/2 strip is for stiffening. Try using the control-line hinge method and cover it in one piece - easier than slicing through the sheet for plastic hinges, I think you'll find!

9. Finally, use a bright colour scheme as all of these planes can disappear fairly quickly!" 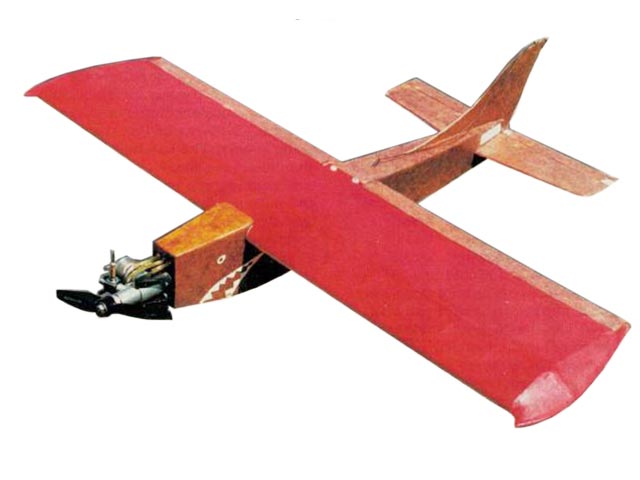