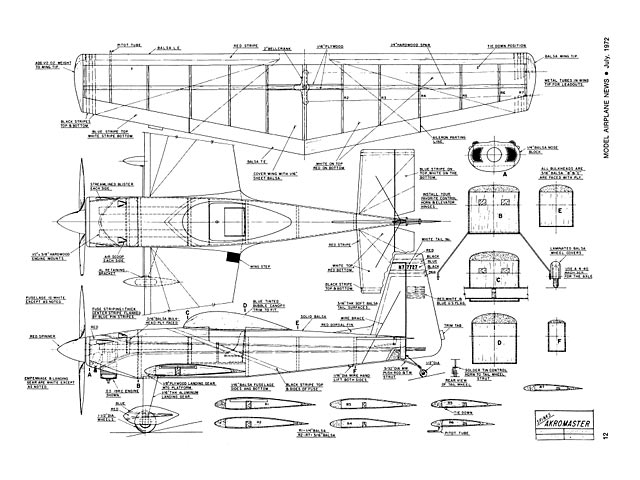 Quote: "Looking for the scale subject that has a little extra pizazz to impress the judges and also impress your fellow Control Line Stunters? Then this Spinks aerobatic plane is the answer! Akromaster, by Phil Boretto.

If you're like most scale modelers that I know, you spend your free time (that's the time not spent building, flying or messing around with models) thumbing through various aircraft magazines looking for scale model subjects or hoping to find out more information about some that you have already started.

It was during one of these free(?) periods that I was relaxing with a copy of the December 1968 Air Progress. Starting from the back as I always do, it wasn't till the end of the book, which is really the front, that my eyes caught my first glimpse of the Spinks Akromaster. I immediately wondered what a model airplane was doing in Air Progress.

Now the smarter and smaller part of my cranium told me this couldn't be, but reading the small print under the picture proved I was wrong. 'The Spinks Akromaster,' the caption said. Well, you could have fooled me. I thought it was a Zilch or something. It sure was a pretty little bird.

I decided to cast a closer look at this multi-striped ballerina. It definitely was an eye-pleaser with its varying-width stripes, sun-burst wings, smooth spinner and wheel pants. My other eye also noticed the hard-to-duplicate features that were missing: sliding canopy, retracting landing gear, flaps, etc. This was a welcome sight as I'm always look-ing for a simple scale subject.

Also, this airplane had one big plus going for it. I knew I had never seen or heard of anyone building a model of this one before. I had always wanted to build the first model of a plane that no one else ever had - here was my chance.

With my mind made up, I shot a let-ter off to Air Progress to get the address of the company that built them. Within a week I was writing to the Spinks Aircraft Corp in Fort Worth, Texas, seeking the all-important three-views and every bit of information that I could get from them concerning the Akromaster.

Reggie Ward, public relations director of the Spinks Aircraft Corp, dampened my initial enthusiasm by telling me that no three-views existed on the Akromaster because it was a one-of-a-kind aircraft and was undergoing constant modifications. But he did enclose five pictures of the Akromaster in flight and three of it on the ground.

Well, I had never been too great at drawing my own plans, but I figured I had to start sometime and this was it. Armed with compass, dividers, ruler, T-square and a magnifying glass, I poured over those pictures as if they were Raquel Welch instead of the Akromaster. A week later I gazed proudly at a maze of scribbled lines, erasures and a jillion footnotes. I have to admit they looked like the face that only a mother could love, but I was proud of them.

They incorporated movable rudder, movable control stick, movable ailerons, spring-loaded tail wheel, hidden fuel tank lines and a little goodie - a working throttle in the cockpit that was linked to the engine throttle.

So, with my questionable drawings, I started to gather supplies and cut the wood for an Akromaster. Since my scale building ability does not match my enthusiasm for this phase of the hobby, you will find the building instructions simple and straightforward. If you've decided to build one, then let's proceed.

CONSTRUCTION: If you're looking for the 'glue-part-A-to-part-B' type of instructions, you won't find them here. I very seldom follow building article instructions and I doubt that anyone else does. The plans are self-explanatory. If you've ever built a Ringmaster S-1 (oz3501) or Flite Streak (oz2652), then you can build the Akromaster.

I will give you some general hints and tell you some of the methods I used. Other than that, good luck.

The fuselage is a simple box. Build it light in the rear as this model has a long tail moment, and extra weight in the tail will kill you.

The wing is built just like a Ringmaster's except that it is planked and the ailerons are cut out. The real Akromaster had five degrees of dihedral.

Rudder and elevator are simple but keep light. Real Akromaster had a cantilevered elevator on the right side only.

The canopy is a cut-down Dubro that is tinted light blue. Neat, clean rigging for the tail is done by inserting 1/16 od aluminum tubing and sanding flush with surfaces. After model is completed, rigging wire is inserted. This way the wire never cuts into the model.

Landing gear must be solid. Don't skimp here. Build the wheel pants strong; they must take a beating. Aluminum wheel hub covers on pants are .007 made from print-ing offset plates..." 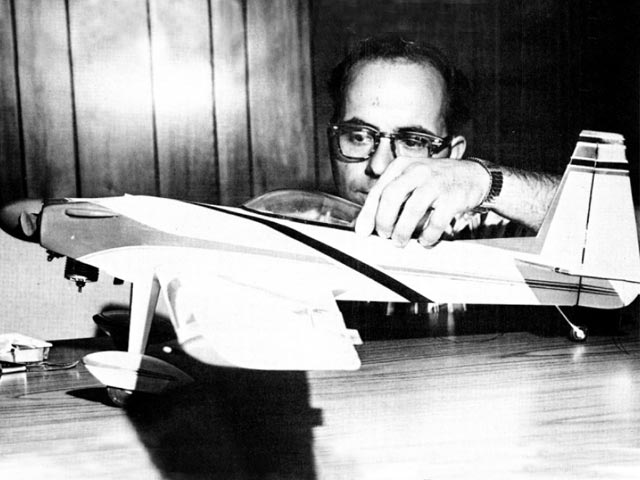