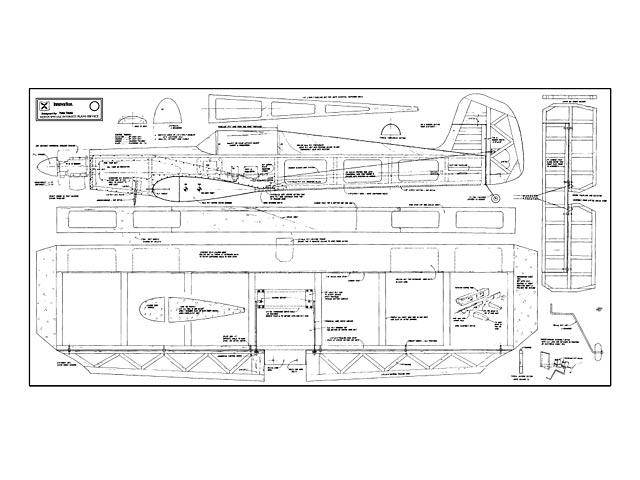 Quote: "With this 59 in wingspan stunter, Peter Tindall proves that not all fun-flyers have to look the same.

When I read the RCM&E article about Christophe Paysant La Roux flying indoors with a large model, my interest was aroused. However, being a firm believer that model aircraft should look something like their full-size counterparts, I thought that the appearance of such a model would be enhanced if it looked more scale.

So what type would satisfy my desire? Thoughts of Christophe, being French, pointed me towards the CAPs but the Dalotel seemed much more practical and straightforward.

Christophe's model weighs in at just 2kg for a Super Tigre 45, so some rough sketches and calculations were made and various ideas kicked around. The perimeters were set and the design adjusted mentally to suit:

The ST 51 was chosen as the preferred power plant as the SF was occupied and the power/weight ratio was better than the ageing ST46. The weight could only be partly determined and would eventually become exactly 2.5 kg (before an engine change). The ability to fly slowly would be paramount and partly achieved by low pitch props and the rest by drag, induced by a very thick wing and square leading/trailing edges to the tailplane and fin.

The ability to turn extremely tight (as per control line aerobatics) without the use of coupled flaps and elevators would be achieved by having a long moment arm and large moving surfaces. The downside would be the weight behind the centre of gravity but seeing as this was going to be a light model, this wouldn't be a problem and nose length would be determined almost on completion so that weight wouldn't need to be added (hopefully!).

Stability beyond normal requirements for extreme manoeuvres close to the ground is almost a contradiction in terms and would eventually have to be obtained using transmitter mixing rather than being determined by CC location. To build cheap would mean to build from the scrap box so a visit to the workshop and a forage for half an hour dictated the main construction.

On the board: Outline sketches were made, followed by a rough working drawing which was good enough to build from. The model was designed to suit the only fixed item to hand, being a cowling from an FAI aerobatic model. The wing leading edge was cut from foam and hollowed out at the tip sections. A 1/8 in balsa spar, full depth, was added and the centre section reinforced with carbon fibre. The whole section was veneered and the spar then hollowed at the tips to match the hollow in the foam. The rear section of the wing was cut and veneered before being.sliced into eight ribs on a band saw. These were then stuck to the main spar which was resting on the bench in its cut-outs. The trailing edge was added, followed by the 1mm ply centre section covering. The tips were then stuck on as a block and the bow fixed at one end and followed around the tip shape, then final sanded. No veneer was. added to the tips which were eventually covered, along with the rest of the model, with Profilm.

The tailplane, elevator fin and rudder were then bUilt up. The tail parts were quickly built as all timber is the same cross section and all edges, except the hinge faces, are sanded square.

The fuselage is very straightforward. The sides and bottom are in one piece, hollowed out as shown. Balsa strip is run along all corners and cross members added to complete the sub frame. The front section is soft block, hollowed out, and the rear section is 1mm ply, wrapped around.

The model started life with a thin ply canopy but this has since been replaced with a greenhouse cockpit. The undercarriage is mounted with three cable ties - easily available and very successful! The rudder is close looped but everything else is direct. As this was going to be aerobatic in the extreme, as much movement as possible on all surfaces was built in..." 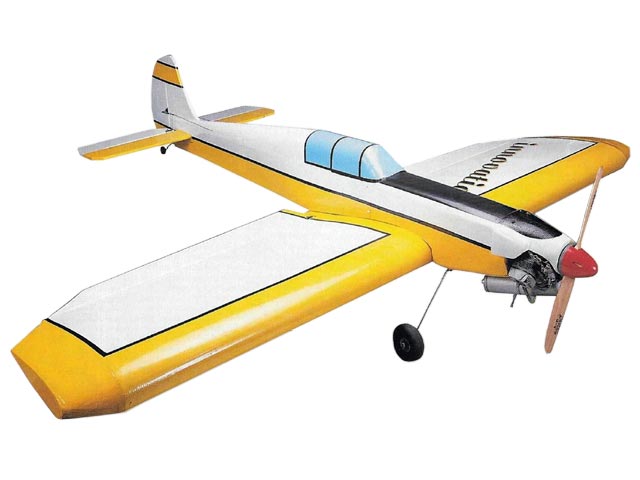