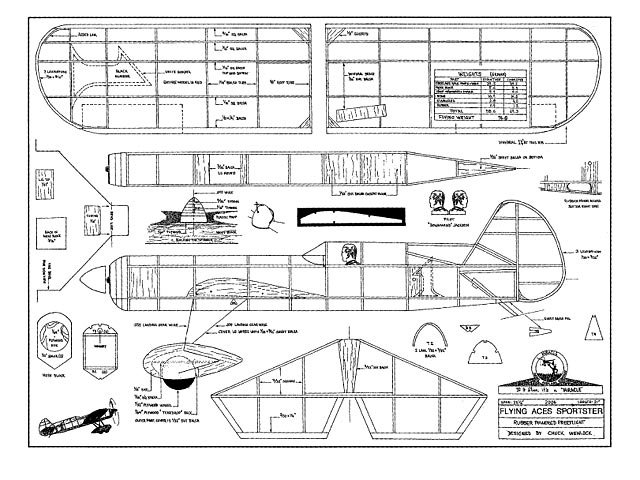 Quote: "The May-June 2006, issue of the Flying Aces Club News had a marvelous cover comosed by Bob Rogers that showed six airplanes in flight. One plane caught my eye immediately. It had the sleek lines of a racer that just cried out to be a rubber powered free flight. I did not know its name; in fact, I did not know the name of any of the six airplanes. No matter, I had to build that racer.

I based my model entirely on the drawing from the cover of the FAC News. To reproduce the structure as precisely as possible, I reversed the image and had it enlarged 300 percent to the size you see on the plan. Construction went well. I was about to cover the model when curiosity got the better of me. I wrote to Bob Rogers to ask about the planes on the newsletter cover he had crreated.

Bob gave me quite a surprise with his responce. I had convinced myself that all the airplanes were merely drawings. Not so. Only two were from Zack Mosley's comic strip 'Smilin Jack', while three were from model airplane plans that had appeared in FLYING ACES magazine in the 1930s and the sixth had been a Comet kit long ago. Bob graciously provided me with a color photo of a racer that had been built from the FLYING ACEs plan and another photograph showing a model made from the Comet kit.

Now I know the name of that beautiful airplane: the Flying Aces Sportster. The photo shows a carefully crafted model done in red Japanese tissue. How fortunate it was that I had not yet covered my model. Red suits the speedy looking Sportster. As a note of whimsy related to the two planes on the cover that were created by Zack Mosley, I chose to put 'Downwind' Jackson, Smilin' Jack's buddy, in the cockpit.

To the bench. Landing gear: The landing gear has to be made before the fuselage can be finished. Make it first. Start bending the .055 wire at one axle and work your way around to the other..." 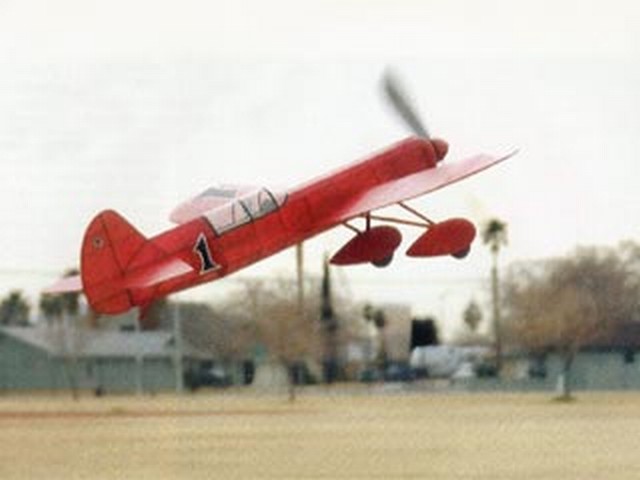