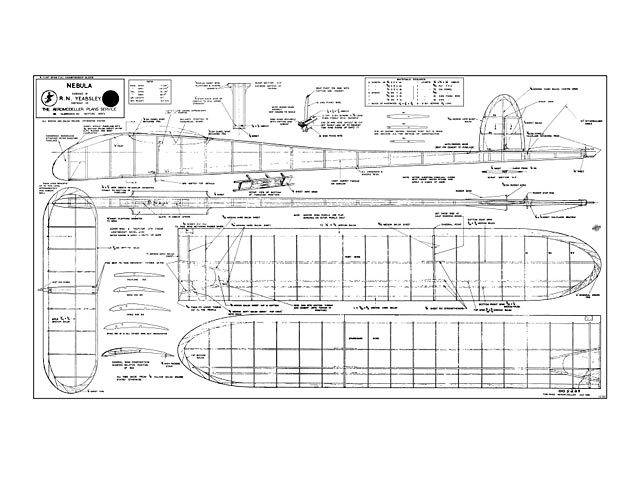 Quote: "Voted by general consent to be best finished A/2 at the team trials, this is one of the very few British glider designs for which a still air average of 2:30 can be claimed from 100 metre towline. Nebula, by Roy Yeabsley.

AN ACCIDENT can be said to have influenced this outstanding A/2 design, for it was evolved around the Danish drooped trailing edge idea. Ove Christiansen discovered the advantages of "flap effect" quite by accident through a constructional warp, and as reported in the December, 1953, issue, Hans Hansen used Borge Hansen's section with the droop incorporated to win the World Glider Championships. After correspondence with Borge on this flap idea, Roy Yeabsley made an A/2 with an adjustable trailing edge to find the best droop angle and after a considerable period of flying he designed his own airfoil with built-in droop and applied it to Nebula.

The results speak for themselves:

Here then is a contest glider of very top class, one that can be built easily, and if built carefully with a good finish, can match the best; but if made without due care and attention, all purpose is lost, and performance cannot be expected to be better than that of any other 'average' design. Being a relatively simple structure, full building instructions would be rather superfluous, but special attention should be paid to the following stages of assembly in order that no undue difficulty should arise.

Wings: are two-part for easier transport, retained by tongues in 1/16 sheet boxes, firmly bound with button thread and cemented. Make a tongue a 'free' fit as the boxes close in with use. Root ribs Nos.1-4 are not undercambered until boxes are fitted and wing finished. Build centre panels first, attach tips afterwards. Make TE slots for rib exactly 1/8 in deep and correct width. Excess cement used here only causes a warp. Front of the TE is packed up with a 1/8 sq balsa strip to conform with the airfoil section, otherwise all assembly is in the normal sequence of Leading Edge, TE, ribs, then spars. Cover with Lightweight Modelspan and while pinned down to board, give one coat of thin dope (70% thinners) on both surfaces. Two normal coats follow.

Fuselage: is a built-up structure with 1/16th sheet covering. Add auto rudder detail and some "fixed ballast" made from old flattened cement tubes before putting on the sheet, top and bottom being covered first to prevent lateral distortion. Last thing on is the noseblock. Cover over-all, including the simple tail unit, with Lightweight Modelspan water-shrunk and given three coats of dope.

Balance point is 50% of the root chord, and the hook position on plan is as it should be. If your Nebula weaves one way only, the hook is too far back. Weaving both ways indicates a forward hook, and the intermediate 'straight' tow position will be found midway between these symptoms. All flight adjustment to the model should be carried out with rudder trim and tailplane trailing edge packing."

Note supplement alternate plan scan (thanks to algy2) is unscaled and has hatched background. As printed in the pages of Aeromodeller, 1954. 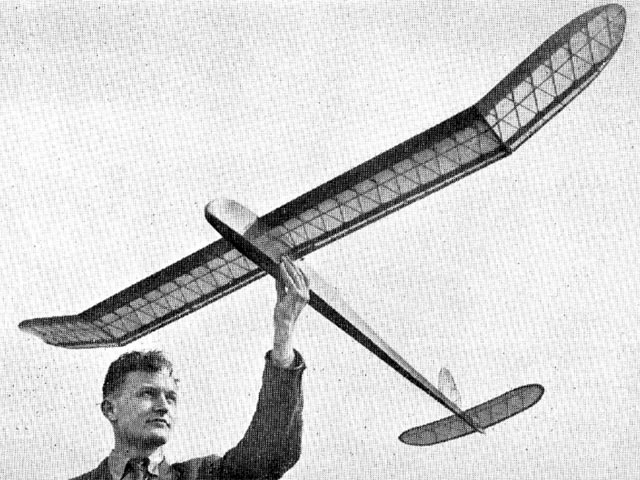