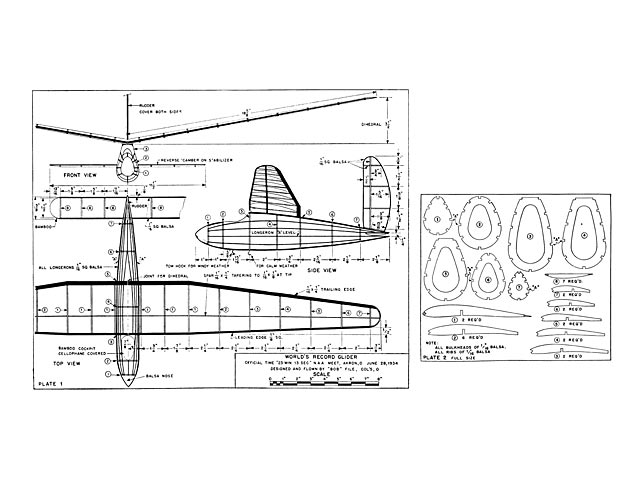 World Record Glider. Towline glider model. From MAN Feb 1935. This is the first, the original, version of this much-copied design.

Quote: "How this glider set a World's record, and complete instructions that will enable you to build it.

HERE are the plans for an easily constructed soaring glider that will give recod-breaking flights consistently by carefully checking and following instructions, step by step.

In my estimation, no rubber-powered model can give you the thrill of a powerless glider riding the thermal air currents rind rising almost magically to many times its original altitude. In the course of several years of flying all types of model gliders, I have found this type to be the most consistent flyer as well as the most successful.

At the National Model Meet in Akron, this model made a new world's record of 23 minutes, 13 seconds by flying out of the judges' sight. The contest was held at the Municipal airport and I had noticed the only rising air currents were on the windward side of the huge Zepp's dock. In order to get these currents, the model would have to be towed close to the dock. However, there were two disadvantages in doing this. One was a limit of 100 feet on the towline and the other the weight rule. The model was towed up to about 80 feet and released where it was soon carried nearer the dock. At this point, as I had figured, the model started circling and rising fast and it was soon over the top of the dock but still in an upward current until it was at an altitude of about 500 feet. From there it started cross country to the far edge of the airport (about a mile and a half), where it struck another thermal current from a ridge. That was all it needed, for it it soon disappeared in the clouds.

The contributing factors on a flight like this are perfect balance, rising air currents and enough dihedral to keep the glider from slipping and losing altitude on the turns. To get record-breaking flights, select a locality preferably hilly, as there are many rising currents from hills on a hot day. Use as much towline as possible (No.50 thread), for the longer the towline the greater altitude you can get. I have often used 1,000 feet and it is possible to get 700 feet altitude. allowing for the slack in the line.

Now for the construction!

Fuselage: First, lay a thin paper over the bulkhead drawings, trace and cut out, laying the patterns directly on the wood. The easiest way to assemble this fuselage is by taking two pieces of 1/16 square balsa, the length of the fuselage, lay on the side view drawing and work on them the position of each bulkhead along longeron A. Bulkhead No.3 should be glued in the proper slot by both longerons A. Then add bulkhead No.4 and check on the trueness by the marks on these longerons..."

Note this is not a full size plan. This is a scan of the drawings as they first appeared when printed in the pages of MAN, Feb 1935. The formers were printed fullsize, but the layout drawing was intended to be enlarged using pencil and paper.

Note for more on the story of this design and the many later copies, see supplementary article_2 (below) written by Pit, from DBHL Clarion, and telling the full story. 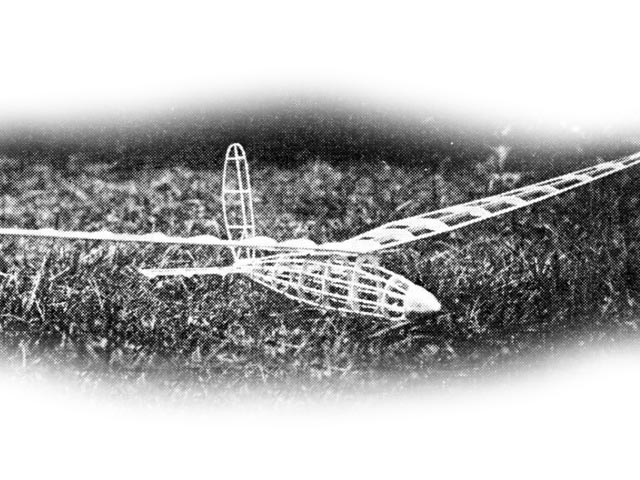 Have added this 1935 plan to the listing mainly just so that we have a page to link to, from all the other later copies of it. Many thanks to Pit for help with this one.
SteveWMD - 09/08/2019
Add a comment