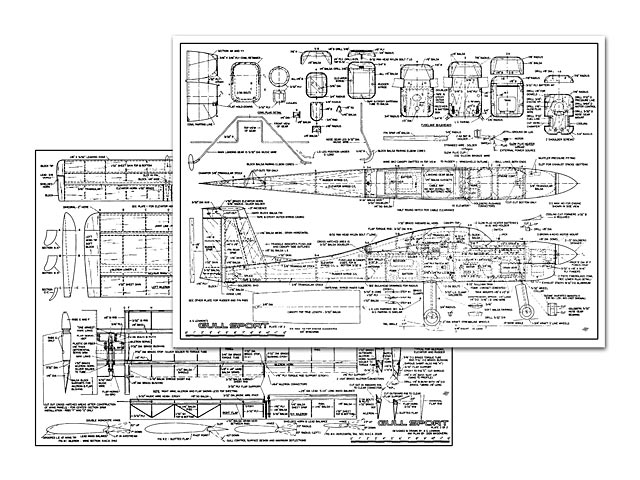 Quote: "THIS MINIATURE aircraft was designed to the principles published in 'Aerodynamics' in Model Airplane News. It is an exciting model airplane to fly, with a surprising speed range from about 90 mph to a loiter of 20 mph with flaps fully deployed. Oddly enough, at the flying field the Gull has attracted more interest than its younger sister the Crane (MAN, March and April 1983 issues). I feel this is due to more conventional controls and simpler construction.

Complete specifications on the Gull are tabulated above [see article p2] to provide those of you interested in designing your own with some guidance.

Your attention is directed to the performance figures at the end of the tabulation. Full-stall landings are easily executed without wing tip stall, due to both a drooped leading edge ahead of the ailerons and aileron differential. Maximum down aileron deflection is 7°.

ENGINE STARTING: I like inverted engines. The high thrust line aids longitudinal stability, propeller clearance is greater, and they can be cowled for low drag. However, they can be difficult to start. Even worse, if you use an electric starter you run the ever-present risk of hydraulic lock from fuel accumulating between piston and cylinder head that can seriously damage your engine.

Because of this I invert the model on my flight box, after filling the fuel tank with the model right-side up, using the fuel line disconnected from the carburetor. When the tank is full, any excess runs out the exhaust stacks via the muffler pressure line. However, in the inverted position the tank liquid level is higher than the Tatone manifold and the latter could fill up to the engine exhaust level, which would make staring virtually impossible and could lead to fire.

To overcome this I use a ball check valve. This valve is easily made from an aluminum, two-piece, threaded fuel line filter and a A-inch diameter ball bearing. Unthread the filter, put in the ball, and reassemble. Install the unit in your manifold pressure line with the ball resting on the filter screen. When the model is inverted, the ball will drop into the un-screened half of the filter and seal it. When your engine starts, muffler pressure and fuel suction at the carburetor will combine to lift the ball and allow air to enter the tank.

Prime the engine with the cowling off. Reinstall the cowl and connect your glow-plug to the external power source via the jack. Start the engine, disconnect the external battery, switch on the on-board glowplug battery circuit, and away you go! I had only one engine failure in the past year. For the first flight of the day I normally remove the glowplug just before starting the engine and blow the gunk out of it. Fuel and oil collect in the glowplug cavity in the inverted position, making starting difficult.

Use 9/32-inch od aluminum tube extensions held in the exhaust stubs on the manifold with silicone sealant. I also use this to seal the joints between engine, manifold and manifold halves. Silicone withstands exhaust heat and seals well.

CONSTRUCTION: The construction and assembly details of the Crane (MAN, April 1983 issue) are applicable to the Gull and will not be repeated here. Despite the apparent similarity of these two miniature aircraft, there are very few components that are interchangeable, except purchased items such as wheels.

FLYING. Here the fun begins. This model has no vices. It's docile yet very responsive to control input. It has performed every maneuver in the book except snap rolls. With the powerful elevator and rudder, spins are no problem and recovery is prompt on control neutralizing. Inverted and knife-edge flights are easily performed.

The wing will stall flaps down and in ground effect at 9° angle of attack..."

Note this design seems to be essentially the same as the AG Lennon Snowy Owl (oz7415) published in RCM Jan 1989, ref RCM-1034. There are some detail differences between the two drawings, not least of which is an extended LE section outboard on the wing (NASA drooped leading edge), which appears only on the later RCM plan. 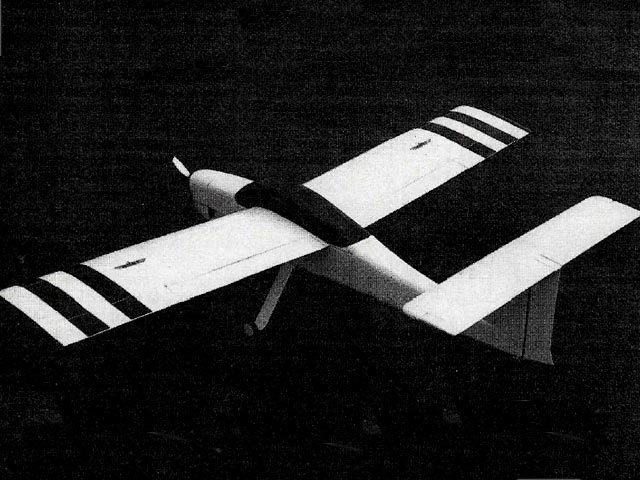 Hello, just a note regarding the author's name. This plan reads AG Lennon, but in the database there is also Andy Lennon. I think it would be better to have only one version.
Jan - 08/08/2019
Thanks, good point. Have set 'Andy' to 'AG' for now, as a quick fix.
SteveWMD - 08/08/2019
Nit picking a bit I always saw "Andy" as his published name, as in one of his books I happen to have. A remarkable chap, more about him in his obituary in www.modelaircraft.org/sites/default/files/files/LennonAndy.pdf
Miguel Morao - 08/08/2019
Add a comment