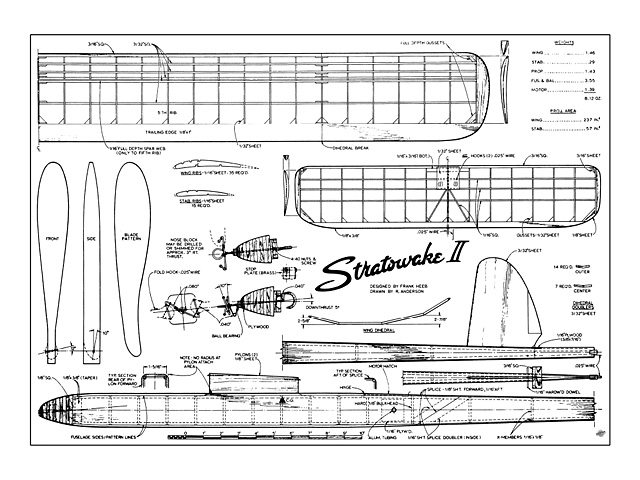 Quote: "Continuing the famous Strato series, this one, second in a line of Wakefields, ran up a series of good wins climaxed by taking first at the '70 Nats - it's an outstanding winner! Stratowake II, by Frank Heeb.

As the name implies, Stratowake II is one of a series of Wakefields that I've been flying for several years. Number II is a true growth version and is longer, leaner and larger than the pre-vious designs. This one model is my most consistent and luckiest for having sur-vived four Nationals with 21 official flights with no damage or loss. The mod-el has DT'ed on trees, a trash dump, Navy barracks roof, corn fields, runways and other undesirable landing spots with no more damage than a few nicks and small tissue holes.

Stratowake II's first contest was the 1966 Chicago Nats where a five flight total was just a few seconds less than fifth place - not good enough. At the 1968 Olathe, Kansas Nats, in a seven flight marathon during a 98 degree heat wave and 15 knot winds, I placed second behind my old friend and best competitor, Rol Anderson. No excuses for the 1969 Willow Grove Nats; two maxes and two average flights put me out of the running. The 1970 Chicago Nats, held again at Glenview NAS, had very high winds that blew the short way across the field after a heavy rain the night be-fore. The winds, so strong that hardly anyone dared fly before noon, hadn't diminished a bit by 1 pm, but we decided to fly rather than hold off and have to fight time later on. My first flight was poor because I heaved the model almost straight up, as I usually do, and the wind blew it over on its back. It rolled on up into its natural climb pattern, but the power burst was expended by then and it didn't climb very high. Shallow angle launches made the difference - the next three flights were maxes and the fifth was 2:52 with a short fuse. This put me comfortably in first place. I cut my fuses to about 2-1/2 minutes to help retrieval but three flights went beyond the field limits. I am indebted to contest expert Andy George and to my son, Gary, for retrieval aid and to old rubber pro Claude Curry for his accurate thermal forecasting - a tough job in those conditions.

DESIGN: SW II is based on my design philosophy of a simplified planform low drag airframe. The wing section is the Benedek B-6356-b airfoil with a slightly thickened trailing edge blended to the undercamber with the top camber unchanged. Two spars equally spaced between the LE and the high point spar induce the turbulent boundary layer, with drag reduction, that permits a higher than normal glide airspeed. At the higher climb airspeeds, however, the wing provides so much lift that down-thrust is necessary, but drag is still low because the climb is quite fast. Apparent-ly these European sections really are some improvement over our sections.

The stab section is a modification of Bill Schieman's 'Dove' A-2 glider stab section. The small area stab, 24% of the proj wing area, allows an aft CG location with two degrees angular dif-ference with the wing. This set-up provides ample longitudinal stability while overall drag is kept low.

The old fashioned sheet box fuselage is easy to build and can withstand a blown motor. The conventional prop bearing and stop mechanism are reliable, low cost..." 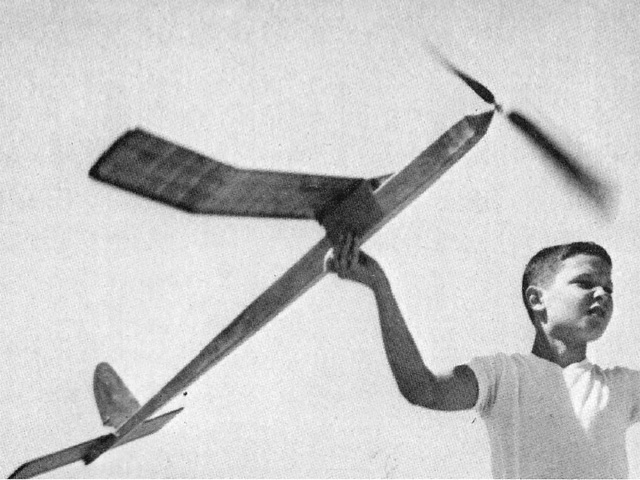