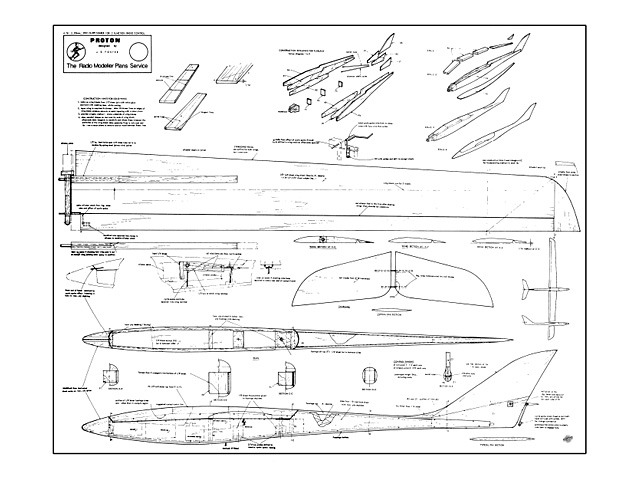 PROTON is the latest in a line of solid balsa wing soarers which incorporates the best features of Poltergeist (oz9514) and Protean (oz9701) which are existing Radio Modeller Plans, and also uses the solid balsa wing.

Proton utilises two function radio control consisting of full span ailerons and an all-flying tailplane. Because of this and the nature of its construction it is best suited to the more experienced pilot - the type who has learnt the art of gentle landings and who is able to return home after the majority of flying sessions with his (or her) models relatively damage free.

In designing Proton my requirement was for a relatively simple, light and compact soarer capable of glide performance comparable to much larger models. I wanted to be able to assemble and dismantle the new model quickly, and for it to fit into a small storage space such as the rear parcel shelf of an average family saloon. Additionally, the model was to have impressive looks, be at least moderately aerobatic and be capable of soaring in wind speeds between virtually zero and Force Six without ballasting.

To achieve the performance requirements the model had to be lightly loaded while possessing a fairly high aspect ratio wing to give a wide speed range and minimise the rate of sink in marginal lift. Use of a high aspect ratio wing in small models is, however, likely to be fraught due to the small wing chord meeting the critical Reynolds number resulting in poor aerofoil performance. This problem was reduced by employing a thin, flat bottomed wing section with a sharp leading edge to induce turbulent air flow.

The use of full span ailerons meant that they could be trimmed to provide a flap effect reflexed in strong wind or turbulent conditions to improve penetration and stability or drooped in light wind conditions to increase wing lift coefficient and reduce sink rate.

On its first outing in calm conditions it was very gratifying to find Proton achieving similar height off the slope as Wildfleckens and the like. No, the wings weren't filled with helium - once again a thin section solid balsa wing design was working its magic. Subsequent flying sessions were not as satisfactory as the first one. A number of problems such as snap stalls in turbulent air, aileron flutter at high speed and a wing shearing off in a Force Six were encountered. These problems all assisted the development of the design which, if built in accordance with the RM plan, should prove virtually bug free.

Construction: Proton's construction will prove simple to the experienced modeller, particularly the construction of the solid balsa wing which promotes accurate and rapid assembly and unbeatable repairability. (Refer to the May '79 edition of RM for a detailed explanation of the production of a pair of solid balsa wings from solid sheet. Photocopies are available from RM).

Cut out the wing blanks using soft 12mm (1/2 in) balsa sheet and assemble each panel using white PVA glue, holding the sheets together with masking tape. Produce the triangular flat area on the underside of each wingtip to obtain the required amount of washout necessary to limit tip stalling when flying slowly. Proceed with shaping using a razor plane and subsequently a sanding block to form the required taper from root to tip. Afterwards shape the wings to the required aerofoil section. Now cut out the ailerons from the wing panels and shape the ailerons and wing rear edge to provide for aileron movement.

Fabricate the wire and tube wing joiner and assemble into the hard balsa wing spars, For maximum accuracy it is best to make the two wing spars and joining tubes each from one piece of material, cutting the assembly in half only after the spar has been notched and glued into the wing panels butted root to root on the building board..." 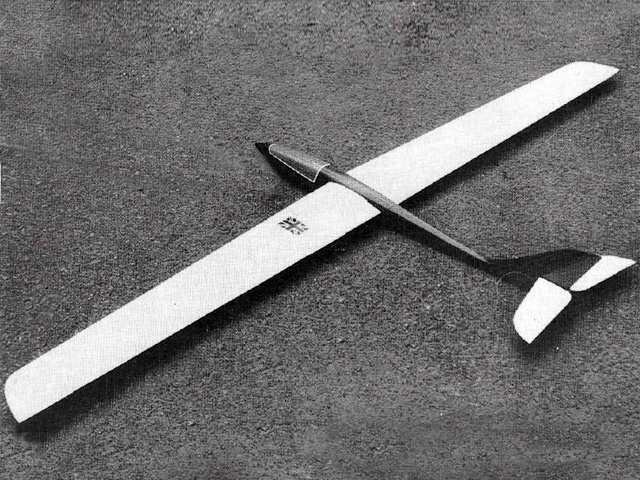