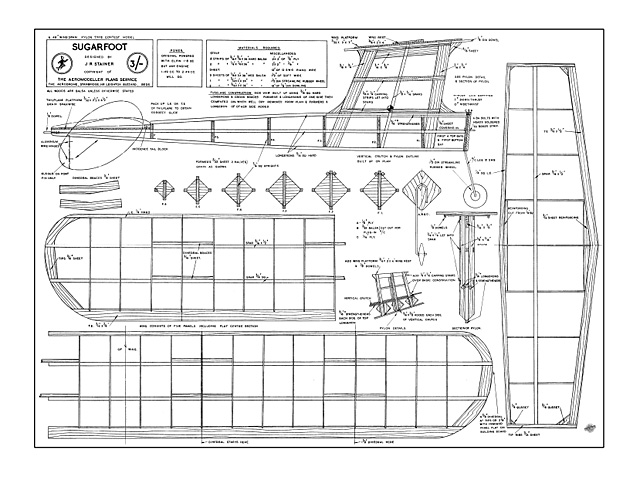 Quote: "SUGARFOOT is the result of several experimental models, designed and flown during 1948, to determine the best layout for a high-performance, free-flight contest model. The experiments proved that the powered sailplane was not only safest, but was, far and away, the most consistent high performer. The combination of pylon layout and large, powerful lifting tailplane, gave a fast climb and rapid recovery when the engine cut, and the glide prompted several people to suggest that a tow-hook be fixed to the fuselage and the model used as a sailplane, instead!

The first Sugarfoot won the East Kent Area Rally in April 1949, since then Sugar 'feet' have proved consistent winners in local contests. 8th place, with a flight of 131 secs, was gained in the Coronation Cup, on a 9 sec motor run. The average still-air ratio of this model is about 12:1, and 8 min 35 secs was made on an 11 sec motor run, the model being found 10 miles away.

Construction is perfectly straightforward, but a few suggestions might prove useful.

Fuselage: is built up on a vertical crutch, top and bottom longerons being pinned down to the plan. These are followed, in order, by the 3/16 x 3/16 uprights, 3/16 3/4 pylon outline, half formers and longeron of the port side, after which the fuselage is removed from the plan. Formers and longeron of the starboard side are now added. 3/16 x 3/16 strengtheners to the pylon outline are next, then 3/16 x 3/8 vertical members, pylon capping strips, 3/32 x 2 x 7 in platform, 3/16 x 2 x 4 in wing-rest, front bulkhead and front planking.

Undercarriage: must be a tight fit in its box, to be certain that it will not drop out when the engine starts.

Wing: is built-up of five panels, allowing a flat centre-section and aiding stability. Make sure that the dihedral braces are glued in very firmly.

Tailplane and Fins: should be covered and doped before cementing together as an anti-warp precaution. Twin fins avoid blanketing by the pylon.

Covering: should be of a strong material such as rag or Modelspa.n tissue, given two coats of clear dope plus colour dope, to taste. It is advisable to pin down flying surfaces while the clear dope is drying.

Flying: Although no particular vices have been evident and the model may be flown safely by a comparative novice, careful trimming is very important. The following trim, used by the designer, will ensure the best possible results, and the model is easy to trim if this is done properly.

Test glide first, until a very slight stall is apparent in straight gliding flight, after which eliminate this stall with the correct amount of left rudder, to give the model a fairly tight gliding circle.

For first power flights it is a good idea to mount the prop. back to front thus reducing the thrust considerably. The model should climb almost vertically in left-hand turns. If no vicious tendencies show up under reduced power, turn the prop. around the right way and increase the power to 'full bore'.

Power flight adjustments should be made by means of thrustline alteration, only ; once the correct glide has been obtained, leave it alone. If the left power turn is too tight, give the engine right side-thrust ; conversely, give left side-thrust. Tendencies to either dive or loop are cured by up-thrust and down-thrust, respectively. These adjustments are made by inserting washers between the crankcase and the front bulkhead, on the engine bolts, or with small pieces of plywood in the same positions.

The model has been found perfectly safe, trimmed for both power and glide circles to the left, and the most rapid recovery, when the motor cuts, is ensured by this arrangement. No serious loss of height has been experienced, Sugarfoot just side-slipping out of the climb into the glide, with two stalls as the most ever seen. ROG flights are quite straightforward, despite the small monowheel undercarriage, as the model becomes airborne almost immediately.

A pop-up dethermalizer is recommended, allowing the tail to rise to an angle of 35°. Although a timer would be the safest method of operating the dethermalizer, a fuse could be used to save weight.

The best propeller will, doubtless, be found by the builder of the model, but the designer obtained excellent results with an 8 x 6 in Trupitch.

Alternative Power Units: are the Frog 180 and 160, Arden .099, Mills M.k2, Elfin 1.49, Allbon Arrow and Javelin, Reeves 1.8, and K 'Kestrel'. Alteration to the nose of the model will be necessary to keep the CG in the right place, where the engine used is lighter or heavier, to any marked degree, than the Elfin 1.8.

Weight of the completed model with engine must be over 12-1/2 oz, if being entered in FAI contests. Average weight has come out at 12-1/2 to 13 oz.

Quote: "Attached herewith is a part copy of the original printed plan of the Sugarfoot sold by Aeromodeller Plans Service that shows the wing aerofoil omitted from the reduced scale drawing accompanying the magazine article.

It has been suggested that it could be MVA 301, although that would be 10% thick. However, the section drawn has a sharp leading edge and superficially resembles Isaacson 64009. Nevertheless, at approx 6.5-30-09 and slightly reflexed it doesn't seem to be either!

I hope you have success with this nice old design. Please take note of the designer's recommendation to fly it left-left, which he did with some success and perfectly safely. Although impressively powerful at the time, the Elfin 1.8 was a relatively slow revving engine. In recent times, and with a faster turning modern diesel, a UK columnist tried without success to fly this design right-right, and gave up!" 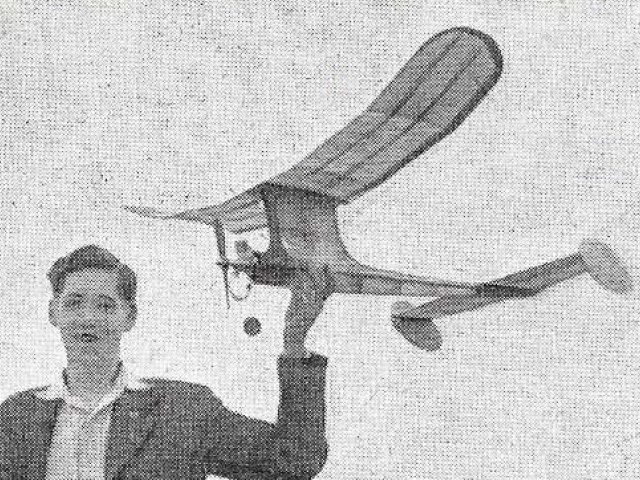 Maybe I am overlooking something but I do see, from the picture, that the wing has under camber but I do not find any reference as to the type of wing or wing rib pattern. I am very interested in this plane and would very much like to build and fly it. Any information concerning the wing style would be appreciated.
Clark - 01/08/2019
Have a look at RC Library https://rclibrary.co.uk/title_details.asp?ID=1856 where you can download a free copy of Aeromodeller June 1950. I can find no reference to the aerofoil used on this model in the original article (p344-345), nor is there any addendum or correction later in the issue. I took a quick look through the next three issues in date order, but still found no mention of its omission. However, in the same June 1950 issue, there is a highly detailed article about the design of pylon-wing FAI models (like Sugarfoot). In the article (page 367) it says a typical aerofoil would be NACA 6409 (which had proved to be the best for light loadings), and NACA 6412 (for heavier loadings). If you google these, you will find them, for instance: http://airfoiltools.com/airfoil/details?airfoil=n6409-il
S Burling - 01/08/2019
Thank you. Your information has been extremely helpful and informative.
Clark - 02/08/2019
Aha. I had been thinking that it seemed like a simple mistake that the rib was missing (from the magazine drawing). See update and supplement file - scan showing a section of the fullsize APS plan, thanks to PeterBranigan, with rib profile.
SteveWMD - 06/08/2019
I can find no mention of the thickness of the fins on this model, has anyone built it or knows of the thickness for these items?
T Hughes - 15/10/2019
The bill of materials at top near the legend says the model requires balsa sheets in a certain number in 1/16", 3/32" and 3/16" thicknesses. You're right, the vertical tails - and what pretty curves they are! - are not specified but I'd go with 3/32", either single piece or in several pieces glued at crossed grains to help fight warping, the perennial enemy.
Miguel - 15/10/2019
Add a comment