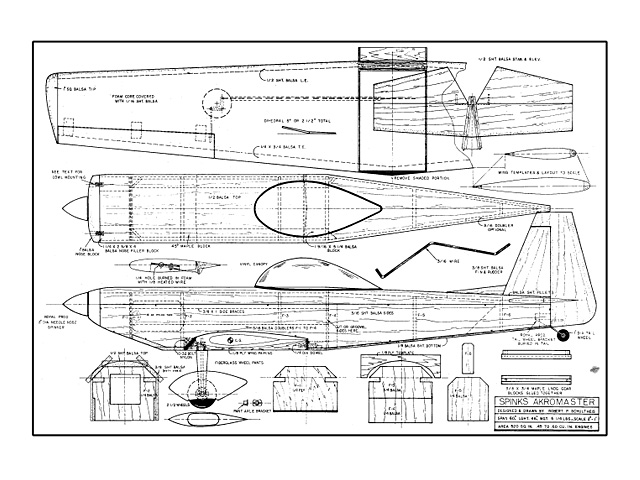 Quote: "Spinks Akromaster, by Robert Schultheis. 60-powered model has all the fine aerobatic abilities of its full-size counterpart. Lines are simple and easy to duplicate.

AFTER LAST SUMMER'S air show at Rockford, a flying buddy told me about a slick white aerobatic ship he'd seen. Not too good at names, he called it a Schlitz or Schmitz Akromaster. Well, I like planes such as Chipmunks, Zlins, and Yaks, so this was a natural for me. Then AAM (Feb 1970) published a detailed article and a beautiful scale three-view of the Spinks Akromaster. I was hooked!

The bomber I was building was set aside, and I started drawing this pretty ship with its perfect RC Class III proportions. Except for the 520 sq in wing area, the Akromaster has all the right moments. The only curve in the whole plane is on the top of the fuselage.

The symmetrical wing, as experience and other flier's comments indicate, makes for better aerobatic models. The real plane used the semi-symmetrical NACA 2413. The tail group is scale size. A few builders may question the area, but those doubts are completely dispelled after the first flight. That little stab and big elevator do a fine job. Another unusual feature is a fuselage six inches wide. Try to put that in an old multi-cradle! I usually start the motor with the plane inverted on someone's knee or in a cradle, but it can be started right side up. Holding that wide oily fuselage requires a hand like Wilt the Stilt's, but it can be done.

Formers 2, 3, and 4 are cut from 1/4 in hard balsa. The 1/4 in ply firewall (F1) can be added to the stack and all of them cut at one time. This keeps the width uniform and the notches in line. Now glue F2, F3, and F4 to one side. Also glue in F1 after attaching the motor mount. The Tatone mount is fastened to the firewall (F1) with 6/32 Allen bolts and blind nuts. Prepare the firewall to receive the motor mount and install the blind nuts. Cut 1/4 in from the bottom of the Tatone motor mount, so that it will fit under the 1/2 in balsa fuselage top. Drill another hole in the bottom of mount to replace the one cut off.

With the four forward formers glued securely to the sides, make a cut, about
two thirds of the way through, on the inside of fuselage side, behind F4. This can be done with a coarse hacksaw blade held in the hand. When the tail is pulled together, this cut enables the sides to bend at the angle shown on the drawing. It is not a smooth curve but a sharp angle. Both the three-views and photos show this.

Now bring the sides together at the rear and glue. Insert the tail block. Run some glue on the previously notched sides and attach some 3/4 in triangle stock braces behind F4. Glue in F5 and F6. The fuel tank is installed next, and the lower nose pieces glued in place..." 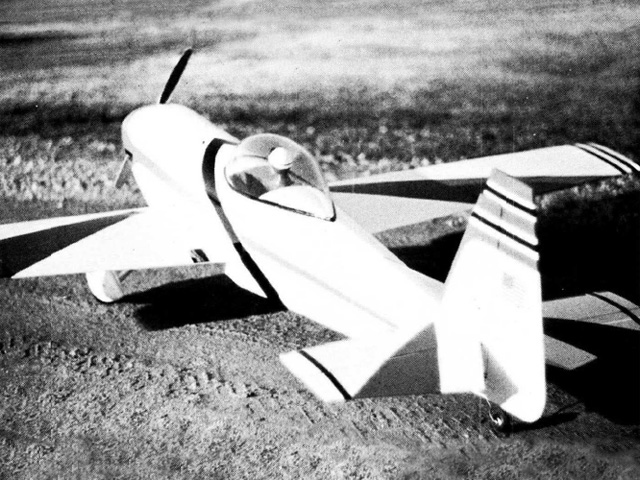