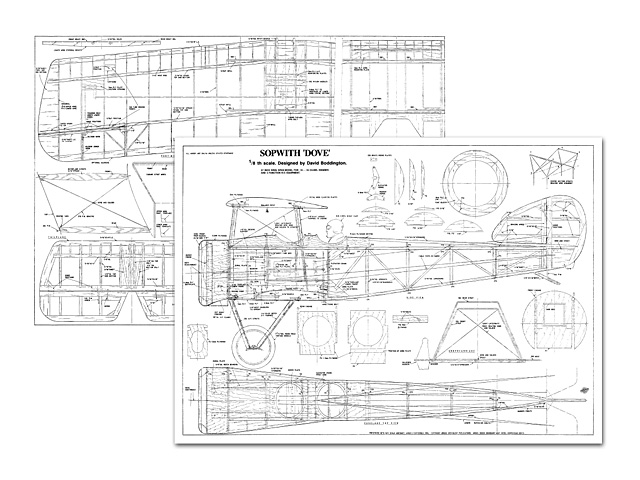 Note the scale of this plan is 1/8. But the article seems to focus entirely on an enlarged model built at 1/6 scale.

Once again we offer you a dual-sized option on the FREE PLAN.

Introduction: Prototypes of the Dove have been built and flown in both scales and it has proved to be equally delightful in either size. For the larger version all you have to do is to get the FREE PLAN enlarged at a Copy Shop by 133%. Alternatively, you can purchase the drawings from the ASP Plans Service.

You will see on the small scale drawings references to the equivalent sizes from the larger version. In most cases the sizes are a direct reduction and no drawing changes are required. Where the changes do not result in an exact equivalent, ie 3/32 to 1/16 in, the difference is so small that it only represents a line thickness.

Andy Ward, who built the 1/6 scale model, kindly added his construction notes, where he varied the methods and for the flying. Take particular note of his comments regarding the structure of the tailsurfaces - it is essential to keep the tail end as light as possible. To this extent, for the smaller version, the fuel tank (mustard tin type) can be fitted in the cowl area - the nicad battery, too. Incidentally, the 1/8 scale model was flown without aileron control. Commercial items suitable for the 'Dove' include Chart vintage wheels (3-1/4 in dia and 4-5/8 in dia respectively) also the Chart Sopwith Pup aluminium cowl for the 1/8 scale model. As mentioned by Andy. the Flair aluminium cowl needs to be reduced in diameter, you could cut a small segment out of the bottom of the cowl and rejoin.

The general description and building instructions are followed by Andy Ward's personal findings.

A delight of Doves: Of course, the Sopwith Pup is better known and more popular, so why choose the two-seat derivative to model? For one thing. I had designed a 1/8 scale version and had always intended to build a larger version, even as far as drawing up the wings for a 1/4 scale model. The pup is a delightful model to fly and the Dove is, if anything even nicer. There is also the advantage of the wing sweepback which moves the safe balance point rearwards and means that you are less likely to finish up putting large lumps of lead in the nose area. Nevenheless, you should still concentrate on keeping the tail end as light as possible and conversely don't worry too much about weight of the dummy engine up front. (See Andy's comments regarding the construction of a lighter tailplane for the 1/6 scale version),

The real clincher as far as the Dove was concerned was the arrival of the July 1991 issue of Aeroplane Monthly. On page 391 were two delightful colour photographs of the glorious Skysport reproduction of the Dove G-EAGY. When I drew up the 1/8 scale Dove, published in the '84 Scale Special and built by my nephew Matthew, there was not too much information available on colour schemes and the model was finished overall in 'natural linen'. The Skysport example is finished in a most pleasant combination of natural linen, natural wood and what I can only describe as a 'Dove' grey upper surfaces. Together with the engine turned aluminium and registration letters on white panels, it is an absolute 'natural' for modelling.

No attempt has been made to bring the Dove to super-scale standards. the outlines are as scale as I can make them from the information available, but the wing section is a compromise flat bottom aerofoil. Wings are one piece to allow for easier construction and rigging, the wings are not fully stressed to fly without the bracing wires, so do fit them. The model is small enough to fit in most cars without derigging so make the charging socket accessible with the plane in flying state.

With the rotary engine prototypes the area of difficulty, when it comes to flying scale modelling, is with the short nose cowl. There is precious little depth in which to hide the engine when the engine bulkhead is in the scale position. This leaves a number of options. You can cheat and extend the cowl length, or at least have the propeller driver further in front of the cowl than is strictly scale. The latter answer is suggested on the drawings where the Irvine 40 two-stroke (diesel) is shown. You don't have to use a diesel, I just happen to like them and believe they are a better answer for this type of model in respect of the ability to swing a large propeller, the fuel economy, the sound - and the smell!

If you are thinking of fitting a four-stroke engine you will have to recess the engine bulkhead; this will allow you to use a standard radial engine mount (but don't forget the side and down thrust). With a rear induction four-stroke it also gives you a better opportunity to fit a dummy rotary engine with a minimum of the model engine showing. If you want to fit a convincing dummy engine to a front induction engine you may need to set the engine back and fit a prop extender.

Do not be fooled into thinking that with a great big hole in the front of the cowl, good engine cooling is automatically guaranteed. Air will always take the path of least resistance and we must therefore channel the incoming cooling air to the place required ie the cylinder head. This is where the dummy engine comes in useful as we can blank off the cowl area except for the area in front of the cylinder of the working engine - plus the front intake and cooling for the silencer where necessary. The cooling air will then take the route of over the cylinder head and out the bottom of cowl from behind the dummy engine baffle. Where no dummy engine is to be fitted, you should still fit a baffle to arrange for the airflow path to route over the cylinder.

Modellers are often concerned that so little of the propeller blade area extends past the cowl, typically with the Dove the cowl diameter is 6-1/2 in and we may only be using a 10 in diameter propeller. This means that only two inches of each prop blade sticks out beyond the cowl periphery. Not to worry, the blade area within the cowl arc is still working and the efficiency lost is quite small. incidentally, use as large a diameter propeller as the engine will reasonably turn. We can use propellers with quite low pitches e.g. 4 or 5 inch as we are not looking for high speeds: therefore a 12 x dins prop is preferable to a 10 x bins type.

Enough of generalisations, onto the construction.

Build it light and straight: Ready to start? Just before you get the balsa chips flying do take the trouble to sort out the radio equipment installation and control linkages. You can take the simple option of omitting the ailerons (she flies well on rudder, but even better with ailerons) and pushrods for elevator and rudder operation. It will look nicer it you use closed loop cable control for rudder and elevator.

Construction of the fuselage side frames is from 1/4 in strip and 1/4 in sheet, note however, that at the position of the centre section struts the balsa is only 1/8 thick, this is to allow for binding of the struts. Reinforce the lower sides, internally, with 1.5mm plywood. Arrange for the front formers to be cut to suit the engine installation.

I prefer, wherever possible, to divorce the fuel tank and fuel supply from the radio equipment and fuselage internals. On the original model access for the fuel tank is from the cowl area, into a box built into the fuselage - thoroughly fuel proof the interior of the tank box. Engine bearers, where a dural engine mounting plate is fitted. are glued to the inside of the fuselage sides. You will notice that the bearers and plate are kept as short as possible to allow for a dummy engine to be fitted over most of the cowling..."

Note this design was first published in Radio Control Scale Special 1984 earlier as Sopwith Dove (oz7558). This here is a later reprint of the same design, but modified with some interesting changes (including the addition of ailerons). 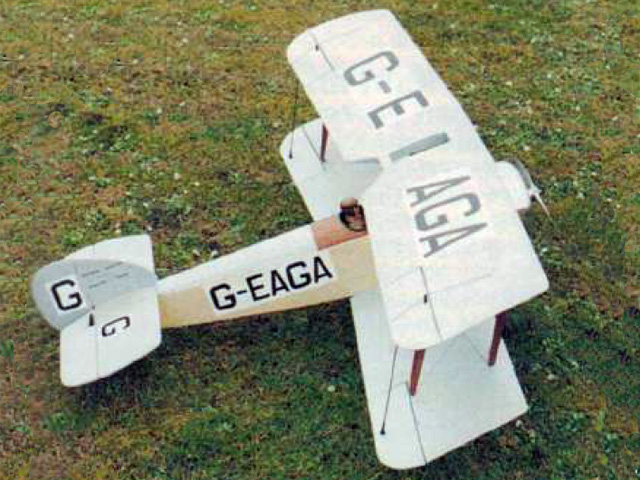