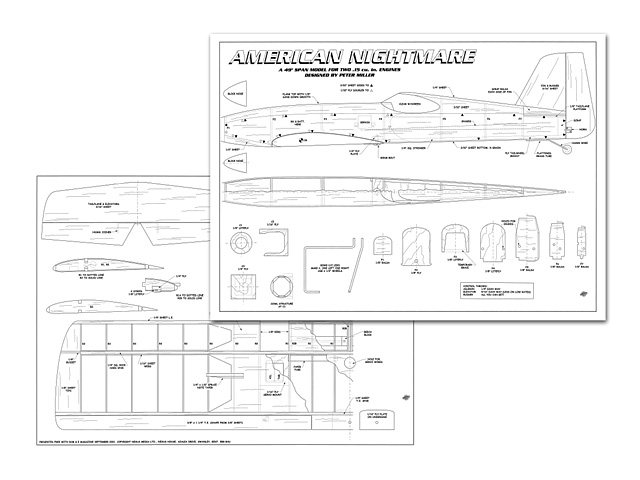 Quote: "I'd been hankering to design a twin for quite some time and had measured countless 3-views and worn out at least one calculator, all without finding a model that met my criteria. It's not that I haven't dabbled in twin design before. Several years ago a couple of small models powered by Cox TD .020s sprang from the drawing board, and I quickly discovered that lots of power resulted in a model that flew relatively fast, even on one engine. Handy, as this made them safer to fly in that condition.

Having ditched the idea of a scale model but with a practical working scale specification in mind, I promptly used the criteria in the designed of American Nightmare (I'll tell you how I arrived at the name a little later). On my 'wish list' was a wing area of 450 sq in, plus minimum drag and low weight. I also wanted the model to fly well on one engine. A Clark Y section was chosen and set at zero degrees incidence, as this provides lots of lift if you pull the nose, is very fast, and acts almost like a symmetrical section when inverted.

Horse power is courtesy of a pair of well run Super Custom .15s, each having performed very reliably in a variety of 1/12 scale fighters where they proved easy to start, displayed good reliable throttle response and provided plenty of power.

ON ITS HEAD: If I didn't put this bit first you'd only go to the end to find out how the model flies, so I'll save you the bother! We fly from the remains of an old wartime airfield once every three weeks and I had nearly got the model finished when the club secretary advised me that the coming weekend was 'our' time. I had the model complete and ready to go by Saturday, albeit in an all-white finish as I hadn't had time to complete the trim.

Sunday was perfect - calm, sunny and not too cold. The engines were run up and adjusted, and with heart in mouth I placed the model on the runway. At a nod from me my assistant released her and I was treated to a rapidly vanishing rear view of American Nightmare. I soon discovered that the model is very, very fast and on that first flight even low rates were a bit too much. The Nightmare went like a rocket; aerobatics were great - big, smooth and fast - at times I was as near as only ten seconds reaction time behind the model! Of course, you can throttle back - it doesn't make a lot of difference to the speed but it makes you feel as if you're in control. The starboard engine was a fraction rich, and after a period of running at reduced throttle it stopped - I could now find out what she was like under asymmetric power. In practice the rudder keeps the model straight, and it can be safely turned away from the dead engine. Turning towards the dead engine produces an instant spin - throttle back and it stops at once, allowing you to pull out safely. Try this high up, though!

The landing was fast and flat, it can be slowed down more but she likes to come in smoking the tyres. I walked back from that flight feeling just as if I'd had my first run on the biggest roller coaster in the world. I think 'stunned' would be an understatement!

My camera pilot Stuart Pickett was to make the second flight with reduced throws. He soon got used to the model and made several runs at half throttle. My Canon lens with predictive autofocus just couldn't keep up with it, in fact, I took just three 'useable' photos when I usually expect at least 20 out of a 24 exposure film. Once the photos had been taken Stuart proceeded to fly a full range of aerobatics, all at half throttle, before landing the model with both engines still running.

On the third flight I flew all the aerobatics; loops and bunts are easy, smooth, and track dead straight. Rolls are fast and axial in both directions. Flicks are not too fast due to the weight out on the wings. Inverted is easy and needs almost no down trim at all. The model is very forgiving, at no time did it try and bite except on one engine, but that's to be expected. And the best part? The sound of those two engines on song at full power in a long, low fly-past. Boy! It really makes your toes curl.

CLEAR THE BOARD: Anyone building this model will have quite a lot of experience (no beginners allowed!) so I'm not going to give detailed instructions except where they are really needed. The fuselage is exceptionally simple, the only slightly unusual feature is that the top is planked. Planking can be a little tedious but it doesn't take very long, honest! The main thing is to chamfer and taper each plank to fit; this saves quite a lot of gap filling later. I work from each side up and the top centre down alternately, meeting half way between those points. The rest of the fuselage build is 'conventional'.

As for the tail, this is a simple sheet unit, mostly from soft balsa with the exception of the tailplane which is quite hard. You could also use hard balsa for the fin if you wanted.

The engine nacelles are designed to fit around the tank and engines used. They also house two micro servos, one for the throttle and the other for the aileron, both of which you'll need before building the wing. 3/32 balsa sides are laminated to 1/32 ply doublers and joined to C-3 and C-4 making sure that they are square. You can also fit the 1/8 top between the two formers at this stage. For added strength drill through the sides into C3 and peg with three pieces of cocktail stick each side. Prepare the nacelles for the remote glow connectors and the slanted front SLEC type tanks, the pipes of which come out at the top of C-3.

The bottom hatch is made from 1/32 ply with the grain across the fuselage and a stiffener in the tank bay area, whilst the rear portion curves round and covers the servos. Temporarily fit the engine mount..." 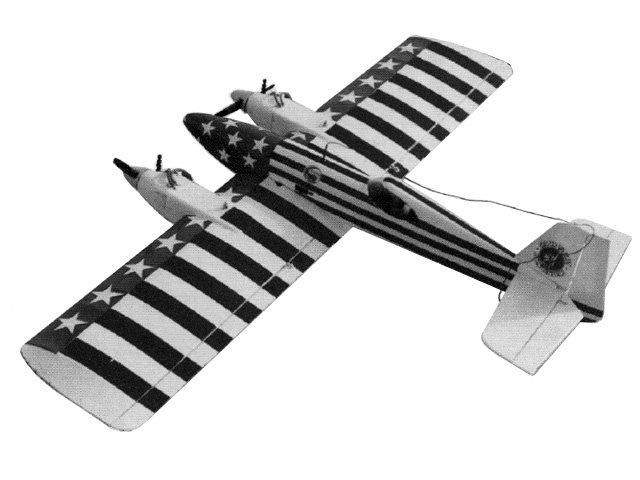