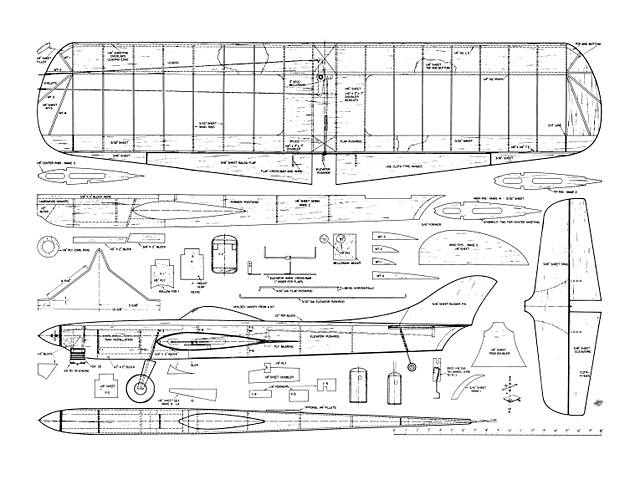 Did you ever see a real live dolphin in action? He can be agile, fast, slow, playful or very graceful according to the situation - well, so can this 'Dolphin.' Our control line stunt plane was designed to fill in the gap between the deluxe jobs and the profiles and yet be capable of competing. The original, called 'Poorboy,' was flown in 1960 and is still going strong as a work horse demonstrator, flying formation and even some slow combat. Needless to say it shows battle scars.

This plane may seem like a step backward to some experts and those who have had contact with my previous designs, but I say, Not so! There is a need for simplicity to enable those with the desire to move forward and show they can do Precision Aerobatics.

After watching John Kari of Finland perform at the last World Championships and then looking over his plane I was sure there was a place over here for simplicity, too. In my mind this little fellow is the greatest but his plane wouldn't get much attention at one of our American contests - just points!

Economy and ease of building were large factors here with as little shaving of performance as possible. How much does the built-up elevators, the swept leading edge, rudder airfoil, cowling and other features of the more elaborate stunt jobs help? Who knows? I will be the first to say these are important if you are in high-caliber competition shooting for the top. But this super group is small in comparison to the many who are ready to put their profiles away (did you ever see a profile win a top level contest?) and move up the ladder but would shy away from a time-consuming, elaborate deluxe offering.

The Dolphin fills their need and can even get them well toward the winners circle with some precision aerobatics. The Dolphin design did not get a chance to prove itself in competition until the summer of 1964. It was unde-feated in the hands of 14 year old Dickie Bishop of Paris, Ky. Earlier in the year Dickie had worked hard with a Shark 15 to master the pattern. Dickie and his Dolphin won contests in his age group at Memphis, Nashville, Louisville and Dayton. Although Dickie couldn't do a loop in 1963 his hard work and preparation with the Dolphin paid off with a 2nd at the Nationals with a Shark 45 (oz4557) he had finished only a week earlier. Hank Delzelan of Kokomo, Ind, also had fruitful results with his Dolphin.

Before building any model I feel that one should evaluate his motives and just what is to be expected from the finished product. This plane can be built in little more time than a combat job and still be a real jewel for training, fun, formation flying, slow combat or throttle flying. On the other hand with a little extra work with nice fillets, wheel fairing and/or pants, 3/16 sq strips at each corner of fuselage to allow additional rounding, a cowl and full-house cockpit, you can get in there and compete with best of them as Dickie did.

FLYING: I do not suggest you do as I did on my last test flight - fly formation with two other Dolphins, but you should have faith in your model, know that your engine runs well in all positions, that the controls are free, tracking is good and the plane is warp free. Light winds are preferred so that you can get to know the true characteristics of the plane and be able to make flap and elevator corrections or add weight to improve the balance point. Balance has as much to do with sensitivity as any other factor. If the model seems sensitive to you, add weight to the nose to get the flight characteristics that best suit you. The plane should grove well and not have a tendency to climb or dive when held in neutral flight. If the plane tries to climb you may need to bend both flaps down. This is a tricky one, but think about it - the opposite is true for a tendency to dive. The flap has more area and so seeks neutral as the plane passes through the air thus forcing the elevator in the opposite direction.

Here's hoping all your Dolphins are good little flippers!" 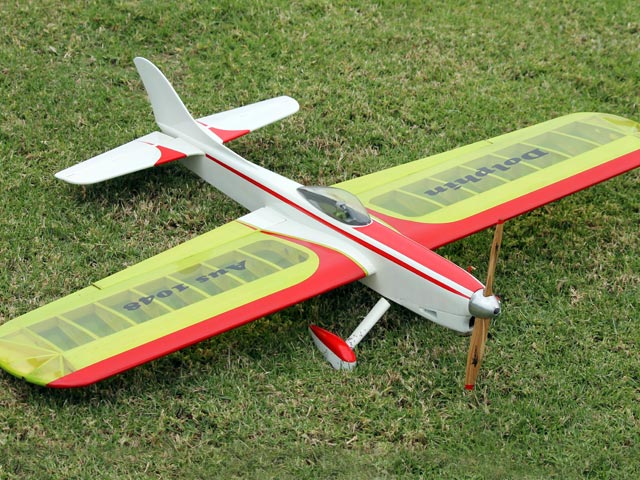